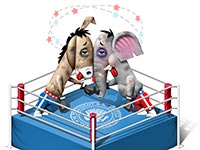 Is it possible to bring back civility to the presidential campaigns?

The very headline suggests we have an uphill battle convincing most people that civility and etiquette are still possible in American presidential campaigns — since we felt obliged to highlight the word "is." Most people believe just the opposite, that incivility and negativity are the rule and can't be changed.

Keep up to date with AARP's Election 2012 blog.

As public affairs consultants now working together, we have a unique vantage point for this election year.

You can send an email to your local TV station managers letting them know they don't have to air deceptive third-party ads. Go to the Annenberg Public Policy Center's website flackcheck.org and click on "Stand by Your Ad."

George Washington University's School of Media and Public Affairs is rolling out an interesting and carefully researched new fact every day during the presidential campaign, including video. Go to facethefactsusa.org.

We're especially concerned with citizens and their disaffection with politics. We are also alarmed by the overemphasis on negative attack ads by President Obama and Gov. Romney and have decided it's time to speak up. The nasty deluge of negative ads during the Republican primaries was just the start. Since then, the two candidates and the super PAC organizations supporting them have spent more than $100 million attacking each other's character and motives — and that's just in the swing states. Obama's ads accuse Romney of not caring about American workers because he allowed his former company, Bain Capital, to invest in companies that outsourced jobs to foreign countries. (Put aside that Romney was indisputably working full time in Utah to save the 2002 Winter Olympics from a corruption scandal and was uninvolved in Bain's management.)

And Romney accuses Obama, in effect, of being a liar because he promised to reduce unemployment to below 8 percent, which he has not done. (Put aside that Obama inherited a high unemployment rate and a national recession bordering on the Great Depression when he took office in January 2009.

Next: Do candidates pay a political price for negative ads? »

So why do we believe that civility and etiquette are still possible? We know that negative ads work. But we also know the reason they work is that they're almost always ignored by the subject of the attack for fear of giving the attacks more publicity. (Remember John Kerry's decision to ignore the 2004 Swift Boat ads?)

There is also evidence, however, that if the candidate under attack challenges the accuracy of the ads head-on, proves it and keeps at it, the candidate continuing to go negative will pay a high, even fatal, political price.

That lesson in Virginia can be a national model in 2012.

Older Americans, more than most, take their elections seriously and are fed up with the negativity. All of us — young, middle-aged and older — can demand that Obama and Romney stop the food fight. We can demand that, instead, they debate the issues. Give us specific ideas and specific solutions for America's most pressing problems — big solutions for the economy, for health care, for reducing our $15 trillion national debt, for ensuring the long-term solvency of Social Security and Medicare.

Sooner rather than later, the candidates will have to listen and respond. Then our headline will turn out to be true: There will be a rebirth of civility and etiquette in American politics.

You may also like: Presidential slogans from bold to bland.