A few months ago, the AARP Bulletin produced an interactive federal budget calculator and challenged readers to try their hand at eliminating the federal deficit. The calculator noted that the federal government is projected to spend almost $4.2 trillion in 2015, but collect just $3.6 trillion in taxes and other fees, leaving a budget deficit of more than $600 billion.

See also: A Budget Out of Balance — Projections for 2015. 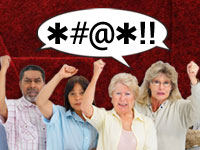 People voice their anger about the federal budget deficit.

In addition to working through the menu of deficit-trimming options in the exercise, more than 1,000 readers (at last count) also offered up their own ideas for stemming the government's red ink and putting the nation's finances in order.

Here's a rundown of some of the more popular and provocative proposals that landed in the hopper.

What do you think about these ideas? Good? Bad? Ugly? Post your comments below.

The calculator offered the option of cutting congressional and White House budgets by 15 percent, which would shave about $800 million from the budget. Many commenters wanted to go much further,

especially targeting the pay and benefits of Capitol Hill lawmakers, who make $174,000.

While these givebacks might have a certain sock-it-to-'em appeal, their fiscal impact would be small.

The budget calculator offered readers the option of reducing military spending by nearly $164 billion, to be achieved by reducing troop levels in Iraq and Afghanistan and eliminating some weapons systems, among

other measures. Many commenters argued for even more dramatic cuts in the Pentagon's budget, which the Obama administration projects will grow to $616 billion by 2015. Some commenters said that defense spending should be cut in half, an extreme move that would reduce the federal deficit by $308 billion.

Others had specific ideas about what to eliminate in the defense budget — for example, closing the more than 700 U.S. military bases abroad and bringing home all the personnel, planes and ships stationed overseas, which, by one estimate, cost the U.S. about $250 billion a year.

"We do not need troops in Germany and Japan anymore and whatever other countries they are in," one commenter wrote. Others called for an end to the U.S. military presence in Iraq and Afghanistan, which might save $118 billion, not counting the cost of removing troops and equipment.

A self-identified retired government employee proposed eliminating maintenance contractors and using active duty personnel to paint, clean and perform other routine duties. This do-it-yourself approach would probably save about $14 billion in 2015 (assuming a 10 percent savings from the $140 billion a year — yes, that's billion — that the Defense Department spends on service contractors).

The isolationist impulse didn't stop with the defense budget, and U.S. spending that's aimed at helping other countries was an especially sore spot. Many commenters advocated cutting foreign aid by 50 to 75 percent; some advocated eliminating it.

"We have no business sending money that we have paid in taxes to other countries when we should be spending it in the USA," one commenter complained.

A few aggrieved readers were under the mistaken impression that the U.S. government gives aid to such nations as China and Venezuela. (It doesn't.) But eliminating U.S. government spending on a wide array of

assistance to other countries — including disaster assistance, food aid, organizations such as the Peace Corps, and support for anti-narcotics programs — would trim nearly $36 billion from the deficit, according to a report by the Agency for International Development.

Quite a few commenters argued that the best way to slash the deficit would be to stop the government from doing many things that it currently does.

One commenter, for example, proposed abolishing the following departments:

Another target was the Environmental Protection Agency, which accounts for $9 billion in the federal budget. Even the 65-year-old National School Lunch Program ($13.6 billion) took a hit.

Abolishing all of these departments and agencies — assuming that they could actually be done away with by 2015 and that their functions wouldn't be transferred elsewhere — would slash the federal deficit by more than two-thirds.

But the meat-cleaver approach leaves a lot of unanswered questions. How would the nation's heavily used Interstate highway system be maintained? Would states no longer provide fruit, sandwiches and milk

for free or at reduced prices to children whose families are at or near federal poverty levels? Who would make sure that our foods and drugs are safe, and that we can effectively fight infectious diseases and the like?

Lots of commenters argued that spending cuts alone aren't enough. And many of them went well beyond the revenue-raising options offered in the budget calculator, one of which was eliminating the tax cuts passed during the Bush administration.

Chief among the suggestions:

Several commenters also advocated such things as a one-shot surcharge of 10 to 20 percent on the fortunes of extremely rich people; eliminating the cap on taxable social security income; taxing the

property of churches and nonprofit organizations; and imposing taxes on carbon-based fuels.

One commenter even advocated a return to the sharply higher tax rates of the 1950s, when taxpayers in the top $400,000-plus bracket paid a breathtaking 84 percent of their income in federal income taxes. Because the wealthiest 1 percent of the population receives about a quarter of the nation's $12.5 trillion in personal income, Eisenhower-era tax rates would raise roughly $2.4 trillion in revenue — more than enough to wipe out the deficit, provided that those wealthiest Americans of all didn't flee to overseas tax havens.

On the other hand, a group of wealthy Americans who have dubbed themselves Patriotic Millionaires for Fiscal Strength have urged President Obama and congressional leaders to increase taxes on incomes of more than $1 million "for the fiscal health of our nation and the well-being of our fellow citizens."

Then there were the outside-the-box proposals that, depending on your point of view, could be seen as innovative, outlandish or something in between.

A few commenters suggested that the deficit could be erased by asking citizens to make voluntary donations. By our back-of-the-envelope

calculations, erasing a deficit of $1.4 trillion would require the nation's roughly 310 million inhabitants to cough up an average of about $1,958 apiece.

These commenters may not have been aware that quite a few Americans already make gifts to reduce the national debt. Such gifts exceeded $2.8 million in 2010, down slightly from $3 million in 2009. (Should you wish to make a contribution to reduce the debt, the Treasury Department offers detailed instructions for doing so — and, yes, you can use a credit card.)

Another commenter proposed immediately taxing increases in the value of stocks — though we're presuming that would also lead to refundswhen share prices go down. And another proposed a surtax of 1 cent per message on mobile phone texts, calculating that such a tax would raise at least $1.2 billion in revenue.

Several commenters also suggested legalizing and taxing the domestic cultivation and sale of marijuana, an illegal industry that, according to a 2006 study, generates annual revenues of nearly $36 billion. But even a 20 percent tax on marijuana cigarettes, similar to the rate on tobacco cigarettes, would shave just $7.2 billion from the federal deficit.

Another commenter recommended selling all of the 144 million ounces of gold now kept in the U.S. Bullion Depository at Fort Knox, Ky. At current prices (about $1,600 per ounce) such a sale would yield $230.4 billion, though the sudden unloading of Uncle Sam's mother lode could push the price of gold down and end up partially defeating the purpose of the sale.