Vallejo, Calif. At 11 a.m. on a Friday morning, you'd be hard-pressed to file a police report or meet with a detective in this sprawling blue-collar city of 120,000. The city's sole police station is closed to the public three days a week, and its three substations are permanently shuttered.

Drug sales are on the rise and so is prostitution on Sonoma Boulevard, one of the town's main drags. Burglaries are commonplace. Amid a rising tide of unemployment — 12 percent — and a surge of foreclosed homes, squatters have taken hold even in upscale areas.

"Vallejo is just going to pot," says lifelong resident Marti Thornton, 54. "It once felt like the town was getting itself together, but now things are really getting worse."

Situated at the mouth of the Napa River about 25 miles north of San Francisco, Vallejo holds a prominent place in California history. It was the first state capital in 1852, and for nearly 150 years was the site of one of the nation's most important naval shipyards.

In 2008, it achieved a new kind of distinction — the state's largest city to file for bankruptcy.

The plight of the tattered, ethnically diverse city, still dotted with Victorian homes from the 1850s, may presage the future for many financially strapped American cities: rising health care and pension costs colliding with eroding property and sales tax revenues in the aftermath of the recession and housing meltdown. 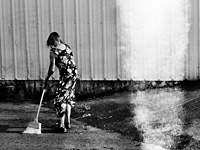 A woman sweeps the pavement of an abandoned car dealership, her home, in bankrupt Vallejo, California

But if Vallejo serves as any lesson, it's that entering a Chapter 9 bankruptcy hardly offers a panacea.

On a recent midday, the busiest retailers in the faded downtown were establishments selling medical marijuana. Dozens of storefronts stood vacant.

"When you don't see streets paved, when you see crime soaring and squatters taking over foreclosed houses, something is wrong with this picture," says Bob Sampayan, 58, a retired Vallejo police officer. He now works with the Fight Back Partnership, a community group that organizes crime watch campaigns. Its operating hours, too, have been cut.

"Vallejo has always been the affordable American dream, but now that's all in jeopardy," Sampayan says. "We can't support the local theater group, the senior citizens center or the community arts group. All the things that help make up a community are not being supported."

The city used to provide about $80,000 each year to support the Florence Douglas Senior Center, director Vicki Conrad says. She's now trying to plug the hole in the budget with private contributions and grants. Staff and operating hours have been cut, but demand for hot lunches has risen nearly 10 percent, and the center's thrift shop is busy.

"It's harder for seniors to get the resources they need," says Conrad, 72. As gas and food prices rise, homelessness among seniors is headed up, she says. And with the police cutbacks, "people are afraid to go out at night."

Next: Criminals are setting up shop in Vallejo. >>

The Mare Island Naval Shipyard, which built ships and submarines in World War II, was for decades the city's economic engine. In its heyday, the base employed 46,000 people, who spent their wages in local stores and restaurants. The rolls of city employees expanded.

The shipyard was closed in 1996, but the housing boom in the 2000s helped keep the local economy going. On the Vallejo highlands along Interstate 80, which connects Sacramento with San Francisco, acres of gleaming new subdivisions went up. Gays gentrified an area closer to downtown.

But then the recession and the housing crisis hit. Though parts of Vallejo retained an all-American allure, in others the picture turned gloomy. Construction stopped, Walmart left town, property tax revenues took a dive. With expensive labor contracts to fund, Vallejo found itself with a budget that didn't add up.

City leaders couldn't summon the political will to boost taxes in the middle of a slowdown. And when the gaps proved too big to close with conventional steps, Vallejo opted for the radical: In May 2008 it filed for protection in U.S. bankruptcy court.

Municipal bankruptcy remains quite rare across America. In the more than 60 years since Congress established a federal mechanism for the resolution of excessive municipal debts, only about 600 cities have filed for protection from their creditors.

Vallejo officials entered a protracted court battle with unions in an ultimately successful battle to reduce city workers' wages. The city burned through more than $8.3 million in payments to lawyers, court records show. The bad news has continued. In a court filing in January, Vallejo's lawyers noted that the city's unfunded pension liabilities totaled $195 million while overall revenues from property and sales taxes had dropped from $83 million to $65 million since 2008.

The city has outlined a five-year recovery plan. It has agreed not to disrupt pensions for former city employees but has cut payments for accrued sick leave or unused vacation time.

Jobs and services are being cut to the bone. With only a handful of police officers now working the street, Vallejo has gained a reputation as a good place for criminals to set up shop, some residents say.

In light of lengthy legal battles and the economic collapse, employees should have seen the writing on the wall, says fire chief Doug Robertson, 51. "We were overblown. Salaries, benefits, the whole thing." His department, which once had 122 members, now has 65. Three of nine firehouses have been permanently closed. Firefighters took a 25 percent pay cut and must do more work with fewer resources.

As a police siren wails in a downtown neighborhood on a recent day, credit union employee Alain Norris, 37, says that given the economic collapse around him, he's been lucky just to have a job. But for now, he says, "really, the only thing I like about this place is the weather."

Michael Zielenziger writes on business and the economy. He lives in the San Francisco Bay area.