Despite signs the economy is brightening, state governments face a fourth straight year of financial crisis. To balance their budgets over the past three years, officials have cut programs that help their most vulnerable residents, including older people and the disabled. They've hiked university tuitions and sliced K-12 school spending. They've laid off hundreds of thousands of public employees and pared workers' benefits and pensions.

It took all this and more to close $430 billion in state budget gaps during the worst economic period since the Great Depression.

But more tough decisions and deep cuts lie ahead. On the chopping block are programs that Americans rely upon from cradle to grave: Many states are slashing child care assistance, and at least one state, Virginia, will eliminate the fund that paid for indigent burials.

"Everything is on the table — and it has to be," says Chris Whatley, deputy executive director of the Council of State Governments, a nonpartisan policy research group based in Lexington, Ky.

Forty-four states and the District of Columbia are projecting $122 billion
in budget shortfalls for fiscal 2012, according to the Center on Budget and Policy Priorities, which reports that nearly every state plans to spend less in 2012 than in 2008, after inflation. 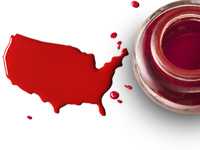 State budgets are "in the red."

Fiscal 2012, which starts July 1 in most states, "is shaping up as one of the most difficult budget years on record," according to the center, which advocates fiscal policies that help low- and moderate-income people. And some states are predicting deficits totaling $75 billion in fiscal 2013, which starts in July 2012.

"These are painful cuts," California Gov. Jerry Brown, D, said in March as he signed $11.2 billion in spending reductions to programs benefiting the poor, the sick and older people, to close a $26.6 billion deficit in the 2011-2012 budget. "It hits vulnerable people. It's not the kind of thing I like doing ... But when you have a deficit, you have to."

But, the governor warned, "the next round of cuts will be much more painful and much more disruptive."

Next: What's involved in state budgeting? >>

Similar refrains echo in statehouses coast to coast. How did we get here?

To understand that, here's a quick course in state budgeting: Almost every state requires the governor to submit, and the legislature to pass, a balanced budget. Because most states can't run a deficit the way the federal government does, they must reduce spending, raise taxes or use reserves, often called rainy-day funds.

The largest share of state revenue — 43 percent — comes from general funds, such as state income and sales taxes. Another 30 percent comes from the federal government. Other state funds, such as a gas tax dedicated to a highway trust fund, make up about 26 percent, and bonds about 2 percent of revenues, according to the National Association of State Budget Officers (NASBO).

After the recession hit in December 2007, income and sales tax revenues tanked, while the demand for services — from the Children's Health Insurance Program to unemployment benefits — soared. State budgets actually grew, thanks to $151 billion from the American Recovery and Reinvestment Act of 2009, commonly known as the stimulus act, which provided enhanced funding for Medicaid and other programs.

Medicaid covers almost one in 20 Americans. Best known as the health insurance program for the poor, Medicaid is also the nation's biggest payer of long-term care, covering 40 percent of the nearly $180 billion-a-year cost.

AARP has offices in every state monitoring budget deliberations. JoAnn Lamphere, AARP's director of state government relations for health and long-term care, says most of the deepest cuts proposed for Medicaid last year were avoided by infusions of federal stimulus money, most of which runs out July 1.

"AARP members should pay attention to the very serious budget decisions taking place in their states and be careful to avoid a knee-jerk judgment of what's good and bad," Lamphere says. "They would be wise to think of the value of public programs in their lives — for example, Social Security, Medicare and Medicaid."

Whatley, of the Council of State Governments, says, "Medicaid is eating public education. States are gutting pre-K. Secondary education has taken the deepest cuts of all. In some ways we're borrowing from one generation to pay for another."

Next: How is Medicaid driving the states' budget problems? >>

Because Medicaid is a joint federal-state program, federal law prohibits states from tightening mandatory income eligibility standards. Some states have dropped optional state programs, such as payments for eyeglasses and adult dental care. Some are considering reducing payments to doctors, hospitals and nursing homes. In some states, nursing homes warn that they could be forced out of business if payment rates are cut. Some states are seeking waivers from federal requirements so they can shrink Medicaid rolls.

Ironically, however, cuts in programs that help older people stay in their homes could result in more people having to move into nursing homes, which typically cost twice as much. For example, one way California is curbing spending is by reducing the number of hours it will pay home aides to help people bathe, dress and eat. It is also considering reducing or eliminating funding for the Adult Day Health Care program.

"It's a very scary time for seniors who are in need of support services to stay in their homes," says Marilyn Ditty, executive director of Age Well Senior Services Inc. in Laguna Woods, Calif. "Cutting these programs may be a short-term solution, but the cost to the state over the next few years would be much greater."

Age Well is a nonprofit that provides a range of services to seniors in Orange County. The program helps fragile older people with significant health problems — such as diabetes, stroke and heart conditions — manage their health while staying in their own homes. Patients receive medical treatment, physical therapy, social services and meals. The program, which has more than 300 centers statewide and serves about 27,000 people, costs each patient about $72 to $86 a day, paid by Medi-Cal, California's Medicaid.

Few patients could afford the services themselves, so cutting state support could force many into nursing homes, says Ditty, a gerontologist for 30 years.

Across the country in rural Meadville, Pa., Cindy Hall, who manages the Medical Assistance Transportation Program in Crawford County, is also concerned about potential cuts. The program is funded by state and federal money and uses volunteers to drive Medicaid patients to doctors and treatments. The volunteers, who are retirees, are reimbursed for mileage — more than 900,000 miles a year. The budget is $1.7 million.

"We have a lot of people out there who are sick and couldn't get to doctors" without MATP, says Hall. There's no taxi service in the county.

Also in Meadville, Lorie Darcangelo is bracing for cuts in the Special Supplemental Nutrition Program for Women, Infants and Children (WIC). Darcangelo directs a three-county WIC program that serves 4,000 women and children. The state health department has told Darcangelo to expect a reduction.

Next: Some analysts see hope down the road. >>

"I just don't know when or how much," she said. The Republicans in the U.S. House of Representatives targeted WIC for a 10 percent cut from last year's spending level. The measure failed in the Senate, but the uncertainty for next year concerns Darcangelo.

"Cuts in WIC may look good this year as a way to keep the political promises," she said, "but are the politicians really thinking about the far-reaching consequences?"

While public employee pensions have gotten a lot of attention, they account for less than 4 percent of most states' budgets. But unlike areas in which states have the discretion to make cuts, pensions must be paid.

Despite the political unpopularity of such a move, more than 30 states have raised income, sales or business taxes since the recession started, according to the Center on Budget and Policy Priorities. A few states, however, are going the other way, lowering corporate taxes in hopes of spurring economic growth.

"That's like saying you can run faster if you cut your foot off," says Jon Shure, deputy director of the State Fiscal Project at the budget and policy center. Cutting taxes will only make deeper spending cuts necessary, he says. The center urges governors to use rainy-day funds or raise taxes to replace lost revenue.

But Tad DeHaven, a budget analyst with the Cato Institute, which favors limited government, blames the states' budget woes on one simple cause: "They spend too much."

The states, he says, are "looking to Washington to bail them out" when the federal government already provides one-third of state revenues.

States have been too generous with employee benefits, DeHaven argues. Half of the total annual spending by state and local governments goes to employee compensation, according to the U.S. Bureau of Economic Analysis.

"Previous politicians have made promises that current politicians are on the hook for," DeHaven says.

While the states' financial picture is bleak, some analysts see hope down the road. More provisions of the health reform law will take effect in 2014, including an expansion of Medicaid to include certain adults under 65. The federal government will pick up the cost of covering the newly eligible recipients for the first few years.

"We're moving in the right direction," says Ron Pollack, executive director of Families USA, a group that represents health consumers. "Significant relief has been provided and more is on the way through the Affordable Care Act."

What's needed most, say Pollack and other analysts, is economic recovery. But no one knows when that will come.

Marsha Mercer is a freelance writer based in Virginia who covers public policy issues.