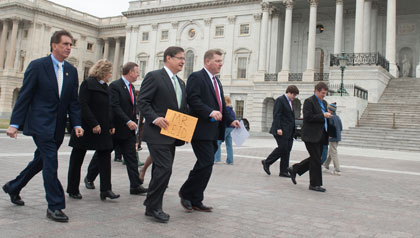 In the form of a hand-delivered letter to Majority Leader Harry Reid, a group of House Republican freshmen called on the Senate to pass a long-term continuing resolution with spending cuts.

The new kids in town have stormed in with plans to upend Washington, slash spending and shrink government.

See also: If the government shuts down.

How that gigantic class of new members of Congress meshes with Washington realities in coming weeks could determine whether the government is shut down, defaults on its debts or takes a small step to closing the gigantic budget deficit. 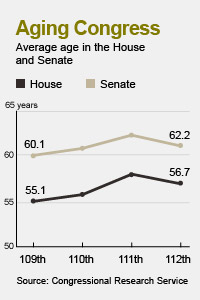 The freshman class sworn in on Jan. 5 includes a large group of 50-plus Americans — eight of the 14 new senators and more than 40 of the 94 new House members. Most of the new lawmakers over 50 are Republicans, carried into office on a conservative wave of voter anger over deficit spending and government regulation.

The 50-plus newcomers have given an even harder edge to the antispending rhetoric. That stems, in part, from a black-and-white mentality that many of the new members bring from the business world, which makes them less likely to defer to congressional leaders than would people trained in politics, says American Enterprise Institute scholar Norman J. Ornstein. They have a visceral distaste for government and call for big spending cuts without fully understanding their impact, he says. They will bring those strong views to the votes on the debt limit and on whether to shut down government. "But now you're playing with live ammunition," Ornstein says.

That live ammunition is the high stakes of decisions before Congress, namely whether to risk a government shutdown or even default if they don't reach their budget-cutting goals. Those are pressing issues that gave freshman Republicans an opportunity they couldn't pass up. Frustrated with what they regard as Senate Democrats' unwillingness to act on their proposed budget cuts, a group of 10 Republican freshmen marched to the Senate and taped an envelope addressed "To Mr. Reid" on the door, targeting Senate Majority Leader Harry Reid, D-Nev. The contingent included Rep. E. Scott Rigell, R-Va., 51, who told reporters he was not in a mood to compromise. "If the objective of keeping the government open is such a high priority that one is willing to accept potentially continual increases in the federal debt [through large amounts of deficit spending], I'm not in that camp," he said.

Next: Differences on the debt limit. >>

Differences on the debt limit

The group of 50-plus freshmen includes a dentist, an auctioneer, a car dealer, a roofing contractor and a pilot — and more than two dozen millionaires, according to the Center for Responsive Politics. It also includes an unusually large number of people without any political experience. "For some of them, I wonder if this is what they thought they were getting into," says Democratic Rep. Karen Bass, a former California state House speaker, noting the difficulties of changing an institution that's been around for more than two centuries. "It's not going to happen as fast as they thought."

The new freshmen 50 and older say they've run into many surprises in Washington, from the pace of the job to the lack of comity between parties.

Of more than a dozen older freshmen questioned by the AARP Bulletin, one thing they agree on nearly unanimously is that the nation's unemployment is among their top priorities. Few of those who answered a Bulletin questionnaire or were interviewed say they plan major changes to Social Security. But many of the Republicans would like to repeal the health care reform law passed last year.

Soon they will vote on whether to extend the nation's debt limit. The strength of the entire freshman class sworn in this January — 14 in the Senate and 94 in the House — could tip the balance on whether it passes.

"We need less government and more innovation. We need fewer agencies and regulations that burden small businesses," says Rep. Paul Gosar, R-Ariz. He says he will vote to raise the debt limit only if "there are significant benchmarks in place that cut spending and tie it to a balanced budget."

Freshmen like Rep. Steve Pearce, R-N.M., are leery of increasing the debt limit. He says he will vote only for small expansions of the debt ceiling, and only if they are combined with budget cuts. "We must not forget the fact that the federal government has been addressing the debt by printing more money, which robs seniors of buying power."

Sen. Richard Blumenthal, D-Conn., says the debt limit must be raised because defaulting would "have devastating consequences for our economy."

Brookings Institution senior fellow Thomas Mann says the large freshman class makes a shutdown and debt limit failure more likely. The lack of previous political experience for many of them also is a factor, he says.

"It makes them inclined to set unrealistic goals and to avoid the kind of genuine deliberation that is essential to good policymaking," Mann says.

Joseph Unekis, associate professor of political science at Kansas State University, agrees. "The people coming in right now are in no mood to compromise."

Next: Many are loath to change Social Security. >>

Many are loath to change Social Security

But freshmen like Rep. David B. McKinley, R-W.Va., a former state legislator, says the newcomers have a clear message from voters. "They want government to spend less, stop government overreach and create an environment where the economy can get moving again."

Unekis says, though, that the freshmen don't seem inclined to tackle entitlements like Medicare and Social Security or other spending beyond domestic discretionary programs.

"If you're really serious, you go after the biggies or you increase taxes," Unekis says.

Many of the new lawmakers are loath to outline changes to the popular Social Security program, which has long-term funding imbalances. Rep. Reid Ribble, R-Wis., says benefits for current and near retirees need to be protected, but he's open to an "adult conversation" about the program.

There are some exceptions, including Rep. Mike Kelly, R-Pa., who says Congress ought to consider increasing the retirement age for future generations because people are living and working longer now.

Some of the freshmen want the health care reform law thrown out entirely. Rep. Tom Marino, R-Pa., says the current law is killing jobs. "Employers are fearful of it and hesitant to hire workers or to invest in their businesses because of the extra costs associated with this program."

Many of the Republican freshmen like Marino would like instead to tackle tort reform and allow people to buy insurance across state lines.

Sen. Robert Portman, R-Ohio, says that even though he would rather repeal the law, that idea is unlikely to get past the Democratic-controlled Senate and White House. Smaller, piecemeal changes to the law have a better chance of passing, he says.

Freshmen from both parties support a change that would reduce bookkeeping for small businesses affected by the health insurance requirements. But the larger question of repeal breaks down largely along party lines.

Sen. Joe Manchin, D-W.Va., says it doesn't make sense "to throw out the good parts of this bill — like closing the prescription drug doughnut hole for seniors, requiring coverage for preexisting conditions and allowing adult children to remain on their parents' coverage."

Next: Surprised by partisanship. >>

Manchin (who was sworn in last November because he was filling a vacancy caused by a death) and the other freshmen have been in for many surprises during their first months in office. For Manchin, it has been how rarely senators talk with colleagues from the other party. He started hosting lunches with a Republican senator so they can get to know each other.

Liberal Democrat Bass chose a conservative Republican — Michelle Bachmann, R-Minn. — to work with on legislation to improve foster care, an issue important to many grandparents.

The lack of bipartisanship was a shock also to Rep. John Carney, a Democrat who served as lieutenant governor of Delaware. "Here in Washington, the hyper-partisanship is discouraging," he says.

Rep. Frederica Wilson, D-Fla., agrees. "I didn't even realize until last week that there are two entrances to committee hearings — one for Democrats and one for Republicans," she says. "It needs to stop. If we could refocus our efforts from fighting against each other to solving problems together, we would be able to solve the budget crisis."

For lawmakers like Bass, the "sticker shock" of Washington costs have been a surprise. Rep. Vicky Hartzler, R-Mo., said the learning curve includes pedestrian challenges like navigating the maze-like tunnels under the Capitol complex between the Capitol building and the office buildings.

Other freshmen say the time demands of balancing votes, constituents and committee work have been daunting.

Gosar says it's like a hyped-up version of his old job: "It is like being a dentist, but with 100 more chairs."

Tamara Lytle is former Washington bureau chief for the Orlando Sentinel. Talia Schmidt is a graduate intern with the Center for Politics and Journalism.