It's bad enough having a car stolen, but for several Memphis, Tenn., residents who fell prey to auto-related crime in recent years, that wasn't the end of their ordeal.

Instead, residents who went to recover their cars often discovered they'd been struck twice as the city's impound lot faced a seemingly endless spate of crime.

The problems were so pervasive that over a recent three-year period, the city paid more than $70,000 to settle claims from those whose cars were damaged, stolen from or mistakenly sold while at the impound lot.

The kicker: Memphis police have charged an impound shift manager — whose job was to protect the 13,000-plus cars brought in annually — with burglary.

"Through no fault of their own, these people were victimized twice, and that makes my blood boil," Mayor A.C. Wharton told the Commercial Appeal about the situation. 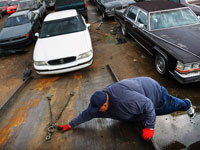 Your car may be unsafe at an impound lot.

It wasn't until early this year that Memphis officials began to understand what was going on. They installed extra lighting and surveillance cameras and soon watched as thieves nabbed everything from radios to tools and clothing in at least 10 separate acts, according to Martha Lott, director of general services for the city.

When police made an arrest, the thief brought a twist to the table. He implicated the shift manager.

The development is "very disappointing," Lott says. She attributes the problems to lax management and says changes are under way.

Memphis officials have put the police in charge of the impound lot for the time being while they investigate further.