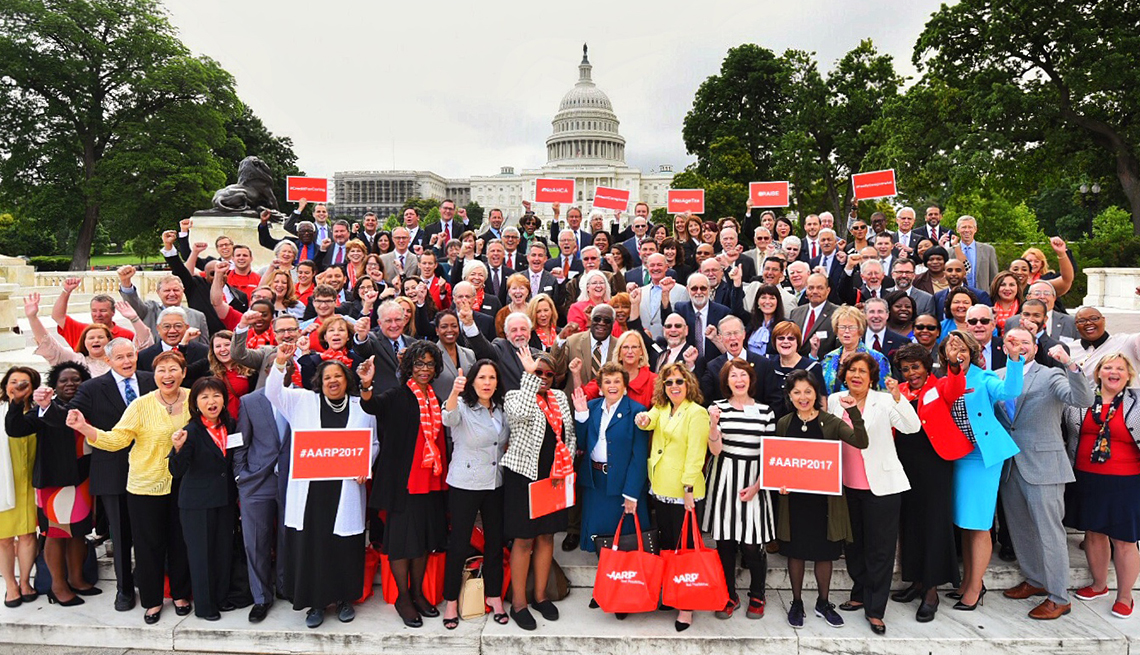 Dozens of AARP advocates from across the country converged on Capitol Hill on Wednesday, June 7, to try to persuade Congress to block legislation projected to raise costs and jeopardize health care coverage for millions of older Americans.

Directors and presidents from every one of AARP’s 53 state and territorial offices spent Lobby Day knocking on doors and meeting with their congressional representatives. Their main mission was to oppose the House-passed American Health Care Act (AHCA), especially a provision that would impose an “age tax,” which would allow insurers to charge people ages 50 to 64 five times or more what other people pay. Current law caps the charges at three times as much.

“Our volunteers and staff represent the millions of Americans who would face a massive age tax and discrimination for having a preexisting condition like asthma if the House-proposed health care bill under consideration in the Senate becomes law,” said AARP Executive Vice President Nancy LeaMond. “AARP hopes the Senate starts from scratch and that Congress also passes important family caregiving legislation.”

The more than 150 AARP citizen advocates warned lawmakers that the House bill, if adopted by the Senate and signed into law, would hurt consumers in a number of ways. According to a recent Congressional Budget Office assessment, the bill would cause 23 million people to lose their health insurance by 2026 and drive up costs for older Americans.

The AARP contingent also urged Congress to retain popular provisions of the current law, including one that prevents insurers from charging significantly higher rates to consumers with preexisting medical conditions.

“It’s really frightening that older adults, many on fixed incomes, would be charged more for receiving health care,” said Nancy McPherson, AARP state director in California, who will make the rounds on Capitol Hill on Lobby Day. “The age tax is very alarming to us. And we are concerned that people with pre-existing conditions would be eliminated from getting health care.”

Supporters of the House bill say it would cut federal costs, ease government restrictions and give consumers more freedom to find policies that suit their needs. While calling for changes in the law, some Senate Republican leaders have indicated they will write their own legislation rather than adopt the House version.

AARP recently launched television ads attacking the age tax and other provisions of the House bill. AARP has also been mobilizing members across the country to contact their senators and tell them to oppose the AHCA.

AARP, which advocates for people 50 and older, also opposes spending cuts to Medicaid, which covers low-income and disabled people.

The Lobby Day volunteers pressed members of Congress to help lower prescription drug costs and prevent out-of-pocket health care increases for older Americans. In addition, they asked their representatives to improve access to services so older people and those with disabilities can live in their homes and communities, instead of relying on institutional care.

What’s more, they showed support for the Credit for Caring Act, which would provide a tax credit of up to $3,000 for eligible working caregivers who care for family members of all ages.