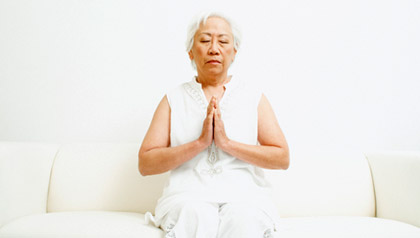 Meditation may be able to improve your memory as you age.

En español | Many people believe that our brain is fully formed by the time we're adults. But over the past decade or so, neuroscientists have discovered otherwise: Throughout life, the brain rewires and reshapes itself in response to experience, environment and training.

To me, one of the most exciting discoveries has been that meditation seems to be a significant and positive brain-changing activity. Consider the evidence: A study by Harvard University and Massachusetts General Hospital in 2005 showed that a group practicing meditation for about 40 minutes a day had measurably thicker tissue in the left prefrontal cortex, an area of the brain important for cognitive emotional processing and well-being.

Researchers at UCLA Laboratory of Neuro-Imaging compared the brains of experienced meditators with those of a control group of nonmeditators. They found that the meditators' brains contained more gray matter – the tissue responsible for high-level information processing – than those of the nonmeditators, especially in the areas associated with attention, body awareness and the ability to modulate emotional responses.

In a study published in 2010, a team of neuroscientists scanned the brains of volunteers before and after they received eight weeks of training in Mindfulness-Based Stress Reduction (MBSR), a type of meditation. The new meditators showed measurable changes in two important brain areas – growth in the hippocampus, a part of the brain involved in memory and learning, and shrinkage in the amygdala, a portion of the brain that initiates the body's response to stress.

An MRI study at Emory University showed that experienced meditators were much more efficient than a nonmeditating control group at dropping extraneous thoughts and focusing on the matter at hand when bombarded by stimuli while performing a task.

The researchers note that the simple practice of focusing attention through meditation may help patients suffering from depression, anxiety, post-traumatic stress disorder and other conditions characterized by excessive rumination.

In 2007, researchers at the University of Pennsylvania trained a group of new meditators in MBSR, then compared them with longtime meditators, and with a group of nonmeditators. After eight weeks, the new meditators improved their scores for orienting and for sustaining attention.

Next page: Can meditation treat people with ADHD? »

The veteran meditators showed greater skill at choosing what to focus on among competing stimuli than either of the other groups, and were better able to filter distractions to remain focused.

These findings suggest that meditation may be useful in treating people with ADHD, and for improving cognition and other attention-based functions that slow as we age.

Scientists at the University of Wisconsin studied the brains of participants before and after they received eight weeks of MBSR training and compared them with those of a group of nonmeditators.

At the end of the training, the subjects received flu shots and their antibody activity was tested. The meditators show elevated activity in the area of the brain associated with lowered anxiety, a decrease in negative emotions, an increase in positive ones and their immune systems produced more antibodies in response to the vaccine.

In other words, there may be a strong link among meditation, positive emotions and a healthier immune system. The potential implications of these findings for our health, mood and behavior are great.

As Dr. Richard Davidson once said, "We now know that the brain is the one organ in our body built to change in response to experience and training. It's a learning machine."

Meditation, it seems, is a good way to keep that machine in motion.

Sharon Salzberg is cofounder of the Insight Meditation Society and the author of Real Happiness: The Power of Mediation.