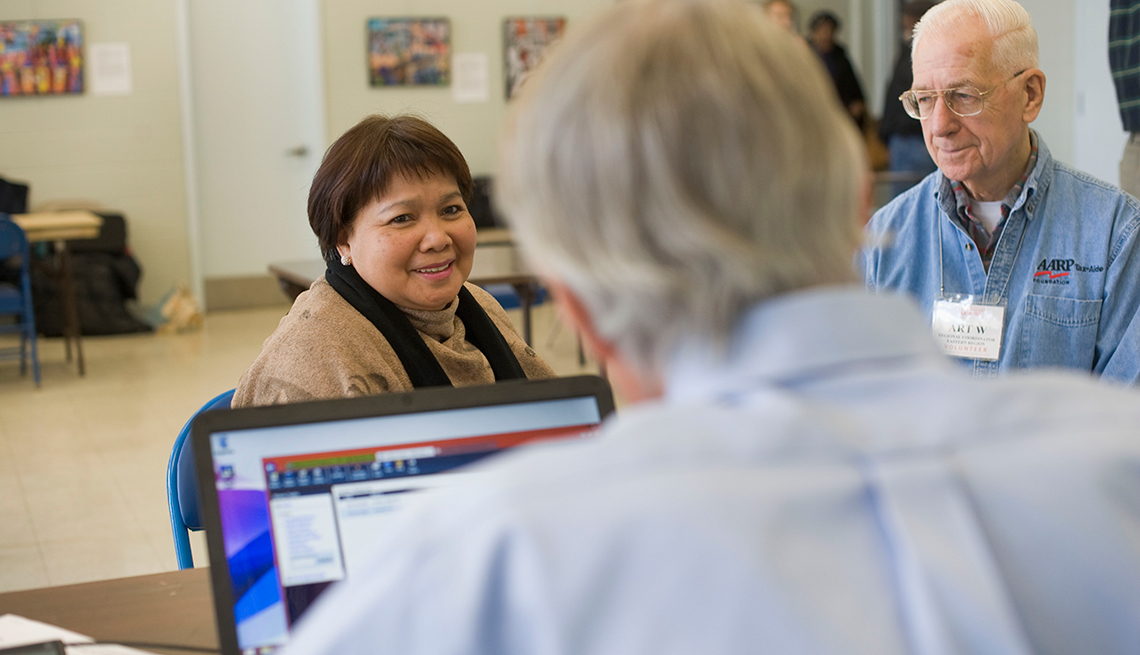 En español | Milagros Aguas used to pay someone to prepare her taxes until her employer filed for bankruptcy and she lost her job.

That's when a friend recommended AARP Foundation Tax-Aide, a program that provides free tax assistance and preparation for low- and moderate-income filers, particularly to those age 60 and up.

"It helps me a lot," says Aguas, of Washington, D.C., who recently had her taxes prepared for the second year by Tax-Aide volunteers. "It's easy. There is no charge for the service … and the volunteers are very nice and helpful."

More than 148 million returns are expected to be filed this tax season. For the first four weeks, the average refund was $3,034, or $90 more than a year ago, according to the Internal Revenue Service.

Millions over the years, though, have taken advantage of Tax-Aide. Started by a few AARP volunteers in 1968, the program has since grown to more than 35,000 trained volunteers in more than 5,000 locations nationwide. Last year, 2.6 million taxpayers used the service for their federal and state income tax returns.

One recent morning, a group of Tax-Aide volunteers at the Chevy Chase Community Center in Washington, D.C., waited for a snowstorm to subside and taxpayers to come in.

Most of the volunteers were new to the program, and each had reasons for wanting to spend 10 weeks on other people's taxes.

"It's like the ultimate sudoku," says William Slade, 67, who had been a tax preparer for H&R Block for 25 years before retiring in 2008. "There are more moving parts to the tax code than almost anything else."

That, along with dealing with each taxpayer's personal story, "makes it more fun than any other intellectual activity that you can imagine. Better than chess. Much better than bridge or cribbage."

Tamara Belden, 63, also volunteers to give her brain a workout, saying she's read that learning things gives people a mental edge. That wasn't her only goal, though.

Belden, who retired as a budget analyst with the Library of Congress and now works as a part-time tour guide, is weighing whether to become a paid tax preparer. The experience with Tax-Aide gives her the chance to see if she likes the work. She does so far and enjoys the interaction with taxpayers.

Recently, Belden prepared a return for a 30-something couple who were overjoyed to learn they were getting federal and local refunds totaling $1,500.

"You would have thought I was the fairy godmother," she says.

"It was rigorous. It was like taking a crash college course," says Susan Phillips, a 65-year-old retired teacher. "It was challenging, which I liked."

Training leads to IRS certification. Even experienced volunteers undergo annual training to keep them up to date on the tax code.

Volunteers can spot overlooked tax breaks, though they say that regular Tax-Aide clients often are quick to point out deductions.

"Our clients keep us on our toes," says Dick Riegel, 72, a retired Air Force pilot and coordinator of the Chevy Chase site.

Tax-Aide doesn't handle complicated returns, such as those dealing with royalties or farm income. And though the program focuses on helping older taxpayers, it's open to all ages.

"On a single day four years ago, my first client was 18 years old, filing his first return, and my second client was 102," Riegel says.

Volunteers commit to four hours a week for the duration of tax season.

"Many people do much more than that," says Dorothy Howe, the assistant national director of AARP Foundation Tax-Aide.

Volunteers will prepare returns through April 15, although taxpayers are advised to get in now to avoid the rush before the tax deadline. Some locations require appointments. To find a location near you and its hours, go to aarp.org/findtaxhelp.

The typical length of service is seven years, although some have been with the program for more than 30 years, Howe says.

Still, the program loses 10 percent to 20 percent of its volunteers each year through attrition and must replace them.

Ideal candidates enjoy working with numbers, are comfortable with computers and are not afraid to ask for help, volunteers say. They also must be discreet, patient, easygoing and good listeners.

"You do have times where a taxpayer gets anxious because he or she thinks they owe a lot," Riegel says. "And we get spouses who are newly widowed, so we have to help them through that first period."

Slade recalls an 80-year-old taxpayer who had always done his own return until this year, when his taxes suddenly got complicated. The man had inherited money from an annuity and distributed the cash to others as the deceased had wanted, although this triggered an income tax for him, Slade says.

Slade was able to walk the man through the situation, and as it turns out, the tax bite was much less than feared.

Brandy Bauer, communications manager for economic security with the National Council on Aging, says her group refers people to Tax-Aide.

"AARP is a very trusted [organization] for a lot of older adults, my mom included," says Bauer, whose 72-year-old mother uses Tax-Aide.

"It works for her. She does it every year," Bauer says.