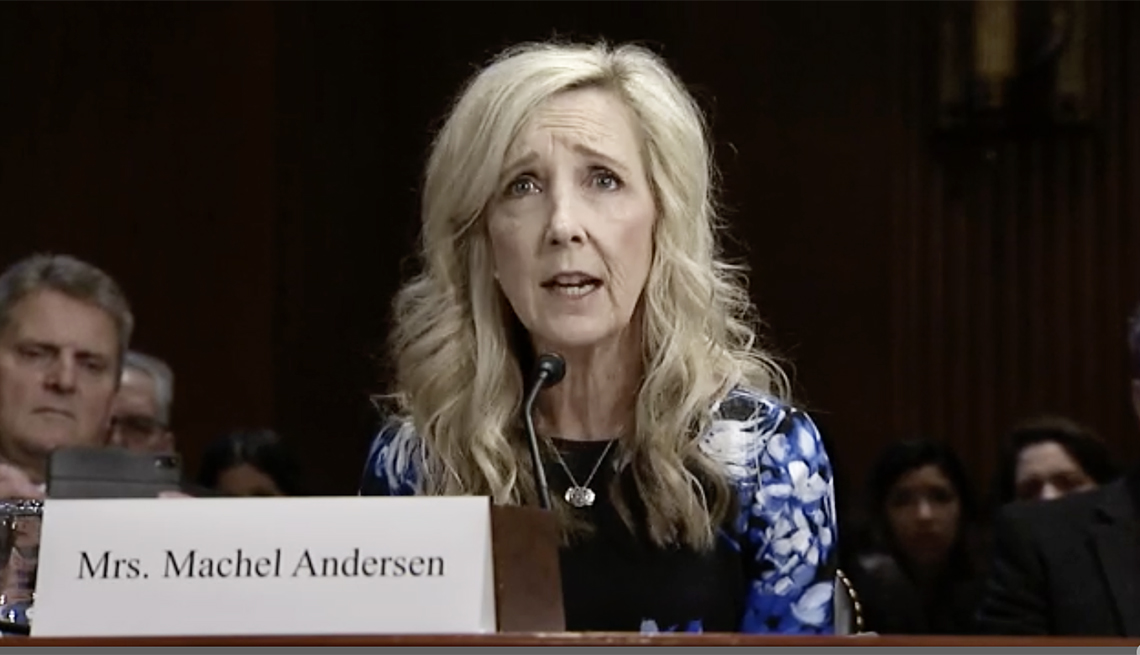 Machel Andersen, who fell victim to a Social Security impostor scam, testifies at a Senate Aging Committee hearing in January.

En español | Breaking the news to her husband, Machel Andersen wept. “I've done the worst thing in the world — I've ruined us,” she blurted out.

"You had an affair?” he asked.

Andersen, a 56-year-old Utah woman, had kept her vows, but she was lied to and betrayed by two ruthless crooks. In transactions over eight days before last Christmas, she gave away $154,646, the couple's life savings.

The scam to which she fell victim came to a halt after the criminals increased their demands, telling her to mortgage the couple's home in North Ogden, Utah. She told them the residence was paid for and she couldn't take out a loan against it without involving her husband, whom the scammers had told her not to involve. Next they said to come up with $200,000 or she'd lose the residence.

Are you being defrauded?

Andersen called a friend, who asked her if she was being defrauded. She said no, but began searching online and the truth emerged: She'd been told a series of lies to paper over grand larceny.

The lost money — sent in wire transfers to the Bank of China in Hong Kong — was everything she and her husband had in their checking account, savings account and certificates of deposit, plus funds from an investment account.

Asked if there was any chance of recovering their losses, her husband, Utah State Rep. Kyle Andersen, said: “Absolutely zero."

Last Dec. 6, when the two impostors wrapped their tentacles around Machel Andersen, she was busy and distracted. The couple's daughter had had surgery so she stepped in to care for three grandchildren, the youngest a 7-month-old boy.

Then, on her cellphone, Andersen heard three automated messages saying her Social Security number had been “compromised."

When she returned the calls, a man identified himself as an official at the Social Security Administration's watchdog agency, its Office of Inspector General. He used the name of an actual official, and gave what he purported was his badge number.

Pretext: a drug cartel and a bloody crime scene

He said a car registered in Andersen's name was found at a bloody crime scene in Texas near the Mexican border and a drug cartel in Mexico had used her Social Security number to set up several bank accounts.

He then passed her on to someone claiming to be a member of the Drug Enforcement Agency (DEA). That man used the name of someone who is a DEA official.

The lies kept coming: Her family was in danger; the cartel and the U.S. government were watching her every move; her financial accounts were going to be seized as part of the DEA's investigation. In order to protect the money, she was told, it had to be transferred to a “safe offshore account.”

She was told she would get the money back, eventually, but if she didn't cooperate, she would be suspected of working with the cartel and arrested.

"I went through the whole week pretending like everything was OK, trying to protect" my family.

For days she complied, lugging her infant grandson into financial institutions to gather the money and following the criminal's order to stay on speakerphone (which she kept in her purse) and send receipts.

When a bank clerk asked Andersen why she was sending so much money overseas, she responded as she had been coached to, saying she was buying electronics.

Looking back, she wishes bank clerks had asked more questions to stop the six-figure scam. So does her husband.

Kyle Andersen, 63, is working on legislation to require financial institutions in Utah to prominently display scam warnings, bolster fraud training for their employees and tighten the rules on international wire transfers of more than $10,000 from consumer accounts.

Speaking out, hoping to spare others Utah Representative Kyle Andersen and his wife, Machel Andersen, at his swearing-in ceremony.

In January the Andersens traveled to Washington so she could testify at a Senate Special Committee on Aging hearing on the skyrocketing number of Social Security impostor scams, which triggered more than 450,000 complaints to the agency's watchdog, or 1,230-plus per day, and led to nearly $38 million in losses during the 12 months ending last Sept. 30.

Last year the DEA issued alerts about extortion scams involving special-agent impersonators, but agency spokesman Michael D. Miller said this week the DEA does not track the number of such cases.

Talking about the crimes, Kyle Andersen told AARP: “This is evil, and the way to stop evil is through legislation and all the publicity."

He says he's heard about at least 50 other scam victims since his wife fell prey. He's received support for his measure from other lawmakers and outside groups, though he surmises it will take time for the bill to pass and has decided against running for re-election in November. He plans to get a different job and rebuild the couple's losses.

The con artists left the Andersens with less than $1,000, and, according to her husband, Machel has begun work at a dentist's office.

At the door: A woman wearing antlers

Christmas 2019 had its misery, but kindness also appeared. One day the doorbell rang and Machel Andersen opened the door to a woman wearing reindeer antlers. The woman gave her a box. “Thank you. Who are you?” Andersen asked.

"I'm anonymous,” the woman replied, leaving behind the box with $500 inside.

"It was not an isolated incident,” says Kyle Anderson, recalling getting gift cards for restaurants and calls from friends promising: “We're here for you, and you and your family will lack for nothing."

When he found out about the scam, Kyle Andersen had corrected his wife when she said she had ruined them, saying, “Oh, honey, that's not the worst thing. We'll be fine. You haven't destroyed our relationship."

Machel Andersen told the Senate Aging Committee they'd worked hard to save money and hoped they could travel and do missionary work for the Church of Jesus Christ of Latter-day Saints. “Now we can't,” she said. “Instead we will need to work."

The couple, it's safe to say, now has a new mission. “Maybe hearing my story will protect someone else,” she told senators, who applauded her courage in coming forward. “Maybe my story will help stop these scammers, once and for all."

File complaints about Social Security impostors to its Office of Inspector General and to the Federal Trade Commission.

Scammers know people are catching on to their tactics and are adapting, the Consumer Financial Protection Bureau warns. 1. Threats of arrest or legal action. If you receive a threatening phone call claiming that there’s an issue with your Social Security number or benefits, it’s a scam. The Social Security Administration (SSA) will never threaten you with arrest or other legal action if you don’t immediately pay a fine or fee.

2. Emails or texts with personally identifiable information. If there’s a legitimate problem with your Social Security number or record, the agency will mail a letter to you.

3. Misspellings and grammar mistakes. If a scammer emails with falsified letters or reports appearing to be from the SSA, or from its Office of Inspector General, look closely. The correspondence may use government jargon or official-looking letterhead, but often has spelling and grammar errors.

4. Requests for payment by gift card, prepaid card, cash or wire transfer. If you do need to submit payments to Social Security, the agency will mail you a letter with payment instructions and options.

5. Offers to increase benefits for a fee. Social Security will never promise to increase your benefits, or offer other help, for a fee.