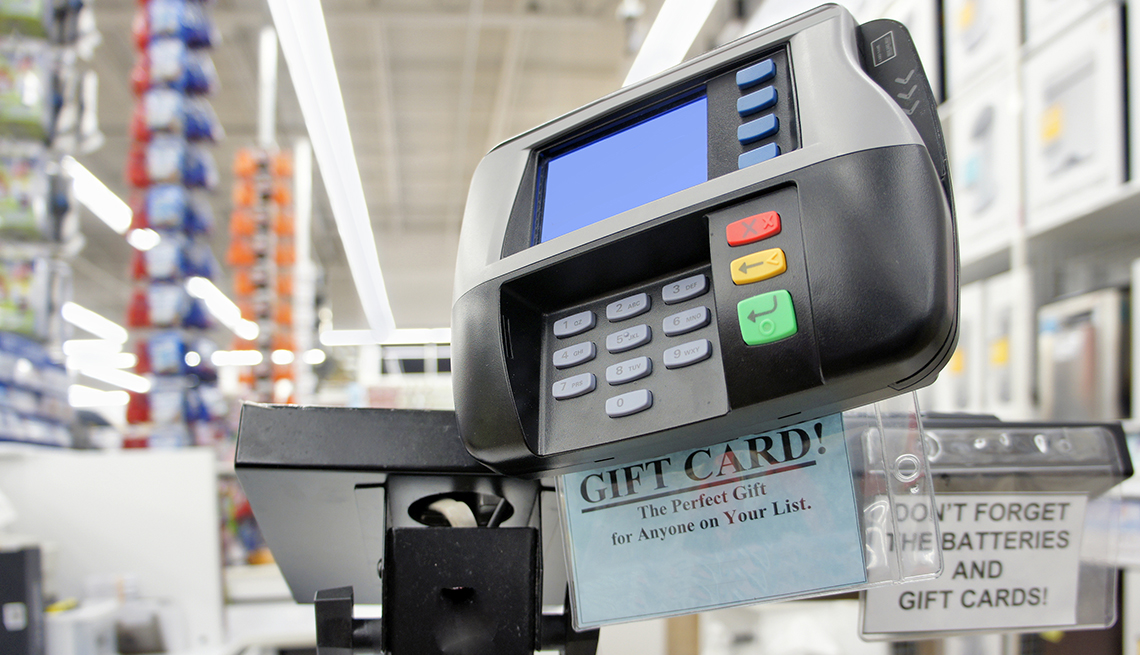 As stores buzzed with holiday traffic last month, John, a 75-year-old man in Arkansas, dropped $35,000 on gift cards in three days. The retired professional shopped six retailers in all — Lowe's, Walmart, Sephora, Best Buy, Sam's Club and Target — where he bought 70 gift cards, worth $500 each.

And he lost every dime.

The fraudsters who orchestrated John's spending spree Dec. 10-12 fed him a string of lies and kept him on his cellphone to coach him every step of the way on what to say and do. At times his credit cards were declined, and his blood pressure soared “out the roof."

"I'm sure if they were talking to somebody with a bad heart, they would have died,” John says. “It was very stressful."

He talked to AARP to prevent others from falling prey to a scheme that officials say often goes unreported — and is on the rise. John spoke on condition that his last name and the place he lives not be published.

Day 1: An alert, an alarm and a litany of lies

John was online the morning of Dec. 10 to check out a steak-and-seafood restaurant, planning to take out his wife of 53 years. The couple had been given a gift card — an irony not lost on him — and it was the last day to redeem it.

A pop-up alert, supposedly from Microsoft, warned that his computer had been hacked. Simultaneously, an alarm blared and wouldn't stop.

"Instead of just turning the computer off,” John says, he called the phone number on the pop-up on his computer screen. The man who answered, purporting to be from Microsoft, told John his email had been hacked and his JPMorgan Chase & Co. Visa card compromised.

"I'm in a panic, obviously,” remembers John, who complied with the fraudster's request for the phone number on the back of his Chase card.

Next the fraudster made a three-way call, ostensibly for help from Chase. Sure enough, Chase's phone number showed up on John's caller ID. During this call a second fraudster said the card had been used for a $8,000 donation to an orphanage in South Korea and a $7,000 charge in Dubai.

Both fraudsters had South Asian accents, and John surmises they were from India.

They told John there was a way to stop the charges from being processed and shield the card from further misuse. To do that, he would have to max out the card to its $25,000 limit by buying gift cards worth that much.

"I thought it was a crazy way to do it,” says John, an Army veteran who worked in military intelligence in Vietnam. But the crooks were persuasive and seemed legit since they knew the recent credit-card purchases John and his wife had made and the couple's Social Security numbers.

The bad actors promised that a replacement credit card was on its way. Then they cautioned the overseas charges could be the work of a fraudster inside Chase. For that reason, they told John, if any of his gift-card purchases were questioned by the card issuer, he should not reveal he was buying gift cards but say he was buying “Christmas presents."

John's first stop was Sephora, the cosmetics retailer, where he bought 10 gift cards for $500 each. He told the clerk he was buying Christmas gifts “for ladies in my family.” She “never batted an eye,” he recalls, over the $5,000 purchase.

John bought more gift cards after Sephora, driving from store to store until late at night. But even as the fateful day finally drew to a close, John's nightmare was far from over. “Get some rest,” one fraudster advised. “We'll start again in the morning."

Day 2: The other shoe drops

The next day, Dec. 11, he hit more stores until reaching the $25,000 limit on his Chase Visa. The fraudsters weren't sated. They then bamboozled him into thinking there were phony charges on his Discover card. “So here we go again. Same song,” says John, who resumed his quest for gift cards, believing he was protecting this second credit card from abuse.

He says his Discover limit was $15,000, and the issuer declined some of his transactions but allowed him to continue to spend after he told Discover the purchases were his.

John was back at Sephora on Dec.12, trying to buy five or six more gift cards in what he still believed was a race to protect his credit, when his Discover card, again, was declined. Though he'd only spent $10,000, the issuer was temporarily shutting the card down and, John says, “that was the end of this whole ordeal."

In all, he bought 35 gift cards from Lowe's, 15 at Walmart, 10 at Sephora, four each at Best Buy and Sam's Club, and two at Target. (The Lowe's purchases were Target cards; the others were redeemable at the store chains where they were bought.)

The crooks never sent John the promised replacement credit cards, nor the $350 gas card one claimed would compensate for his mileage, and only then did he realize he'd been “soaked."

John had followed the criminals’ directions to relay by phone all the gift card numbers and PINs. And fraudsters quickly redeemed many of the cards at Walmarts in Louisiana, Mississippi, Texas and Virginia, according to the police detective handling the ongoing investigation. (So as not to disclose where John lives, the detective and his agency are not being identified.)

"It amazes me every time people send money to people they don't know through gift cards,” the detective says. Victims think they can get their money back, but it's gone.

In such cases crooks favor self-checkout stations to avoid scrutiny, he says. 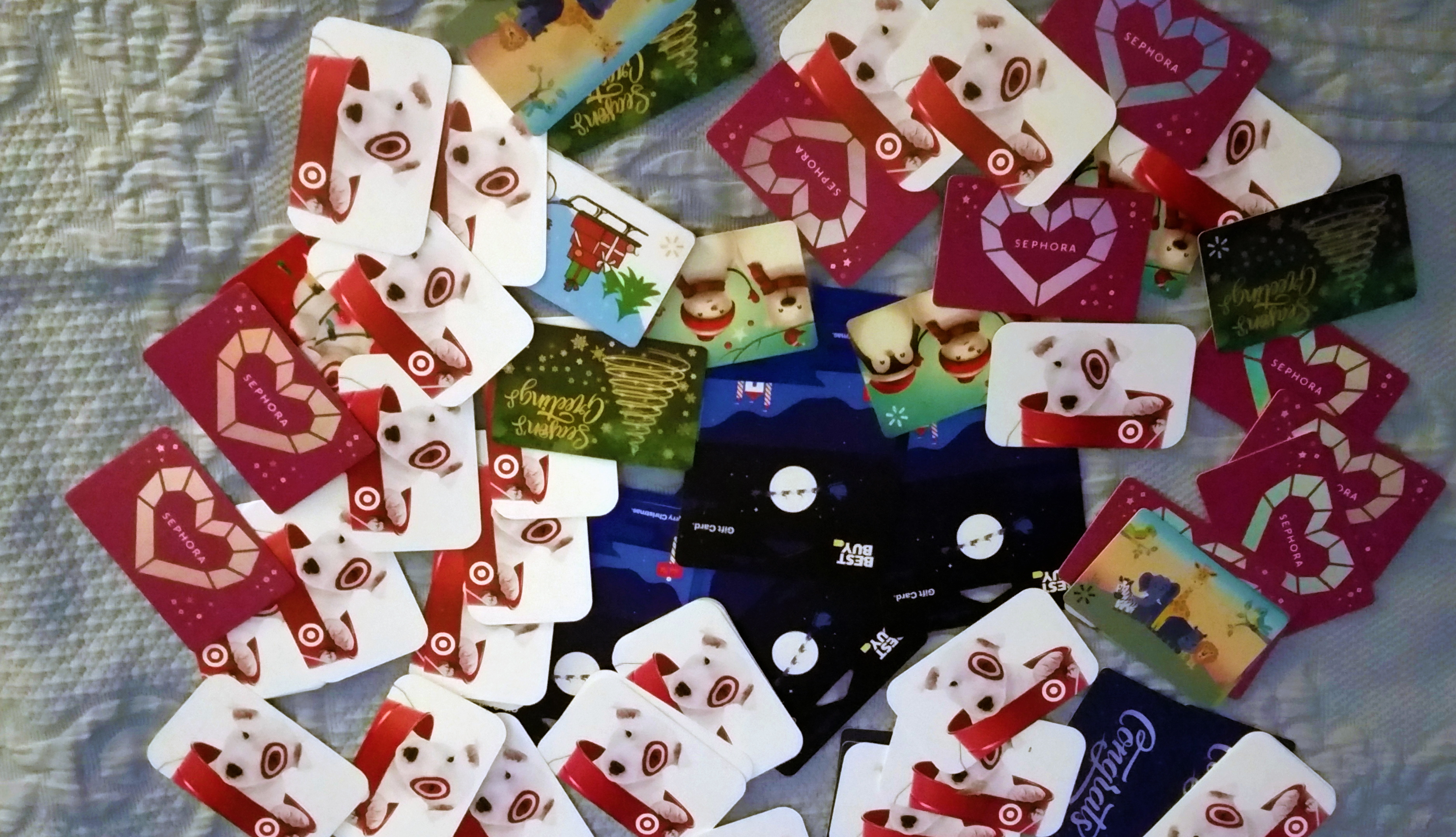 Photo Courtesy of the Victim

These are the gift cards John purchased. They’re worthless, since he gave away their numbers and PINS to fraudsters.

At the Secret Service, Special Agent Chris McMahon blames ruthless criminals for the uptick in such cases. They are from organized criminal enterprises — as small as 15 to 20 people and as large as several hundred — with specialized units that launder gift cards, set up bank accounts, handle IT and recruit new personnel, he says.

McMahon urges people to verify what they're being told, to not share sensitive data, and if they are victims of fraud, to alert authorities. “Report, report, report — as soon as possible,” he says. “That allows law enforcement to take action as quick as possible."

The detective in Arkansas, who has probed dozens of these cases, recalls a woman in her 80s who “basically wiped out her life savings” buying gift cards worth $60,000.

AARP's Nofziger urges people to buy gift cards only for family and friends — not strangers. She recommends ignoring pop-ups and unsolicited phone calls and if confronted with a suspicious request, “Stop. Get out of the situation. Get off the phone and get a second opinion."

John says he had had both credit cards he used for decades and always paid his balances in full and on time.

Told about John's case, Chase spokesman Greg Hassell called it an “unfortunate situation” but said the retiree is “responsible for the charges and the purchases."

"Our system flagged these transactions and we reached out to” him, Hassell said. “On four separate calls, [John] confirmed to us that he had made the purchases."

"It is heartbreaking when scam artists prey on anyone, especially the elderly,” said Jon Drummond, a Discover spokesman. He said its systems recognize unusual card-use patterns, which result in transactions being blocked as in cases such as John's.

Discover's customer service agents are trained to recognize red flags and follow procedures including verifying account holders’ identities and warning them “about potential scams within their own credit card purchases,” Drummond said.

"Cooperation from card members is key,” he added. “We are certainly sympathetic to victims … and we work hard on prevention efforts through our agent interactions and consumer education."

According to John, another Discover representative told him last week that “what I did with the gift cards after I purchased them was totally up to me."

John says his years working for a big corporation taught him that firms may tout customer service, but it is “all about the almighty dollar.”

And gift cards are big business. Cards with an estimated value of $95.7 billion were sold in retail stores in the U.S. in 2018, says Mercator Advisory Group, a research and advisory firm in Marlborough, Massachusetts.

Many hands get a cut: the gift card broker who brings merchants onto the racks; the stores that sell gift cards; and the establishments where they are cashed in.

Meantime, in the criminal underworld, the cards can spell p-a-y-d-a-y.

As for John's $35,000 loss, it's money he'd earmarked for a granddaughter's and grandson's college education.

"Lesson learned,” he says. “And shame on me if it happens again."

After John, a 75-year-old Arkansan, lost $35,000 worth of gift cards to criminals, here's what the retailers who sold him the cards said:

In an effort to prevent scams, in 2018 the electronics giant lowered the maximum value of its individual gift cards to $500, down from $2,000.

Talking about John's case, spokeswoman Boua Xiong said: “We hate seeing scams like this happen, which is why we've taken steps to warn our customers about these scams.”

The chain posts signs in stores, trains workers and last year put out a public-service announcement with AARP and the National Association of Attorneys General.

"Preventing these terrible scams will take all of us being aware,” Xiong said. “Customers should never provide their gift card and PIN number to anyone they don't know because once those numbers are gone, so is your money, like in this case."

Scams are “constantly evolving,” she added, and if anyone asks for payment with a gift card “it's fraud.”

The Federal Trade Commission has alerted consumers about gift card scams that have been “rising in frequency especially across retail,” a spokeswoman for the cosmetics chain said.

"Sephora encourages all of our clients to contact their financial institution and file a police report, as well as file a complaint with the FTC, if they believe they were the victim of a scam,” she said.

"We are aware of the prevalence of scams like these,” said spokeswoman Danielle Schumann.

Among its tools are store signage and online tips.

"The big one,” he said, “is ongoing technology changes aimed at reducing customer exposure to scams. We continue to implement measures designed to help guard against various consumer fraud scams."