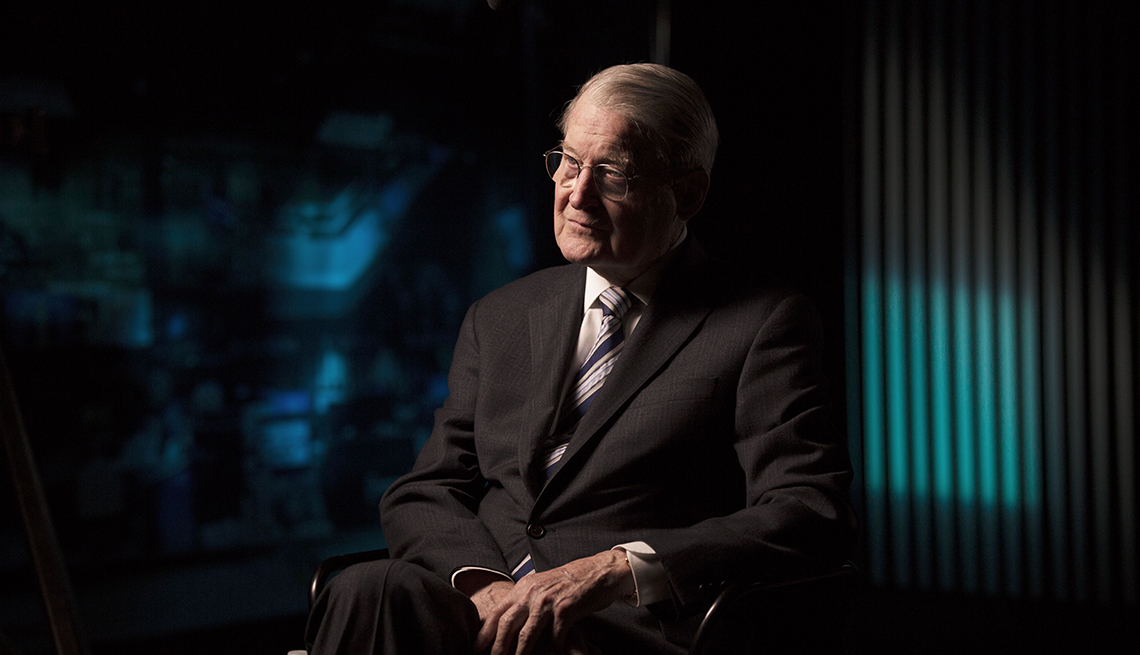 William Webster, shown in a 2014 interview, was a federal judge before leading the FBI and then the CIA.

En español | William Webster, 94, who once was director of the Federal Bureau of Investigation, burst back into the news this week when details emerged of his cloak-and-dagger assistance to a younger cadre of agents probing an international crime case.

But Webster, who also served as director of the Central Intelligence Agency, wasn’t just offering professional advice from an armchair. He and his wife, Lynda Clugston Webster, were the targets of a Jamaican lottery scam. In this type of fraud, the victims receive an unsolicited phone call saying they have won a lottery or sweepstakes but need to pay money to claim the jackpot. It’s a scam that frequently targets older Americans, according to law enforcement professionals.

“It was quite an experience,” says Webster, who after years in elite government jobs, including federal judgeships, the FBI post and leading the CIA, is well versed in the playbook that scammers rely on to defraud older Americans.

Scammers, he says, “start off promising things and it turns into demanding things, rather than providing things they said they were going to produce, and when they get into that mode, the scammers tend to get tough, and that’s a frightening experience.”

For instance, the scammer told Lynda Webster she would die from a sniper’s bullet if the couple didn’t cough up thousands of dollars to collect what was described as $72 million in prize money.

“Hey listen, it is so easy killing you,” the scammer told her, which he then went on to describe in even more graphic, frightening language.

Listen as a Jamaican scammer tells William Webster, the former director of the FBI and CIA, that he has won $72 million and a Mercedes-Benz in a lottery. Unbeknownst to the scammer, the FBI arranged for the call to be taped.

Audio from U.S. Attorney's Office for the District of Columbia

It was a violent threat coming within one of the alarmingly frequent Jamaican lottery and sweepstakes scams. Overall, 142,974 people of all ages in 2017 reported being victims of frauds involving various prizes, sweepstakes and lotteries, with losses totaling $94.8 million, according to the Federal Trade Commission. The agency does not break down the number of cases arising from Jamaica.

The problem there is so widespread that the website of the U.S. Embassy in Kingston warns that it receives “frequent” inquiries from people defrauded for hundreds or thousands of dollars by scammers in Jamaica.

“If it sounds too good to be true, it is not true,” the warning states. “Do NOT believe that you have won a lottery you never entered.”

The perpetrator who tried to bilk the Websters back in 2014 was Keniel Thomas, 29, who lived in the vicinity of Montego Bay and was arrested late in 2017 when he arrived at New York's Kennedy International Airport. He pleaded guilty in 2018.

Thomas was just sentenced in federal court in Washington, D.C., where the Websters live, to nearly six years in prison for trying to extort them.

“I will forever recall the day he threatened that blood from my head would stain our white brick house,” Lynda Webster told the sentencing judge. Even though the CIA took steps to “harden” the couple’s home to make it more secure, “We never feel completely safe because of the dangerous threats we received,” she added.

The scammer turns to violent threats after William and Lynda Webster refuse his demands. Call edited to remove profanity.

Audio from U.S. Attorney's Office for the District of Columbia

Thomas also swindled a handful of Californians ages 52 to 82, according to court documents.

His extortion attempt was caught on secretly recorded conversations with the Websters.

Using an alias, Thomas first called William Webster and promised, in addition to $72 million in Mega Millions lottery winnings, a new Mercedes-Benz with a year’s worth of car insurance. But first, Thomas wanted $50,000 from the Websters — fast. He then urged them to send some of the money, but the couple never sent any.

Webster, a retired partner with the Milbank, Tweed, Hadley & McCloy law firm, says he and wife are speaking out now because “I see how terribly troubling these cases can be. People are not used to being threatened; they’re not used to being extorted.”

According to an FBI agent who probed the case, the cooperation of the former bureau director and his wife led agents to others Thomas victimized — people who sent Thomas and his relatives hundreds of thousands of dollars.

FBI agent John Gardner says he’s been probing Jamaican lottery and sweepstakes scammers since about 2011. He estimates he’s encountered at least 100 victims in the U.S.

“I get complaints all the time,” says Gardner, who says sophisticated crooks operating in organized cybercrime gangs are to blame.

They home in on Americans age 60 and older after buying “lead lists” with hundreds if not thousands of targets, he says. The lists contain names, dates of birth, Social Security numbers and details on marital status and homeownership, he says.

Gardner, who also probes securities, mail and wire fraud cases, says the bad actors behind Jamaican lottery and sweepstakes frauds focus on people who are lonely. He said he thinks that as many as 95 percent are unmarried; some are widows or widowers. “Very rarely do I see a married couple fall victim to a scam,” he says.

Think you or a loved one is being scammed? Call AARP's Fraud Watch Network Helpline

Ex-FBI chief was a target in the past

Lynda Webster, 63, tells AARP that before Thomas crept into the couple’s life, her husband had been targeted in other scams — twice. Once, she says, it was a grandparent scam, in which a “guy holds his nose and says, ‘I’m your grandson and got punched in the face and robbed. Can you send us money?’”

One of her husband’s coworkers stopped that attempt in its tracks, asking Webster if he’d talked to his daughter, the grandson’s mother, Lynda Webster says.

Another time her husband got a bogus email purportedly from a friend attacked in Spain, she says. “I think he was asking for five hundred bucks,” the wife says.

Her husband even went to Western Union to wire money, but a clerk cautioned against it, she says.

“This older generation, I call them the trusting generation,” says Lynda Webster, founder and chairman of the Webster Group, a global event-planning firm. Even brilliant people can have a lapse in judgment, she adds, urging people to check in on their parents and grandparents.

Gardner, the FBI agent, says Jamaican scammers go to great lengths to cover their tracks, using dummy email accounts as well as phones and fax numbers that are hard to trace. “You have to peel back the onion to get to who they really are, to try to uncover the money trail and the actual identity of the caller,” he says.

Scammers are concentrated in the country’s two largest cities, Kingston and Montego Bay, but it is an “islandwide” problem, the agent says. In Jamaica, “they have rap songs that glorify this stuff,” he says. “There are middle schoolers, when asked what do they want to be when they grow up, they say ‘lottery scammers.’”

The crimes, he says, can be even more lucrative than selling drugs and guns. Many cases go unreported because victims are too embarrassed to admit they were swindled, Gardner says.

He’s also encountered victims who are so taken in by the scam that when they’ve been contacted by the FBI, they report the contact to the scammer and ask what they should tell agents. “They think I’m interfering with their prize,” he laments.

According to Gardner, though William Webster’s complaint to the bureau seemed routine at first, the case became a “great opportunity” to work with a trusted person who is familiar with how agents track down criminals. Agents knew “we would be able to I.D. other victims of this scammer based on Judge Webster’s cooperation,” Gardner says, “and we obviously did that.”

“Mrs. Webster and Judge Webster were fantastic,” he adds. “They really made the case. They really are the stars of this investigation. If we had [more] cooperators the way they were, it would make my job much easier.”

William Webster, who will be 95 in March, says the admiration from the FBI is mutual. “I’m glad we were in a position to do the little we did do,” he says.