The consumer bureau was created under the Dodd-Frank financial overhaul law (PDF) with a mission of helping citizens navigate through increasingly tricky financial waters, particularly during a recession. 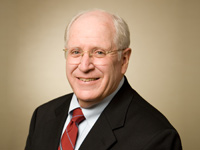 Older Americans can become vulnerable to financial fraud and abuse. Many have seen their two biggest assets — homes and long-term financial investments — severely decline in value over the past few years.

"This office presents a unique opportunity to shed light on the hidden epidemic of senior financial abuse and to help seniors in the difficult financial challenges they face," he said.

"For most seniors, our retirement savings — if we have any — and our homes are all we have. If we want to keep a good standard of living and enjoy our retirement years, we need to hang on to these assets … without worrying whether or not the nest egg will be enough."

The confirmation fight has little to do with Cordray, but is mostly over the issue of the sweeping powers the law grants to the agency. Forty-four Republican senators have signed a document saying they will stop Cordray's nomination from going forward unless changes are made in the law.

Meanwhile, Humphrey said, the work of his Office of Older Americans will go on. He said that while getting a bureau director in place would help and would give the overall organization the independence it needs, "we have a lot of work to do right now, and we can take it on at this point."

'The power of peers'

Humphrey said part of that work will involve research on scams and interviewing older people to find out what kinds of difficulties they have had in the past. He also urged those who have been scammed to speak out — loudly.

"I learned at AARP about the power of peers — we learn best from each other," said Humphrey, a former member of the AARP board of directors who resigned to take the consumer job.

"The more we speak out, the more we learn from each other," he said. "In my years as attorney general, I learned if you have tough enforcement and regulations, which are essential, you really also need well-educated folks so they can make decisions by themselves — to be able to say no when you are being pressured."

Next: Humphrey is a "stellar choice." >>

Humphrey was elected to the all-volunteer AARP board of directors in 2008. In a statement, AARP CEO Barry Rand praised Humphrey as a "stellar choice," saying "he has proven leadership skills and an extraordinary passion for serving the needs of people 50-plus."

Humphrey served four consecutive terms as Minnesota attorney general, from 1983 to 1999. He served as a Minnesota state senator from 1973 to 1983. In 1988, he ran unsuccessfully for the U.S. Senate, where his father, Hubert H. Humphrey II, served from 1949 to 1964, before becoming vice president under Lyndon Johnson.

The elder Humphrey ran unsuccessfully for president in 1968 but returned to the Senate in 1971 and served until his death in 1978.

The Dodd-Frank Wall Street Reform and Consumer Protection Act called for creating several offices to address the needs of particular sets of Americans, including people 62 or older, military veterans and the poor.

Raj Date, special adviser to the secretary of the Treasury and the consumer bureau, said Humphrey's experience makes him an excellent choice for the job.

"As baby boomers join the ranks of the retired, their hard-earned savings should help them realize opportunities, not serve as the target of deception and fraud," Date said.

"Skip's experience as a state attorney general and state senator, and his work with seniors in his home state of Minnesota as well as on the national front, make him a perfect fit to lead the Office of Older Americans," Date said.

In a statement, the Office of Older Americans outlined plans to: