After making her mortgage payment a week early, Sharon Bullington, 70, was stunned when Bank of America began foreclosing on her home. Why? Because, she was told, she made the payment too soon.

See also: Bank takes over home without a cause. 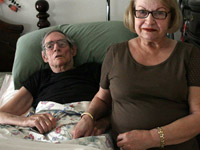 James Bullington, 78, is terminally ill and bedridden. Sharon, 70, is his sole caregiver.

In Bank of America's eyes the check was due Jan. 1, and the early check invalidated the modification. "It's like death to me," an emotional Sharon Bullington told the St. Petersburg Times. "I just don't understand why they're doing this."

Desperate, she wrote to bank CEO and President Brian T. Moynihan and was told the foreclosure couldn't be stopped. Bullington's congressman, Rep. Gus Bilirakis, R-Fla., contacted the bank on her behalf. "It is extremely frustrating to hear about cases such as these," he said. Bullington's St. Petersburg attorney, Shawn Yesner, 38, said, "I've seen some crazy stuff, but this is a first."

In August, Bank of America issued a statement admitting it "made an error posting" one of the Bullingtons' mortgage payments. It also offered the couple "a long-term affordable mortgage," and agreed to reimburse the couple for $1,800 in legal fees and waived late fees. That should resolve the matter, Yesner says.

Also of interest: An escape route from foreclosure. >>