En español | The last time Ruben Martinez paid the mortgage on the modest Staten Island, N.Y., home he shares with his wife, daughter and grandchildren, George W. Bush was beginning his second term as president in 2005. Boomers Charles and Jill Segal stopped paying their loan nearly four years ago, even though they continue to live in their five-bedroom home in Palm Beach County, Fla. 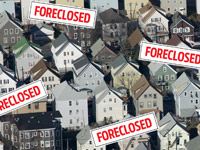 Foreclosures in some states can take years to process.

And Florida retiree Charles Light is still holding on to his three-bedroom home in the scenic Gulf Coast community of Cape Coral, as well as a five-bedroom residence in the town of Bartow. It's been almost two years since he made a mortgage payment on either one.

Your Turn: Can we fix the foreclosure mess?

With the nation's foreclosure system all but paralyzed after an avalanche of loan failures and "robo-signing" scandals, many delinquent homeowners are defying lenders and staying put. Instead of packing up and slinking away, they're living for free, sometimes for years. They're hiring lawyers to challenge their cases, and many are winning reprieves or causing the process to stall even further.

"They go into a perpetual state of limbo where nothing happens or the case goes very slowly," says Light's attorney, Mark Stopa.

The extraordinary delays are hampering hope of a housing market recovery and pushing this year's troubles into next year, says Rich Sharga, senior vice president at RealtyTrac, which tracks foreclosure data. The logjam also has kept thousands of new cases from being filed.

"The system's broken," he says.

With about 4 million loans currently in some stage of delinquency, lenders and lawyers say nonpaying owners are living in moderate to lavish communities across the country.

Often, banks are not pushing to go to foreclosure. They seem to be in no hurry to add to their swollen inventory of repossessed homes, which now stands at a near record 862,000 nationwide.

Also contributing to the gridlock is intense scrutiny by regulators stemming from the scandals in which banks cut corners and falsified documents to rush homeowners to foreclosure. Until their cases are resolved, owners can legally remain in homes they would've lost long ago in normal times.

"The [banks'] paperwork was so messed up in so many cases that it's mind-boggling," says Florida lawyer Peter Ticktin, who represents the Segals. "The delay is huge."

Americans harbor mixed feelings about their nonpaying neighbors. Some are sympathetic to their financial plight. Others see them as freeloaders who are gaming the system, an insult to the millions of working homeowners struggling to pay their mortgages on time. In Miami, Francisco Permuy and other residents of his condominium building face higher homeowner association fees to cover for nonpaying owners who continue to live in the building. "Some people are very angry," he says.

Next: Living for free will result in higher interest rates. >>

Not paying can give troubled borrowers a chance to get back on solid financial ground. "I say take advantage and save $20,000, $30,000, $40,000 or more in order to go live somewhere else, or buy a house outright," says Stopa, whose law offices are in Tampa. He says that despite homeowners' clamoring for help, many banks never provided any. Now, he says, "homeowners are doing what is in their own best interest."

Bank-imposed fees, interest and fines covering the time the home goes unpaid continue to drive up the mortgage principal.

Bankers say the cost of living for free will ultimately result in higher interest rates shouldered by people who had nothing to do with these delinquencies. "It will be factored into all mortgages so future borrowers will be paying more," says Bob Davis, executive vice president at the American Bankers Association.

Martinez, 58, says he would happily trade places with a working, paying homeowner. "I don't like how I'm living. It's embarrassing to me," says Martinez, who lost his job six years ago and fell behind on his mortgage. The bank demanded a $7,000 payment. He offered $3,500; the bank wanted the entire amount.

"What was I supposed to do? If I could strike a deal with my lender, I would," says Martinez. "People who feel it's unfair, they're entitled to their opinion, but they should make sure they have the facts before they make a judgment."

Borrowers like Martinez face serious consequences that could last for years. Bank-imposed fees, interest and fines covering the time the home goes unpaid continue to drive up the mortgage principal. Moreover, once a foreclosure goes through, banks can file suit for the balance unless there's been a negotiated settlement.

Meanwhile, the borrower's credit score nosedives, making it difficult to get future financing for a home, car or any other big-ticket item.

Your Turn: Can we fix the foreclosure mess?

Early in the housing crisis, foreclosures moved through the system relatively quickly, taking just months from the first default notice to eviction. Today, the process in some states can take three years or more.

In New York, where Martinez lives, it takes an average 858 days for banks to foreclose. At that pace, lenders would need 84 years to clear their inventory, according to Herb Blecher, a senior vice president at LPS Applied Analytics, which tracks real estate data. Homeowners in New Jersey can live "mortgage-free" for an average 728 days while banks complete the process; in Florida it's 853 days.

In the hard-hit Las Vegas area, where one in every 19 homes received a foreclosure notice this year, attorney Jacqueline McQuigg says lenders "start the foreclosure process but they don't want to finish it. That never would've happened years ago." But she and other lawyers say that lenders are better off having owners occupy the properties rather than risk the vandalism, mold and general neglect that can come with vacancy.

Light, 80, faces a similar quandary. The $6,000 he was paying for mortgages for both houses exhausted his savings. Yet he doesn't want to sell because he owes much more than the homes are worth. In March, he won the foreclosure case against one of his homes — the lender's paperwork was ruled deficient. The lender can seek foreclosure again, but the process would start all over.

"I retired comfortably in 2000 and felt I had plenty of assets to sustain me," Light says. "The real estate crash devastated me. I'm determined to stay in my house and maintain it rather than let it deteriorate like hundreds of others around here."

Your Turn: Can we fix the foreclosure mess? >>

If you've fallen behind on your mortgage, a counselor may be able to help. But stay clear of those who ask for fees upfront, or who guarantee they can stop a foreclosure or get your mortgage modified.

Here are some groups that can guide you.