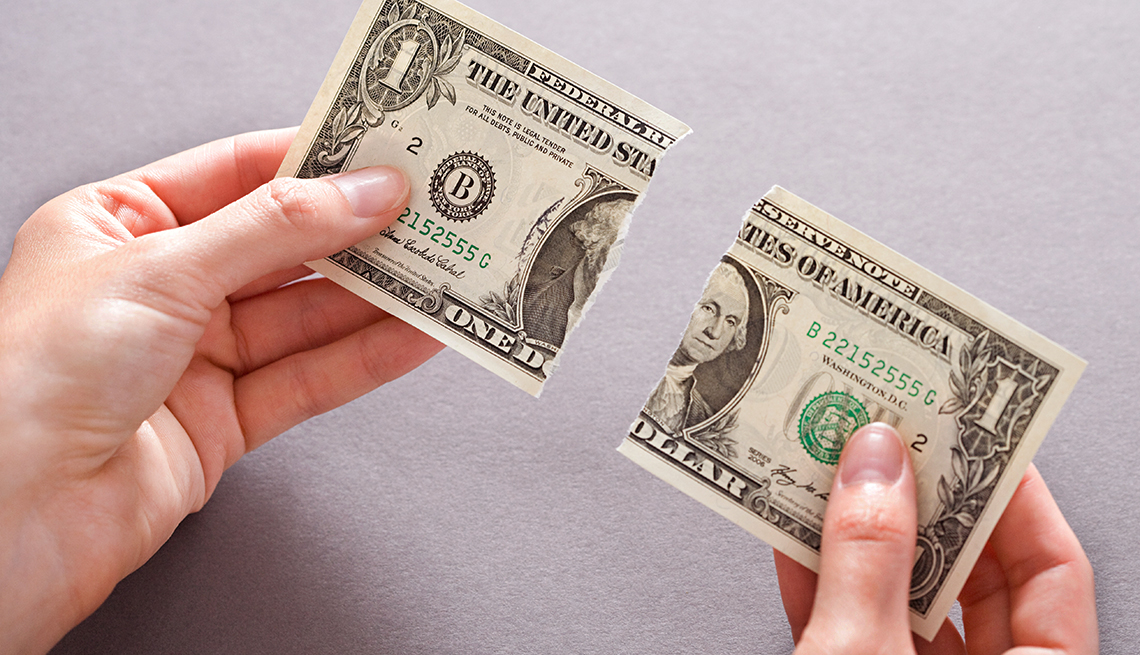 Couples that have kept their finances separate may face some tough decisions once it comes time to retire.
Getty Image
By
Shira Boss
AARP
En español
March 27, 2018

|  Many modern-day couples successfully keep their finances separate while both spouses are working and earning; it’s even been known to help keep the peace. But what happens in retirement? Can a shared lifestyle be supported by two separate nest eggs? What if one runs out?

Separate but not secret

Many couples with separate accounts have worked out how to share household expenses equitably. Beyond that, what they each do with their money is up to them. It’s this latter part of the equation that can cause problems for retirement planning, financial advisers say.

“Separate shouldn’t mean secret,” says certified financial planner Jean Marie Dillon of Asheville, N.C. She knows this situation well, not only through working with couples but because she and her husband keep their own money in separate accounts.

Dillon’s husband has children from a previous marriage; she does not. He’s retired; she’s not. They equally cover food, the mortgage, car payments and other joint expenses. They also share a bucket list. But spending differences do arise.

“Sometimes my husband has his own interests and spends money on those things,” Dillon says. For example, he is a bird-watcher who travels to faraway places. “These are expensive trips he goes on, and I have to accept that this is his money, from his separate account.” Of course, her acceptance also stems from having full knowledge of their finances, and from calculating that her husband isn't overspending. “He’s not running us into poverty,” she says. The same applies to her husband’s monetary gifts to his children and grandchildren. “He can do what he wants, but I should be free to ask the question and should expect an honest answer,” Dillon says. “And if I felt it was too much, I’m free to express that.”

To make the arrangement work into retirement, Dillon says that full disclosure plus an agreement that they would each be there for each other financially in the event of an unexpected hardship are key. “We’re comfortable supporting each other, should the need arise,” Dillon says. And among retired couples, she notes, that situation arises with regularity, typically because of medical bills. Especially for those without substantial retirement savings, or for anyone living “on a shoestring budget,” it often comes down to a simple question, Dillon says: Will you be there for me when I need you?

It also comes down to planning. Dillon tells her clients that if they don’t have enough reserves individually, including adequate insurance for something like a catastrophic medical situation, then “a deeper-dive discussion” needs to take place, one that addresses questions such as these: Will one spouse fund the gap should the need arise? Or does one spouse have enough to cover emergencies for both spouses?

If not, she says, couples may need to build up their reserves, perhaps by pulling money out of stocks to create a fully funded emergency fund or to purchase long-term care insurance or adequate disability insurance.

Ideally, couples with separate accounts should strategize their retirement savings together from the start, advisers say. IRAs and 401(k)s are individually owned, but at a minimum, retirement assets should be fully disclosed so each half of the couple knows who can afford what, and for how long.

Carol B. Amos, 61, and her husband, 73, of Wilmington, Del., got married later in life and were used to managing their own money. They still do so, after contributing to two joint accounts: one for household expenses, another for emergencies.

And while they have retirement accounts at separate financial institutions and see different financial advisers, they go to each other’s appointments. “He just had his annual review, and I was there,” Amos says. “There are no secrets. They’re separate accounts, but you need to look at the whole picture.”

Planning together means that you can adjust things if either of your situations changes — for example, when one person retires while another is still working. Maybe it doesn’t make sense to make equal contributions to the household fund at that point.

That was the case with Amos after her husband retired. If they both continued their full contributions to the household kitty, he would be taking money out of his 401(k) and paying tax on it to do so. Since she could afford to shoulder more of the household expenses while she was still earning, they decided he would scale back his contributions to their joint account so that the money in his retirement account would continue to grow tax-deferred (for their ultimate mutual benefit).

As with Dillon and her husband, the couple's understanding is that if trouble arises, all resources would be available to support the couple. Their estate planning underscores this understanding. “It all combines in the end,” Amos says. “It goes to each other first,” and then to a shared list of nonprofit recipients. (Neither has children.)

Of course, separate finances are easiest when both spouses have plenty of money to support their shared lifestyle. Things get trickier when there is a disparity. “The worst-case scenario is one spouse can live comfortably to 90, while the other will go broke,” says Kate Stalter, cofounder of and senior financial adviser at Better Money Decisions in Santa Fe, N.M. Age differences, “even of five to seven years,” can also cause complications, including possible resentment on the part of a younger spouse who may have taken breaks from the workforce earlier on to raise children.

Stalter cites the example of one of her clients, a paralegal, who was still working although her husband, ten years her senior, had retired. During one call, the woman told Stalter her husband was off at the Indy 500 that week. “It sounded like, ‘He’s off doing fun things and I’m stuck here working,’” Stalter says — not an especially healthy dynamic for a partnership. “Could all this be talked through and worked out so all are satisfied?" In her experience, yes. “These are financial decisions, but also emotional and quality-of-life issues.”

Disparity is common, she says, but not an insurmountable challenge for a married couple. “People deal with that all the time and figure out how to make it work as a household,” Stalter says. And yes, compromises on both sides sometimes have to be made.

For example, Dillon, who is self-employed and pays her own health insurance, says she and her husband might have to move for the sake of her business. “We’re reasonable. He’s retired and realizes I still have to work, so he’s flexible,” she says. “He’s willing to relocate if needed.”

And when one spouse’s resources are short, “That’s where your years of experience as a financial adviser come into play,” says Keith Moeller, an adviser at Northwestern Mutual in Minneapolis. Acting sometimes as more of a marriage counselor than a financial planner, he says, he works with the couple to figure out how to make up for shortfalls. “I’ve negotiated these conversations many times,” he says. “In 29 years, I haven’t run into a situation where there isn’t a willingness to work it out. They’re married and care enough to stay together, so there’s room for give-and-take.”