En español | Pedro Arrivillaga recalls the long lines in front of grocery stores in Chile in the early 1970s. The prices for sugar, coffee and pasta were rising two or three times a day on the black market — dollars only. "We had little idea of where prices were going," says Arrivillaga, 57, a business manager in Santiago. "Buying goods was very difficult. Saving was impossible. The inflation rate made daily living a challenge." 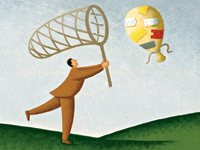 The threat of high inflation in the United States has been making headlines lately. The concern with runaway inflation started last winter with the spike in oil prices, and continued through the summer budget debates in Washington that brought the growing government debt into the spotlight. Seven in 10 pre-retirees say they're very or somewhat concerned about inflation risk, according to a survey by the Society of Actuaries.

Hispanics who lived through the upheaval in countries like Chile, Argentina, Bolivia, Peru and Uruguay might be especially fearful, though experts say that hyperinflation is highly unlikely here and that any inflation we experience should be manageable. Still, even mild inflation is worth guarding against. This holds true especially for those nearing retirement, already retired or on a fixed income, all of whom traditionally suffer most from rising prices.

The United States has never seen inflation like that of its southern neighbors, such as Bolivia, where prices increased in 1985 by 12,000 percent, according to some estimates. Although inflation in the United States peaked at 14 percent in 1980, the average over the past century has been 3.24 percent, a statistic that hasn't changed in the last few years.

So why the recent scare? "The media tend to love sensationalism," explains Cathy Pareto, a certified financial planner in Coral Gables, Florida, whose family is of both Cuban and Chilean descent. "But in truth, inflation moving forward will probably remain near its historical average of 3 to 4 percent."

Eduardo J. Ramos, head of Freedom Advisory, based in San Juan and Chicago, agrees. "There are forces at work that will create inflation, such as the rising demand for commodities. But there are also forces working in the opposite direction, such as the import of much-lower-priced goods from China and from other emerging countries." And oil? "Oil prices go up, and down, and up again —  but always with an upward-trend bias," he says.

Fortunately, if prices rise, you can protect yourself to some degree by diversifying your portfolio. Bonds, CDs and savings accounts that pay a fixed rate of return tend to fare poorly in times of high inflation, while stocks have historically done a good job of holding their own. For that reason, many experts recommend at least 15 to 20 percent in a diversified stock portfolio, even for those near or in retirement.

Also of interest: Faces of the crisis.