En español | You know you're a shopaholic if a thief steals your credit card and you get the monthly statement, only to discover that he's spending considerably less than you normally do.

OK, that's a takeoff on an old Henny Youngman joke, but for many Americans, it's apparently true. Prepare for shock and awe when considering these credit-card facts compiled by Bankrate.com:

There are roughly 1.2 billion credit cards in use in the United States. (Note: That's about four cards for every man, woman, and child in America.)

And this last stat really gives me chest pains:

I know, I know, I know. You're going to game the system and rack up airline miles or other bonus rewards by using your credit card for everything, and then pay it off every month to avoid interest charges. More power to you if you have the discipline to actually do that. 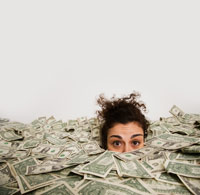 The vast majority of those who try end up failing miserably. Those "freebie rewards" are ultimately anything but free, after factoring in the hefty interest and fees they incur.

Not only are we paying a fortune in credit card interest and fees, but a number of studies have shown that we simply spend more when we pay by credit card instead of cash. One study showed that people were willing, on average, to pay 30 percent more for an item if they were charging it.

Another study showed that people who used charge cards at fast food restaurants spent about 50 percent more than those who paid with cash. That's bad for both the waistline and the wallet.

When you pay with cash, it's psychologically harder to part with actual greenbacks, so you spend less. Plus, there's the inconvenience factor. You may not have enough cash with you, which gives you a chance to change your mind about potential purchases. Or at least that's what you often hear; but we want to do a little experiment of our own.

Try for one week to give up use of your charge cards and debit cards (other than to get cash from an ATM), and pay for everything with cold, hard cash.

Did you spend less, and, if so, how much and on what types of things? Were you ever tempted to break out your charge cards, or ever caught short on cash?

Good luck, and remember: Show us the money!

Jeff Yeager is the author of the book "The Ultimate Cheapskate's Road Map to True Riches." His Web site is www.UltimateCheapskate.com.