En español | What are you worried about? For many of us, it's money: 7 out of 10 middle-class boomers fear they won't have enough cash to last through retirement, according to a Bankers Life and Casualty Company survey. As a financial journalist, I've seen the world of money grow more complex. We're now more responsible for our financial lives: Decisions about health care, parents, kids, and 401(k)s sit squarely on our shoulders. We desperately need simplicity — a way to answer our biggest money questions: about making it, saving it, spending it, and investing it. A means of examining our money decisions and being able to say: Yes. Or no. That simplicity is possible. 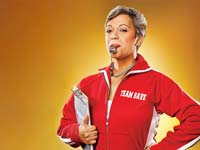 Shape up your finances.

I've come up with a set of Money Rules that I follow religiously. Financial advisers, analysts, bankers, accountants, and smart people in non ­ financial professions have their own rules. I've pulled nearly 100 of my favorites into my new book, Money Rules: The Simple Path to Lifelong Security. To start you off, here are five rules you should follow right now.

You can take two behavior-altering messages from this maxim. The first and more straightforward is that because it's so hard to sell things at a profit, be thoughtful when buying stuff you expect to sell someday. Take cars, for example. The average new vehicle depreciates about 45 percent in the first three years, according to Consumer Reports. If you plan on selling the car in a few years, buy one that holds its value. The second takeaway? The best buyers are skeptical ones, particularly with investments. "If you find it easier to buy and harder to sell, it's probably because you're investing with emotion instead of analysis," says Tim Maurer, coauthor of The Ultimate Financial Plan. "It's easy to fall in love with a story, and most companies have a compelling one. That makes the decision to buy easy — even when things are overvalued." As a result, you may find it hard to let go and sell. If you are the kind of investor who falls prey to your emotions, buy mutual funds, says Maurer. They have less of a story.

Rule 2: Pay your bills as they arrive

Several years ago I worked with polling firm RoperASW on a money-and-happiness survey. We found that people who instantly paid their bills were happier and had a better grip on their finances. They had about a third less credit card debt and were stashing away savings.

Here's why: Paying bills fast gives you room to maneuver. If you get — and deal with — a sky-high heating bill, you can immediately cut back on discretionary items and avoid running low on cash at the end of the month. It takes five minutes a day, says Alicia Rockmore, CEO of the organizational company Buttoned Up. "Sit down with the mail, look at it, get rid of the junk, look at your bills, get online (see Rule 5), and in two minutes pay those bills and be done. It's simpler, easier, and leads to fewer mistakes than doing bills all at once."

Rule 3: Don't use an ATM in a place without an easy exit

This is about saving, not safety. On your next cruise, bring cash, because the transaction fees on shipboard ATMs are downright piratical: On Carnival Cruise boats, for example, Bank Atlantic of Fort Lauderdale (which operates the machines) charges $6 per transaction. On Royal Caribbean, it's up to $5.50. "Anywhere that you are, in effect, a captive audience, they're going to make you pay," says Richard Barrington, senior financial analyst with MoneyRates.com. "That's airports, sporting venues, arenas, concerts, and tourist areas."

Even in routine locations, using other banks' ATMs costs you. Bankrate.com says the average fee is now $2.33. "Plan how you're going to access cash," Barrington says. "Decide how much you're going to need, then go to your own bank and get it." And if your bank is consistently inconvenient? Consider switching banks.

A recent Charles Schwab survey showed that 44 percent of investors plan to invest more in exchange-traded funds, or ETFs, over the next 12 months. Then the study asked investors to assess their understanding of ETFs. Forty-six percent called themselves "novices"; a quarter admitted they "don't know anything" about how to best use ETFs. I don't have any problem with ETFs, which are a relatively recent investment vehicle — similar to a mutual fund — that tracks the performance of a market sector and is traded like a stock. They are typically low-cost investments offering relatively easy diversification. But you shouldn't put money into even a simple investment that you don't understand. "If someone is pitching you an investment that sounds good on the surface — say, it pays you 6 percent a year — ask how it works," says Maurer. "If you open up the cover, what are you going to see?"

This is true for other products, too. Shopping for a new treadmill, I listened as a salesman tried to persuade me to pay $800 for features I wasn't sure I'd ever use. A personal trainer had more impartial advice: Lace up my running shoes and do a trial run in that showroom. I did — and bought a cheaper machine.

Yes, it saves time (nearly two hours a month, according to Javelin Strategy & Research) and money (about $60 a year in stamps if you pay 12 bills a month). But banking online also makes you smarter, because it puts you in control: You don't need to drive to the bank or pick up the phone for info on your accounts. "Or stand by your mailbox and wait," says Mark Schwanhausser, senior analyst with Javelin. "That's not control. That's being passive." Web banking lets you monitor your spending, tweak your budget, schedule payments, and more, particularly if you marry your online bank with the personal-finance management tools available online. (For more on online money tools, see "Does Your Plan Add Up?" on page 29.)

Online banking also makes you safer. Javelin's research found that people who bank online look at their money four times as often as those who bank the old-fashioned way. That helps you catch unauthorized withdrawals. "You can see every transaction within seconds," says Schwanhausser. "That's much different from reviewing statements at the end of each month."

And how: On average, in 2010 it took 13 days to detect fraud if you monitored accounts electronically, 49 days if you reviewed paper statements. "Fraud is one of those cases where the old truism applies," Schwanhausser says. "Time is money."

Jean Chatzky is the financial editor for NBC's Today. With additional reporting by Arielle O'Shea.

Also of interest: Buy this, not that