For a person with diminished or no vision or hearing, the first steps to a livable community are literally safe steps. Being able to securely navigate sidewalks, cross streets and ride public transportation are keys to independence and mobility. Public spaces that take the varied needs of visitors into account empower and encourage all sorts of people to get out and about.

Following are some tools and technologies communities can use to help meet the needs of people of all ages and abilities. (When you're done checking out the helpful solutions, below, learn about some of the Old and New Challenges for People with Vision and Hearing Impairments.)

The city of Charlotte, N.C., used humor in an ad campaign telling residents to remove obstructions from the sidewalk so pedestrians can safely navigate the city.

Whether someone is vision-impaired, signing as they talk, pushing a stroller or running, it's tough to weave through an obstacle course of trash cans and sidewalk debris.

In Charlotte, North Carolina, a humorous ad campaign launched in 2013 educated residents about the hazards of leaving trash cans in the sidewalk, says Terry Bradley, Charlotte's communications manager and Americans with Disabilities Act (ADA) coordinator. The city works with utilities to make sure new poles aren't placed in the middle of the sidewalk. In addition, the city known for its tree-lined streets has moved away from planting trees in the sidewalk, says Bradley: "We took a unified approach, showing how when you assist any one group, it helps everyone." 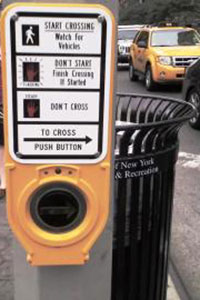 Pedestrian crosswalk signals that talk and vibrate take the guesswork out of crossing the street and are a big step up from the signals that rely on chirps and cuckoos to indicate when a street is safe to cross.

An accessible pedestrian signal (APS) provides information in audible tones, verbal messages and/or vibrating surfaces so a pedestrian with vision loss can not only know that the "Walk" signal is on for crossing an intersection, but exactly which direction is safe.

For instance, when a pedestrian pushes the "Walk" button, a voice will come on and, for example, say in New York City, "Now waiting to cross Broadway at West 23rd Street." When the "Walk" sign illuminates, the button vibrates and a directional arrow lines up with the crosswalk so a visually impaired person can safely step forward. Charlotte, San Antonio and Kansas City, Missouri, are among the many cities installing these types of crosswalk signals.

"It makes such a difference in so many people's lives," says Neva Fairchild, an independent living and employment specialist for the American Foundation for the Blind. 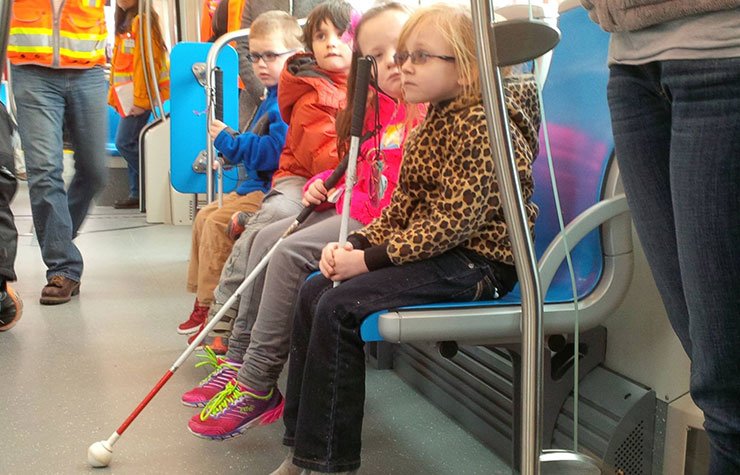 Photo courtesy the Children's Center for the Visually Impaired and the city of Kansas City, Missouri

In May 2016 students with vision impairment got to test-drive Kansas City's new streetcar system.

Kansas City, Missouri, debuted its new streetcar system in May. Before the official opening kindergarteners from the Children's Center for the Visually Impaired got a preview test ride to see how easy the system is to navigate.

The KC Streetcar offers level boarding at all of its stops, so it's friendly for wheelchairs, bicycles, baby strollers and anything with wheels. Kiosks at stops are within ADA reach ranges and have push buttons for contacting a live customer service person. A headphone jack next to the button enables users to have a quieter, more private conversation. Touchscreens on the kiosks scroll with the light brush of a finger. 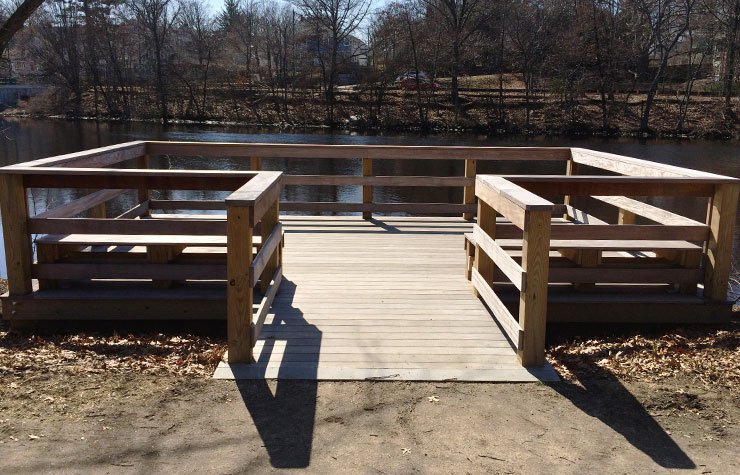 An overlook near the Braille Trail provides an opportunity to experience the Charles River by fishing or listening to the water flow.

The quarter-mile Braille Trail in Watertown, Massachusetts, enables people with impaired vision to walk along the Charles River without any help. (That means no companion, guide dog or cane needed.) Instead, a guide wire with different kinds of beads distributed along it indicates the presence nearby of features such as signage and benches.

The guided walk has 10 interpretative displays that are written in both visual words and Braille. A sensory garden contains stone walls that people can climb on and two boats where people can sit. A musical marimba-style bench allows visitors to strike wooden slats to play music. An overlook provides an opportunity to experience the Charles River by fishing or listening to the water flow.

The trail, which is located just two blocks from the Perkins School for the Blind, is part of the Watertown Riverfront Park and involved planning with Perkins, the Massachusetts Department of Conservation and Recreation and local groups.

"It’s really liberating for someone who is blind to have the opportunity, without holding a dog or a cane, to be in nature one-on-one," says Kim Charlson, director of the Braille and Talking Books Library at Perkins. To further inclusion and counter the marginalization of people who are blind, the Perkins School hosts a website for the sighted called BlindNewWorld. 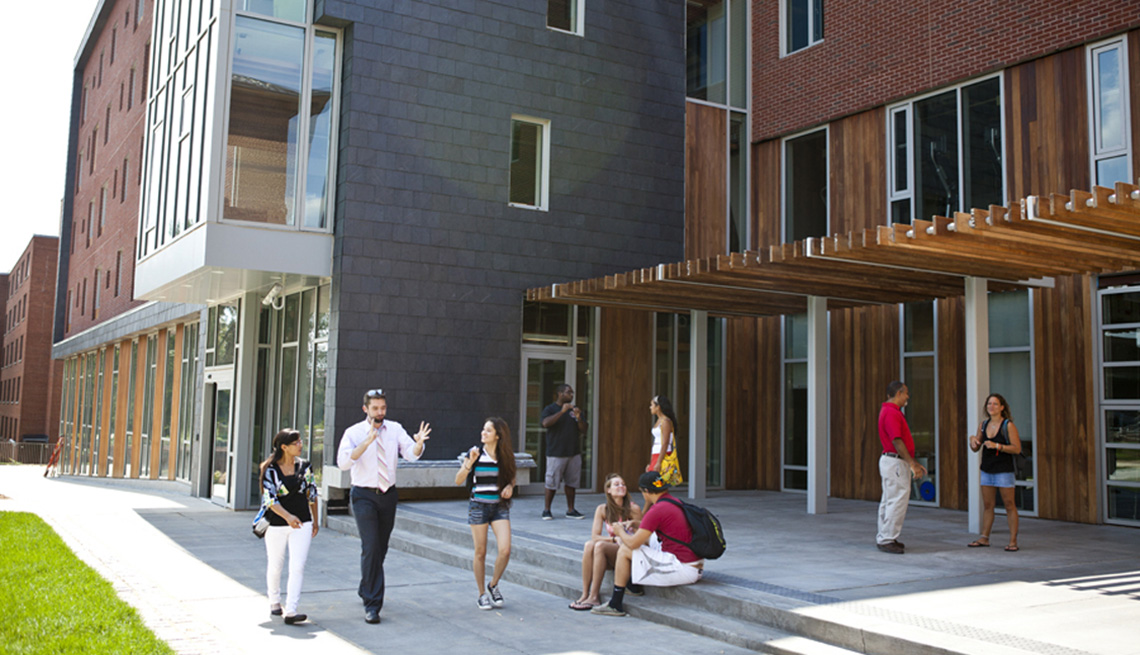 Wider sidewalks, such as this one at Gallaudet University, the world's only university designed specifically for students who are deaf, are more useful and safer for people of all ages and abilities.

For people who are deaf or hard of hearing, the ideal sidewalk is nine or 10 feet wide, which is three times wider than the three-foot sidewalks built 50 years ago, says Hansel Bauman, architect and executive director of campus design and construction at the Washington, D.C.-based Gallaudet University, which is the world's only university designed to be barrier-free for students who are deaf.

That extra width, which exceeds the guidelines in the Americans with Disabilities Act, gives people more room to speak in sign language and watch one another as they walk together, Bauman says. 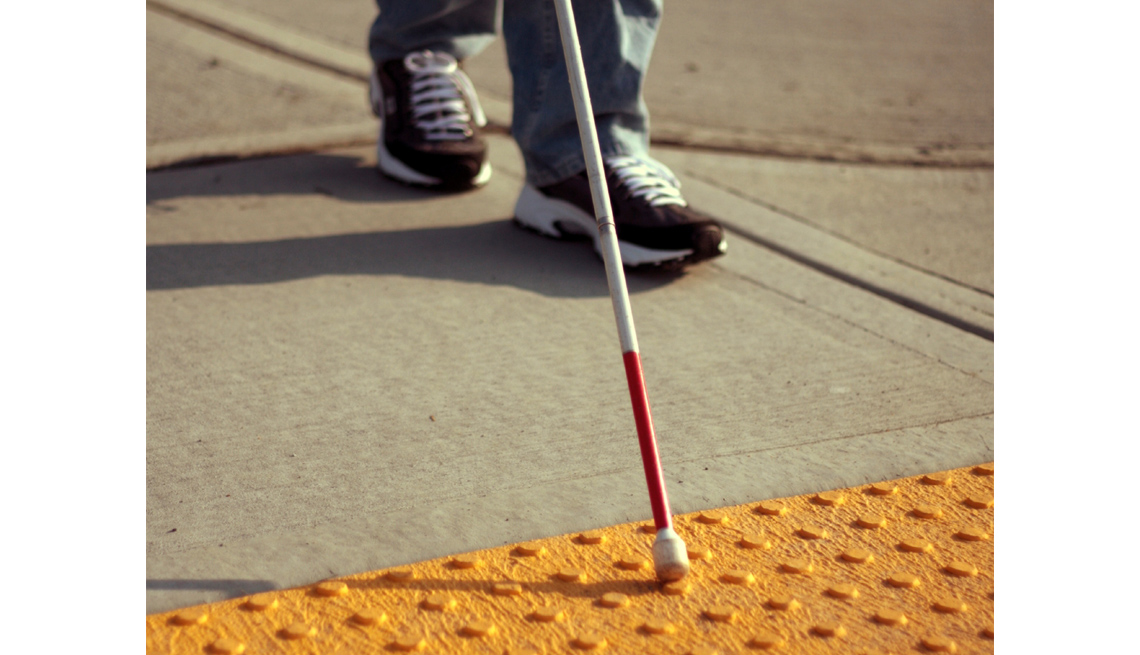 Detectable warnings, also called "truncated domes" or "tactile paving," are used on sidewalks to signal that the next steps will be into the street.

Good Bumps in The Road

Detectable warnings, also called "truncated domes" or "tactile paving," are tiled, bumpy squares that are placed before the edge of the sidewalk to signal that the next steps will be into the street.

Detectable warnings are a standard under Public Rights of Way Guidelines and will likely become the ADA standard in the future, says Meg Conger, ADA compliance manager in Kansas City, Missouri.

"It's important for someone with sight impairment to know when they're leaving the sidewalk or right of way and are about to step into traffic," Conger says.

The bumpy pavement warning is also helpful to people who are speaking in sign language as they walk, says Gallaudet's Hansel Bauman: "People can sense they're getting close to the edge of the sidewalk without having to look away from their conversation." 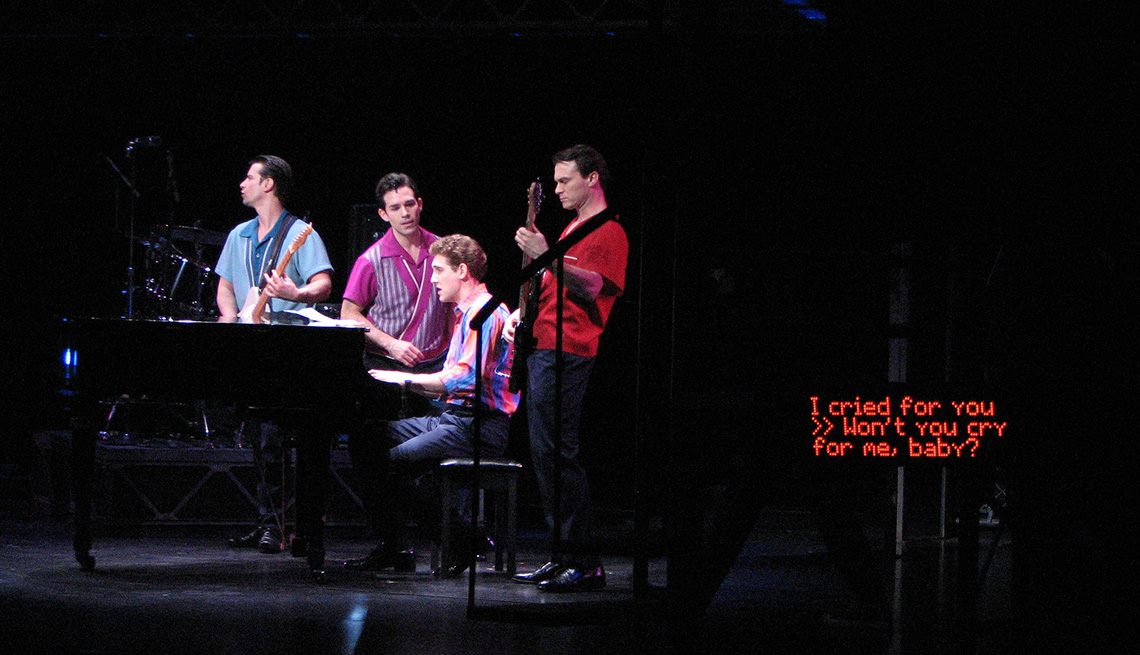 The musical "Jersey Boys" featured a simultaneously open-captioned and signed performance on Broadway.

Theatre Access NYC is breaking through the sound and sight barrier to enable people with vision and hearing loss or impairments to enjoy shows on Broadway, says David LeShay, director of marketing and public relations at Theatre Development Fund.

Karen Haywood Queen is a freelance writer and former Associated Press (AP) reporter whose articles have appeared in AARP Bulletin, The Washington Post, The Los Angeles Times and other publications. 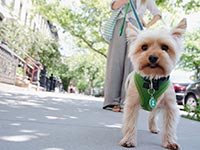