An undated view of the skyline of the city of Portland, Oregon, with Mt. Hood in the distance. Over the next two decades, both the number and the proportion of older adults living in the Portland metropolitan area are projected to increase at greater rates than in the entire state of Oregon or the U.S. as a whole.

Over the next two decades, both the number and the proportion of older adults living in the Portland metropolitan area are projected to increase at greater rates than in the entire state of Oregon or the U.S. as a whole. Portland is also expected to experience an increase in diversity among its aging residents. 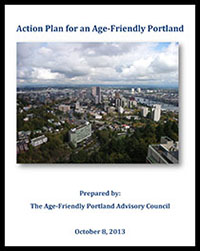 In 2006, the Institute on Aging at Portland State University began collaborating with the World Health Organization’s Global Age-Friendly Cities project. At the time Portland was the only U.S. city (among 33 cities in 22 countries) selected for research in the WHO study.

The following 10 domains of action, derived from the original eight domains of age friendliness as identified by the World Health Organization, are detailed in the Portland action plan.

Specific action items — from as few as two to as many as five — are identified for each domain, as are potential partners for implementation.

The Age-Friendly Portland Advisory Council points out that the work in each domain recognizes the value of intergenerational linkages, safety and security concerns and the potential development of new technologies. Yet, although the plan seeks to be inclusive of the many interested organizations and individuals in the Portland community, it stresses the importance of Portland’s older adult population being actively involved in setting priorities and making decisions. Inspired by the WHO age-friendly cities initiative, the Portland plan abides by the philosophy of “nothing about them without them.”

The Age-Friendly Portland Advisory Council’s action plan is an advocacy tool for Portland and a model for other cities. The plan pulls together in an organized, easy-to-follow document strategies the city’s varying stakeholders can use to move the community toward creating and enhancing the physical, social and service environments that benefit residents of all ages and abilities.

“For reasons of practicality and usability, the Action Plan is not comprehensive,” the authors write. “Rather, it is hoped that the action items suggested will lead organizations and individuals young, old, and in between to work together to implement not only these items but others as well that will contribute to creating a community that truly is a place for all ages.”