Four years ago, Michael Shindler's home was a sleeping bag under a pine tree in a park in Pittsfield, Mass. Today, the 54-year-old Air Force veteran, recovering alcoholic and mentor to at-risk kids lives just up the street, but worlds away in his own gleaming apartment. He also owns a share of the complex and has a voice in how the place is run. 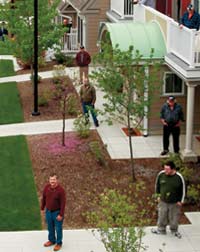 Once homeless, these veterans now own homes in their own Pittsfield, Mass., community.

His permanent digs are part of a newly constructed, think-outside-the-box center for homeless vets — the Gordon H. Mansfield Veterans Community. Opened in January, this groundbreaking approach to housing is helping end homelessness for American veterans.

Shindler and 38 other former military men, average age 54, live in brand-new solar-paneled, attached units in a development that looks far more like high-end than affordable housing. Their monthly rent, which ranges from $580 to $682, is subsidized in part by a joint program of the U.S. Department of Housing and Urban Development and Department of Veterans Affairs that is designed to help find housing for homeless vets. They pay the rest of their rent with earned income, their Social Security and veterans disability benefits, or other veteran housing funds. They must also pay $2,500 to buy a limited-equity ownership in the development.

If the down payment proves too steep, local banks may lend them the money interest-free or give outright donations to Soldier On, the nonprofit that created this community and works with federal, state and local agencies to provide shelter, support and job training for homeless vets.

The $6.1 million project, built with federal, state and private foundation grants, is debt-free. Each vet receives his share of any rent money left over after the center pays for insurance, maintenance and reserves for repairs. This year, each vet will pay around $7,000 in rent and get back around $2,100. If a stakeholder decides to move or dies, Soldier On will buy back his share for $2,500.

"It's a great project," says Pete Dougherty, director of homeless veterans programs for the Department of Veteran Affairs. "It's the only one with equity shares, and their board of directors includes veterans who determine their own needs, rather than have others tell them what to do."

Already a successful model, the community is being replicated in other places. A new project for 60 homes to be built on the campus of the VA Medical Center in Northampton, Mass., just received federal funding. A similar project in Agawam, Mass., has land to build. Soldier On was recently funded for a similar project for female vets and their children, and has two more sites in mind in Massachusetts. Dougherty expects the model to expand nationwide.

Next: From homeless veteran to a homeowner. >>

"Think about it. We've taken people from being homeless to homeownership," says Jack Downing, president of Soldier On. "These men and women who have served have lost everything, so to be able to reestablish their dignity and purpose and give them a place that is theirs allows them a great sense of belonging."

Sam Bennett, 52, knows this well. The former Army tank gunner has been homeless four times since he was honorably discharged in 1981. He became a prison guard, then served time in prison for robbery, was a drug addict, and for six years lost contact with his four daughters and their mother.

But now he has a studio apartment in the Mansfield Community, furnished like most others with donated items: "It's not a room, it's not a shelter. It's a wonderful feeling to say, 'This is mine.' When I come home, I can throw off my shoes and pick them up later or decorate any way I want. I feel normal."

Bennett is also a certified substance abuse counselor, and earns $40,000 a year as a case manager for Soldier On "helping people just like me who have the same issues I had" at the nonprofit's transitional shelter and treatment program. He lived there for a month while receiving treatment for drug and alcohol abuse. It also happens to be on the same property, just across a driveway, from Bennett's new apartment. His relationship with his family now? "Beautiful!" he says.

According to Downing, one-fifth of all homeless Americans today are veterans, many of whom lack support because they have burned their bridges with relatives. Here's why: Of the nearly 550 vets that Soldier On helps annually with emergency, transitional and permanent housing, 88 percent have substance abuse issues, and 84 percent have mental health issues.

Downing recalls that when he started at Soldier On 10 years ago, not one of the vets had any family visit them at Christmas. "It was stunning," he says. "I've worked in prisons and rehabilitation centers my entire life, and never has there been a community that not only has lost so much but has been so marginalized by everyone."

After Alan Nash came back from the Vietnam War, the now-60-year-old started drinking and "didn't know how to get help. People were calling vets terrible things and spitting at us. I felt rejected," he says. He lived in his car in Connecticut, going from campground to campground, until the car died one day. In 2003, Nash entered a veterans program for substance abuse, then wound up at Soldier On's transitional shelter before snagging his one-bedroom apartment. He loves cooking for himself, and "waited for so long to have my independence back," he says. "This is my home. It's permanent!"

At Soldier On, Nash can also get medical, mental health and job-training services. Therapists and other professionals frequently come right to the vets' apartments or the transitional shelter building next door. A local bank sponsors one-on-one money management sessions. When residents need to go for outside help or a job interview, a ride is available.

Since just 17 percent of the residents have driver's licenses, "we deliver all the services they need where they live," says Downing. "They keep their appointments and have continuity in their treatment."

The vets say the support they get from one another, not to mention staff, helps them battle their demons, too. "We all care about each other," says Nash. John Woodman, 93, wearing penny loafers and jeans, agrees. "We are all people who have had a hard time in life and are like a band of brothers who have a natural affection for each other. We've seen things nobody should see." A widower with a "Proud to Be an American" blanket on his bed, Woodman served in the Army during World War II and has a daughter who lives nearby. "As far as I'm concerned, this place is magic! It's rehabilitating people who badly need it and giving them a springboard for a new life. There is freedom here and, at the same time, there is discipline."

Residents are held accountable for their actions, but if they don't toe the line, there is collective soul-searching rather than finger-pointing. If they skip their rent payment, for instance, the board of directors and staff will work with them to find ways to catch up and be punctual in the future. That might mean meeting with the local bank to work on their budget or come up with a payment plan or having fellow vets remind them why rent money gets paid before a flat-screen TV purchase. One thing the board doesn't plan on doing is evicting them.

It's a similar philosophy if a vet has an alcohol or drug relapse. Rather than play tough guy and threaten punishment or throw them out, as some programs do, "we say, 'What haven't we done to build a relationship of trust with you?' " says Downing. "We don't see them as failures, but rather take responsibility for their failure. We'll do whatever it takes to make them successful."

Next: Vets run several businesses with support from Soldier On. >>

The Gordon H. Mansfield vets also run and own several businesses. A construction crew of six goes out into the community every day, and other entrepreneurial opportunities include greenhouse, vending machine and plastic assembly businesses. Technical assistance comes from Soldier On.

The group is having an impact on those outside their small military community. Shindler, who once slept in the park down the road, now talks to students at the local high school about the three things he knows best: alcoholism, homelessness and the military. "Some of the kids are on the fence," he says. "They want to hear from someone who has been there." Students from another school join the vets for dinner every Friday to learn about their hard-knock lives — in the hope that they'll be discouraged from following suit. The superintendent of the Pittsfield schools has presented Shindler with a certificate of appreciation for working with students.

Shindler, who sits on the community's board of directors, is also appreciative of Soldier On. "Without this program," he says, "I would have continued self-medicating. If you told me when I was living in the park in 2006 that I'd be here today, and with a place of my own, I wouldn't have believed it. I never, ever thought I would be afforded this opportunity."

Sally Abrahms writes on aging and boomers and has published in Time, Newsweek and the New York Times. Her website is boomerwriter.com.