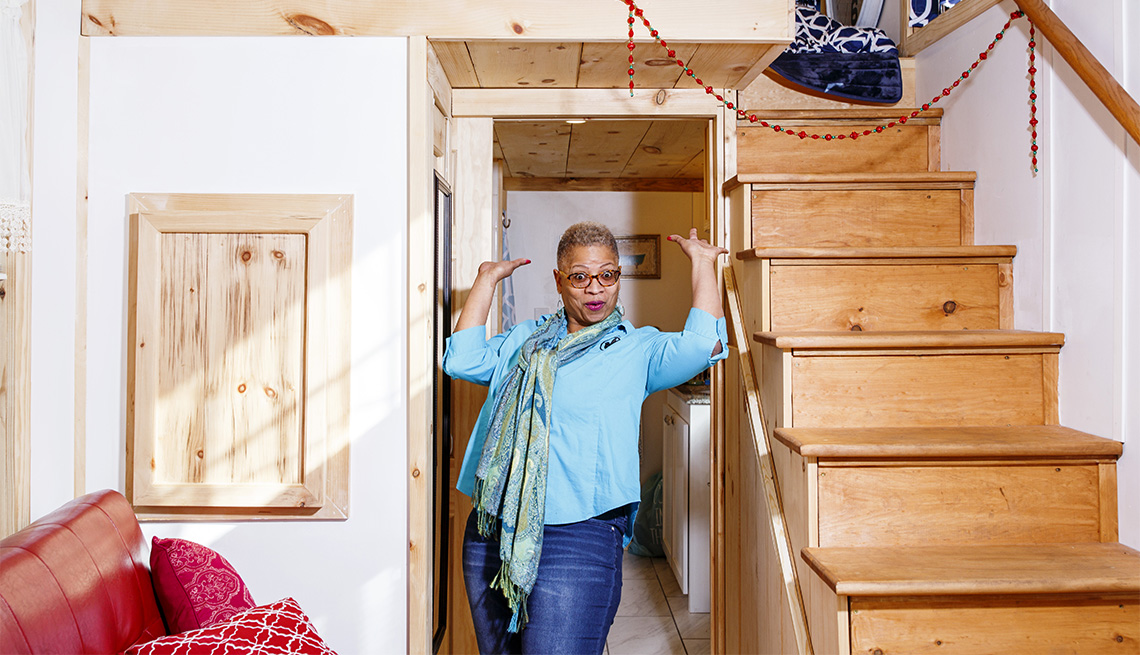 Nikitia Moore shows off her home during the Georgia Tiny House Festival at the Atlanta Motor Speedway in Hampton, Ga. on March 4.

Nikitia Moore loves to have strangers walk through her home.

It’s all part of the role she’s taken on as an advocate for tiny houses. It’s one thing, she says, to tell people what it’s like to live in one; it’s another to show them.

“People come in, they see me there, and they see I’m living there and they say, ‘I can do this,’ " she said, laughing.

That’s why Moore, who lives in Danville, Ga., travels to tiny house events when she can. She wants people to have the same feeling she did when she walked through one for the first time — that it was not just a conceivable retirement option, but one that could make her happy.

She particularly remembers being struck by one with a stand-alone bathtub, something usually associated with more luxurious accommodations. That made her realize that she wouldn’t have to lead such a spartan existence.

Moore, 61, has been living alone in her tiny house since last fall — yes, it has a tub — and says she’s never felt confined. The high ceilings have helped. So have the windows that bring in so much light.

She admits that she had to get rid of a lot of possessions. A Salvation Army truck hauled those away. But like many who have made the transition to the tiny house lifestyle, the process made her appreciate that most of her material things just weren’t that important to her.

It also forced her to take a hard look at some of her habits. “I was a bit of a shopaholic,” she said. “But you figure out pretty quickly that you can’t do that anymore. You can’t start accumulating stuff. It will just end up being in your way. Now I save more money because I’m not out buying stuff. And I don’t have to spend my time looking for the latest this and the latest that.”

Moore says that has allowed her to focus on projects she enjoys. For instance, she likes to make soap and lipstick. It’s an avocation she hopes she can turn into a small business once she retires. She concedes that she needs to keep bins for her supplies under the house, and if she does travel, she’ll probably have to put that in storage.

But Moore is adamant that she hasn’t had any second thoughts about going tiny. “People sometimes look at you weird when you tell them you live in a tiny house. But I haven’t regretted anything about it,” she said. “I’ve made mistakes on things in my life. I’ve made some bad decisions. This was not a bad decision.” 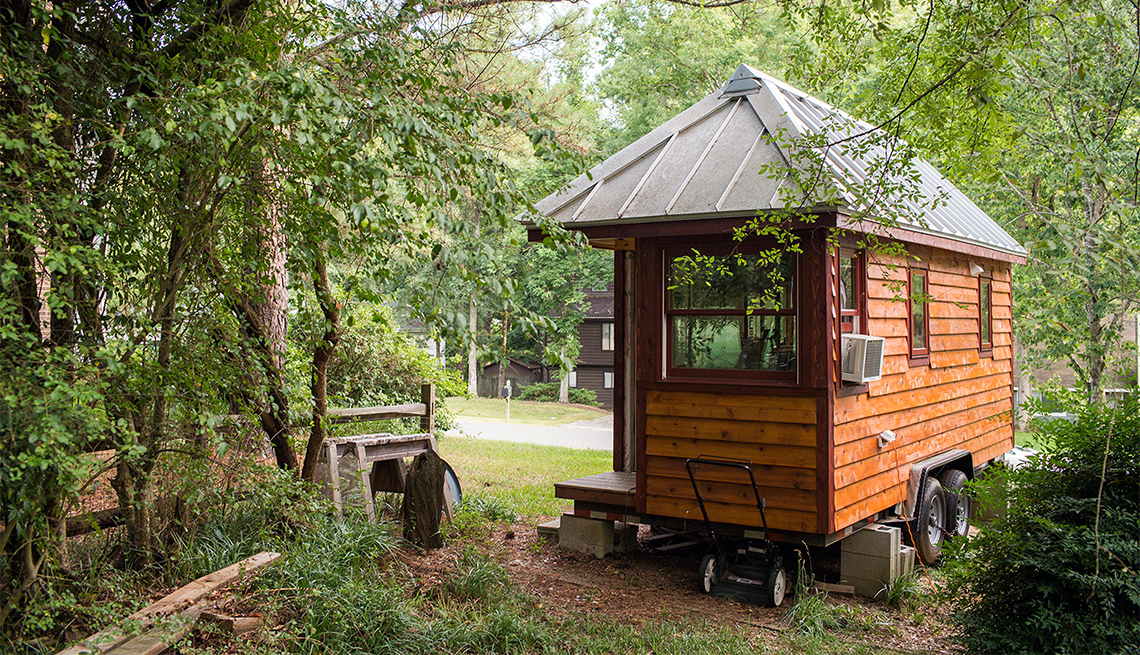 Don't judge a book by its cover. People living in tiny homes say there are misprescriptions about what life is like once you walk inside.

For Peggy Collier and Terry Campbell, the journey into tiny living began as it often does — as viewers of tiny house programs on HGTV.

Peggy jumped on board first. In the fall of 2015, she told her husband, Terry, that she thought they could live in a few hundred square feet of space. He wasn’t so sure. But he became more interested when Peggy proposed a deal. If they switched to a tiny house, Terry, who paints portraits and landscapes, could build his own little studio nearby.

To see if the two of them — plus their fivesmall dogs — could actually live together in such a small space, they marked off 399 square feet of their town house in Plano, Texas, and agreed to confine themselves to that area. For two weeks, they lived inside the lines they had drawn out in tape. It was enough to have them believe they were ready to make the move.

But there were other hurdles to clear. Peggy found a parcel of land about 40 miles north of Dallas, in the small town of McKinney, Texas, but the developer had never heard of tiny houses. And he wasn’t too keen on having one in his development. But Peggy persisted, and eventually he relented — although he told them they had to choose from just two of the 42 lots he was selling.

Next they had to convince local officials to allow them to circumvent an ordinance requiring any home to be at least 1,100 square feet. The back-and-forth went on for six weeks, until finally they were granted a variance. The couple ordered a home from a builder, and when it arrived in early March of 2016, they became the first tiny house owners in McKinney.

Both say the change has not been so hard, particularly after they had managed to live in such a small a space during their two-week experiment with their dogs in the town house. In fact, the move to a tiny house was a step up for the dogs. Outside was an acre and a half of land, compared with the 10-by-10-foot yard at their old place.

There have been some adjustments, though. They no longer have a bathtub and get by with just a shower. Because the refrigerator and the bathroom door open into the same hallway, things can get a little crowded in the mornings. And their closets have shrunk from 6 feet wide to 27 inches.

Meanwhile, Terry, who’s 55, had always been a collector — of old toys, for example. “But I realized I had stuff in storage for three years, and I thought if I haven’t looked at something in three years, why do I even still have it?” he said.

Before they moved, they had a two-day garage sale and raised almost $1,500. The only furniture they took with them was their bed and a chair. Everything else in their tiny home was new.

But Peggy, 57, thinks it’s critical that the smaller space truly feels like home. “You need to make sure that your tiny house has everything you want,” she said. “Maybe it’s your favorite piece of furniture. If you have a big old recliner that’s your favorite chair, and you get in the tiny house and realize you don’t have that chair anymore, you might start to resent it. You don’t want something that’s going to make you go, ‘I wish I’d never done this.’ ”

Both Peggy and Terry say the close quarters haven’t strained their relationship, which is that much more impressive considering the amount of time they spend together. They both work the same shift at Walmart and drive to and from the store together. They say they spend more time outside now than they did before in their townhouse, particularly since they have a garden at their new place.

Not to mention that Terry has his promised 16-by-20-foot studio.

They’ve also, without really intending to, become tiny house ambassadors. They’re used to having people stop and stare at their home and then inviting them to take a look inside.

An uncle of theirs also lives in a tiny house now. Peggy’s younger brother is building one, too.

“We broke the ice here,” she said. “Now, two lots down there’s another tiny house." 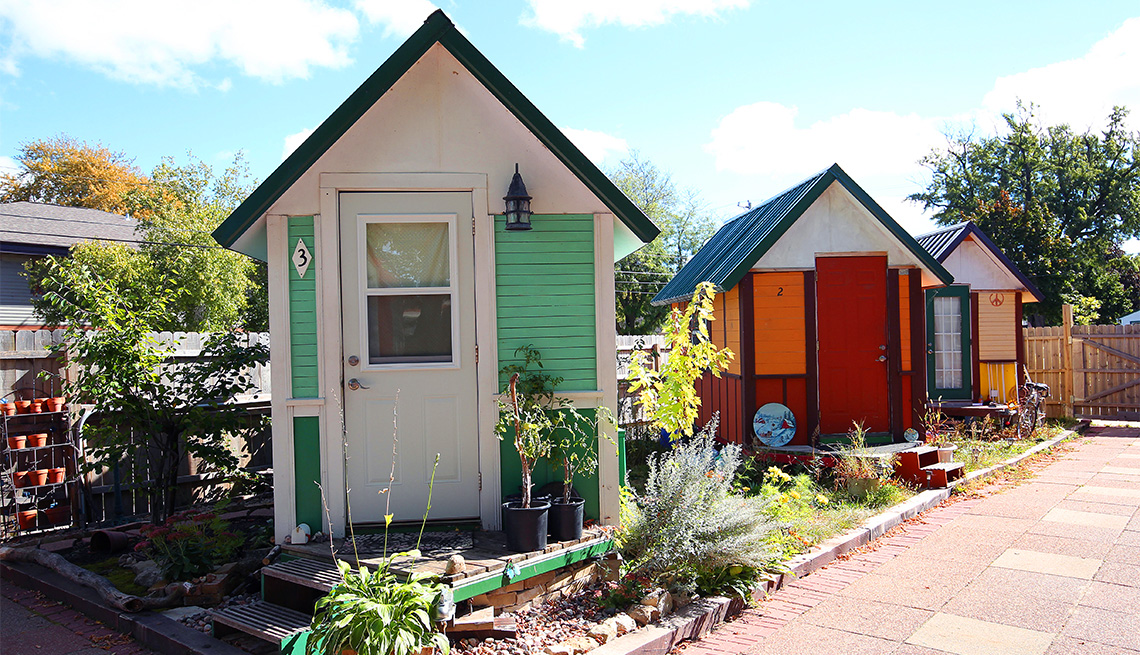 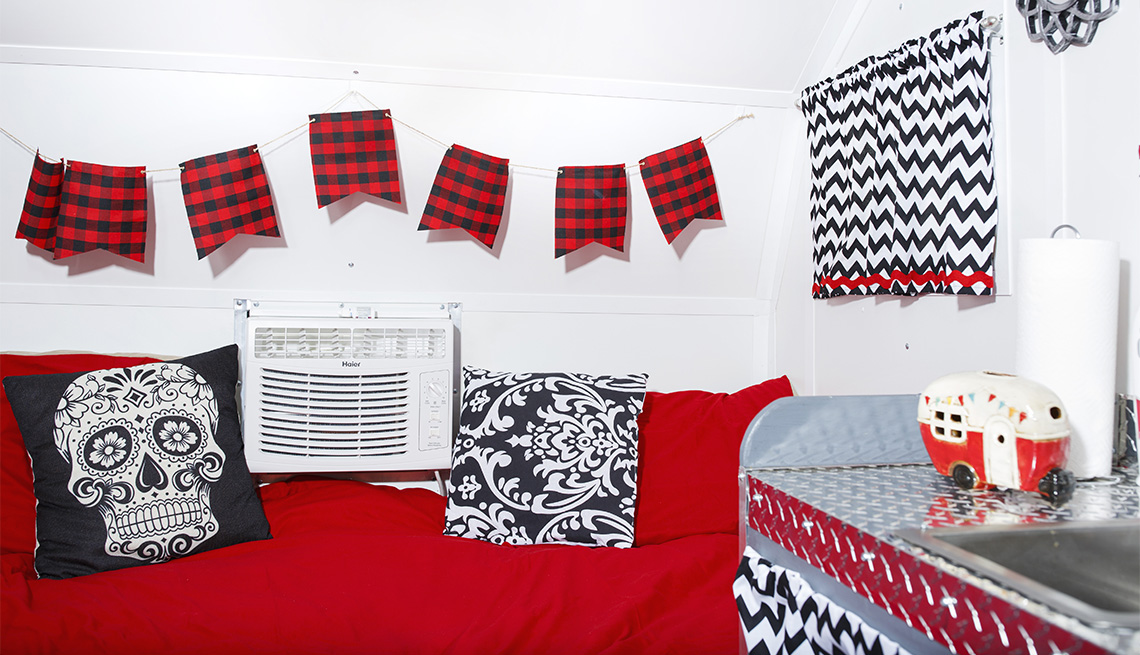 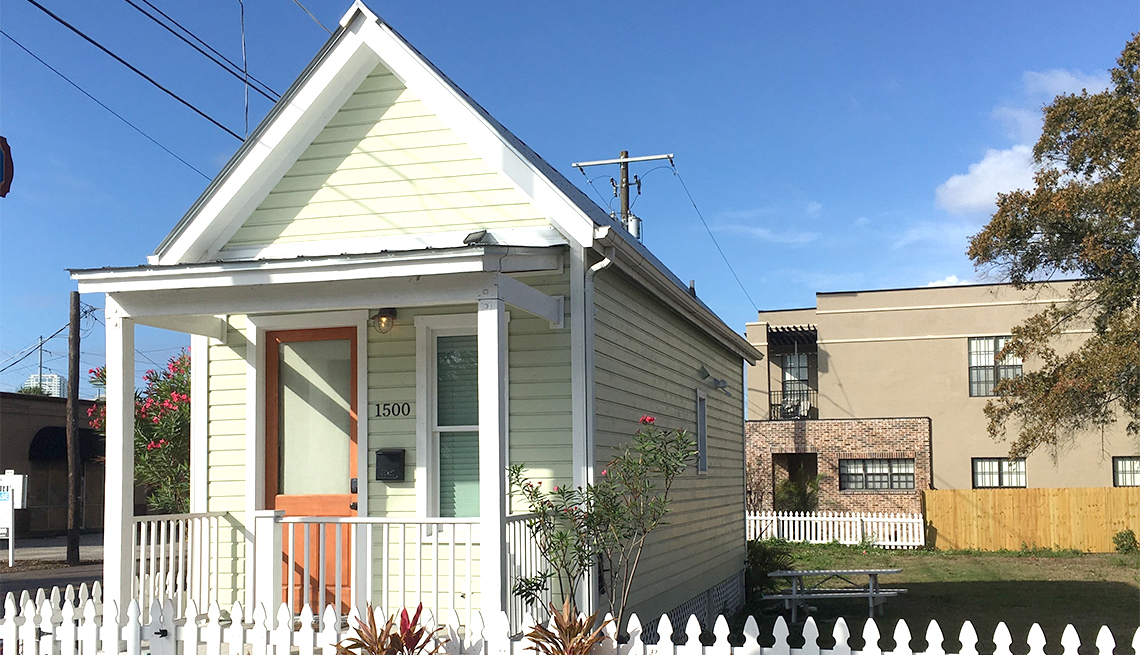 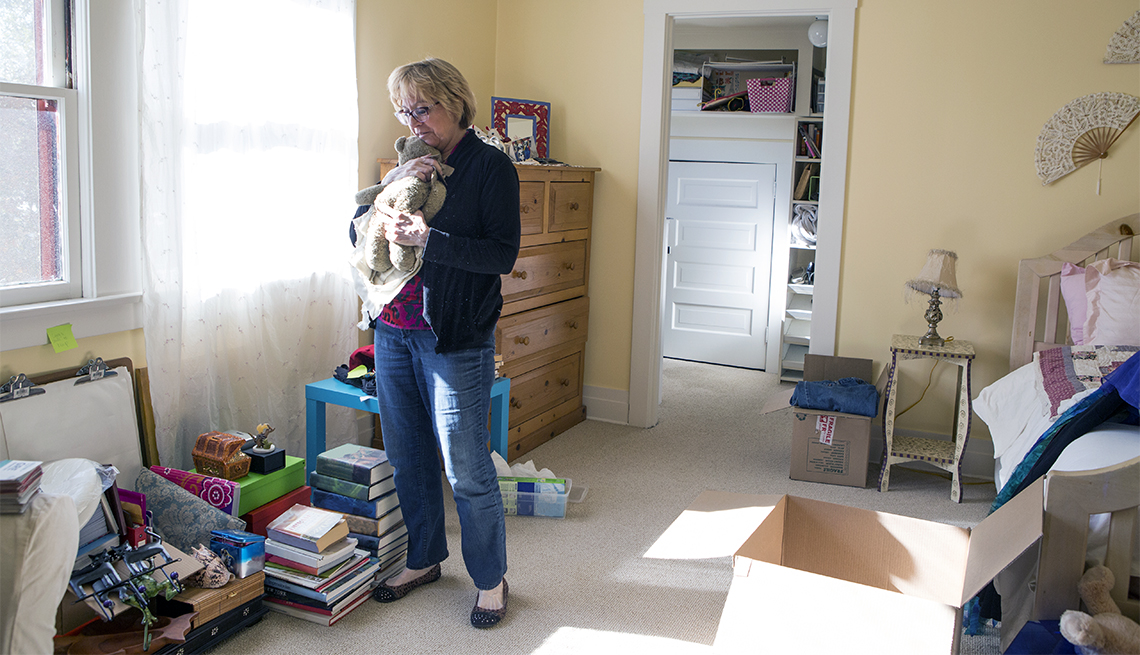 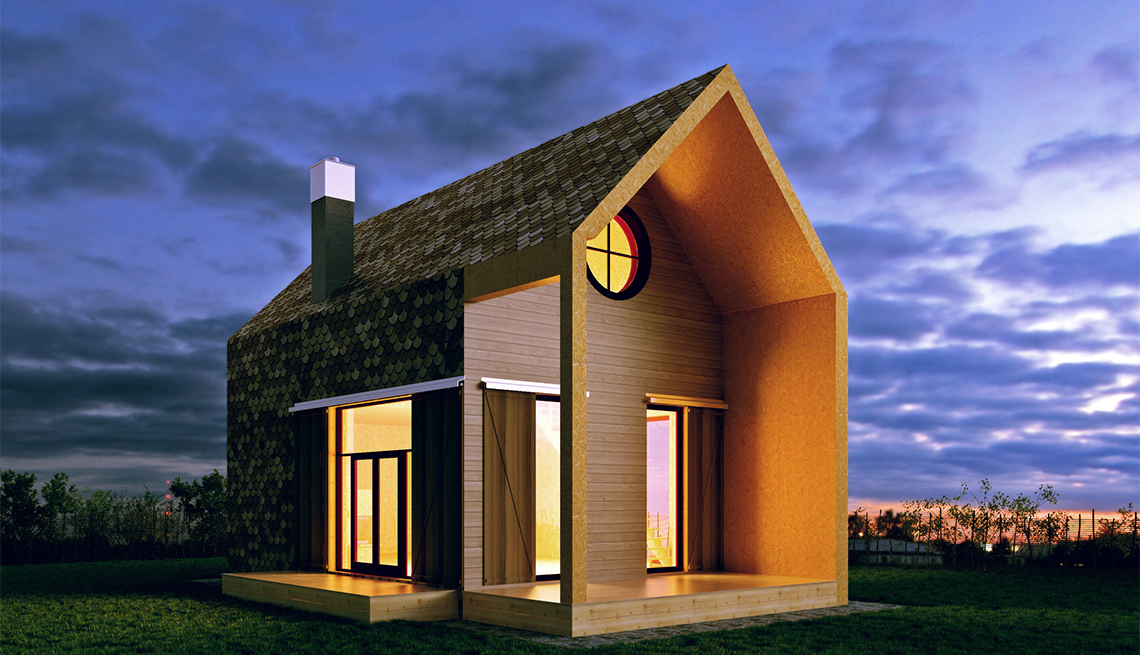