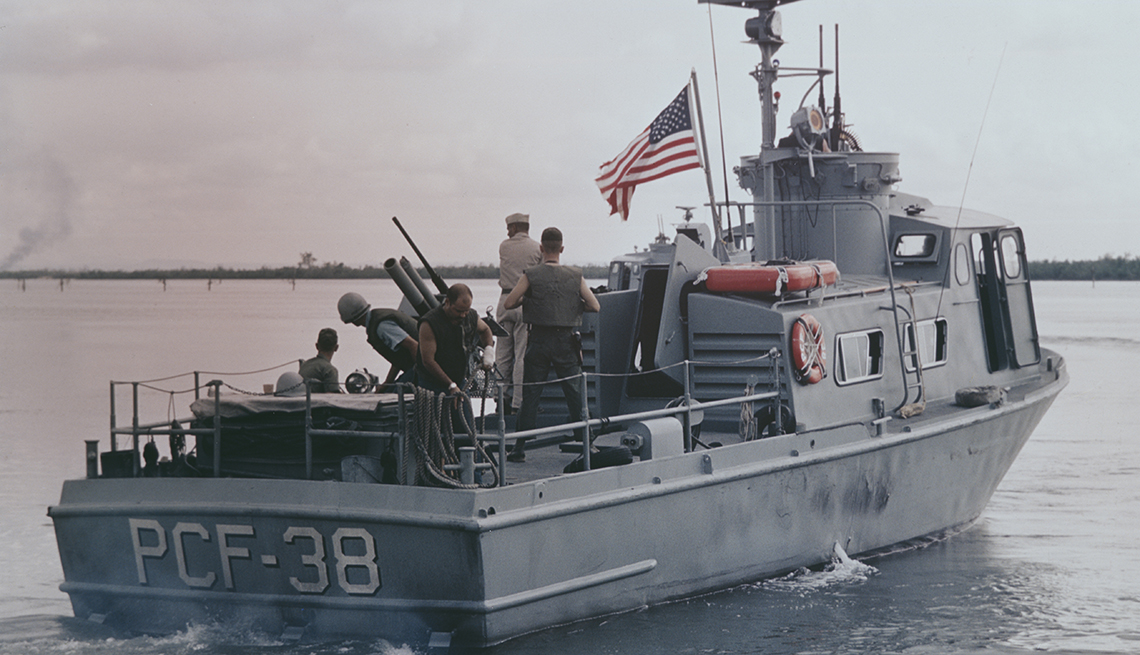 A United States Navy swift patrol boat operates off the coast of South Vietnam during the Vietnam War.

Tens of thousands of Vietnam veterans who served off the coast of Vietnam are a step closer to receiving disability benefits for Agent Orange exposure after a federal appeals court ruled in their favor this week.

In a 9-2 decision, a U.S. Court of Appeals for the Federal Circuit said that “blue water” veterans — those who were stationed on ships off the shore of Vietnam — are entitled to the same benefits for diseases associated with Agent Orange as those who served on land or Vietnam’s inland waterways.

The appeals court ruled that in passing the Agent Orange Act of 1991, Congress intended to include Vietnam’s territorial sea. That law said that veterans who contracted certain diseases could receive disability payments based on the presumption that those ailments were linked to exposure to Agent Orange, a toxic herbicide used to clear foliage in Vietnam.

The Department of Veterans Affairs has not said whether it intends to appeal the decision to the U.S. Supreme Court. “The VA is reviewing this decision and will determine an appropriate response,” an agency spokesperson said.

The VA is considering adding several other diseases — bladder cancer, hypothyroidism, hypertension and Parkinson’s-like symptoms — to the list.

Once an ailment is put on the list, the VA presumes the veteran who served in Vietnam got sick as a result of being exposed to Agent Orange, and the veteran is more likely to get disability benefits. For veterans who qualify for disability and their survivors who are entitled to death benefits, the payments can mean thousands of dollars a year.

The case, Procopio v. Wilkie, was brought by Alfred Procopio Jr., who served aboard the USS Intrepid from 1964 to 1967. In 1966, the ship was deployed off the coast of Vietnam. Procopio sought disability compensation for diabetes and prostate cancer, but the VA denied his claim because he had not served on land or the inland waters of Vietnam.

This week’s decision was hailed by Bart Stichman, executive director of the National Veterans Legal Services Program, which brought the 2008 case challenging the VA’s position on this issue.

“We are heartened that the court’s landmark decision unequivocally rights a wrong that is a terrible injustice to all veterans who were exposed to Agent Orange in the waters of Vietnam,” Stichman said.

Providing Agent Orange benefits to those who served in Vietnam’s territorial waters has drawn strong bipartisan support in the Congress.  Last year, the House of Representatives unanimously passed a bill to accomplish that goal, but the measure was blocked in the Senate.

B.J. Lawrence, national commander of the Veterans of Foreign Wars, which has been a strong advocate for “blue water” Navy veterans, said in a statement that “although very pleased with the ruling, the VFW isn’t quite ready to celebrate. That’s because the VA can always appeal the ruling and Congress has yet to pass a Blue Water Navy bill. We need to get this done and reinforce to tens of thousands of veterans that our nation does have your back when you come home from war.”