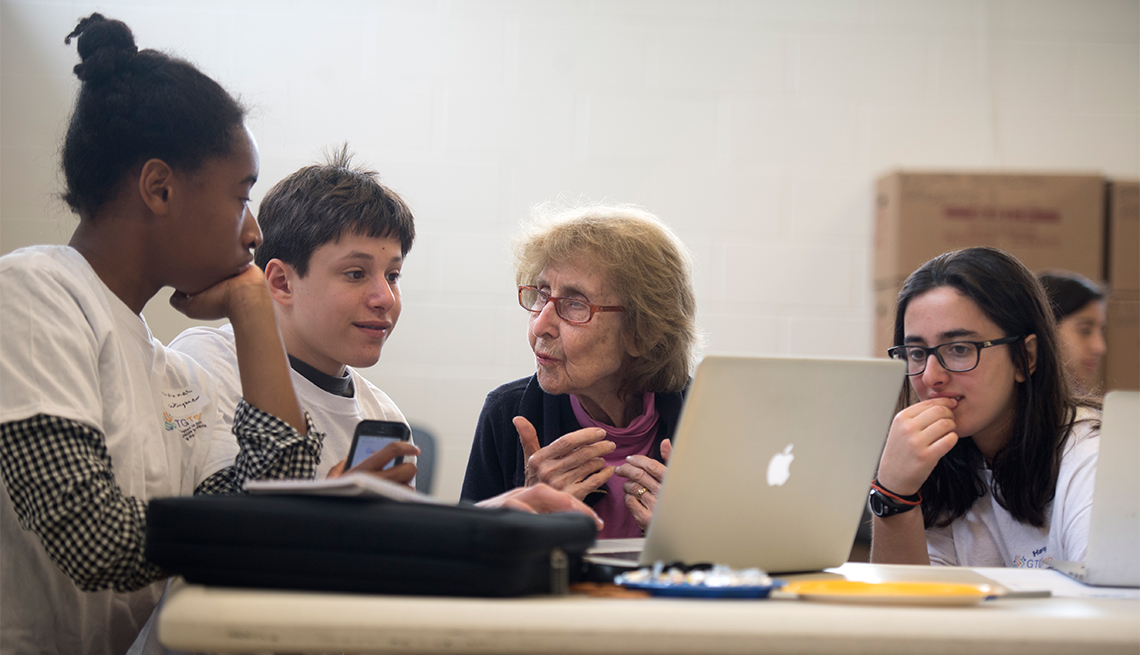 Evelyn Idelson, 91, (center) receives help with her laptop at the Chevy Chase Library in Washington, D.C.

There are few things that can make the uninitiated feel more tech inept than watching a teenager work a smartphone, and for seniors, that can be a problem.

Out of your granddaughter’s hands comes a dazzling collection of tiny cartoon characters and acronyms that make no sense, all flowing from her as though the phone were grafted onto her hands.  It all comes to a screen on your phone, and you may have absolutely no idea what to do with it or how to respond.

This generation gap in tech savviness can lead to a generation gap in overall communication, and that’s not good for the young or old. Three teens in the Washington, D.C., area realize this and are doing something about it.

Together, they formed GTGTech (short for generation-to-generation technology), a nonprofit that puts its goal simply: “Our mission is to help senior citizens navigate the brave new technological world.”

The teens are doing this by offering one-on-one training sessions with seniors on pretty much any tech topic — smartphone use, texting, digital safety, cloud computing and connecting to a network.

But through free training sessions, held at least once a month in libraries, senior centers and other public locations, the group gives older people the tech knowledge that helps them communicate with younger generations.

The impetus for the group occurred during a trip in 2016. "Aviah [cofounder Aviah Krupnick, now the group’s head of media] and I were in Costa Rica in April, and we were talking about how we wanted to do community service for the next year," Docter-Loeb recalls. (Community service is now a graduation requirement at many high schools.) The discussion turned to tech skills, and the two saw an opportunity.

By the end of October, the girls had formed the group, recruiting Kaela Marcus-Kurn as director of community engagement, and registered as a nonprofit. After holding its first two training sessions at Washington-area libraries, GTGTech partnered with several other groups, including the D.C. Commission on Aging Senior Initiative and the World Bank, to offer programs. As of now, it has hosted a dozen training sessions.

Although the generational tech gap is closing — a just-released survey by the Pew Research Center indicates tech adoption has climbed significantly among people 65 and older in the past few years — older people still significantly trail the rest of the U.S. population in tech usage.

Nearly half of all seniors surveyed by Pew do not have home broadband service, and one-third say they never use the internet. And while smartphone use is rapidly increasing, with 42 percent of seniors now owning one, compared with 18 percent in 2013, the figure is still almost half that of the rest of the U.S. population.

GTGTech’s founders say the gratitude of those who receive training is obvious.

“We get a lot of people who are really enthusiastic,” Krupnick says. “They’re really glad they found us.”

Docter-Loeb, Krupnick and Marcus-Kurn are looking at next steps. Other branches are forming in communities near Washington, and the three juniors are thinking about how they can pass on the organization to others once they graduate from high school.

"I think what's really cool is how many people we've worked with from all over the city,” Docter-Loeb says. "It's just hard to get help when you don't know what you need."