At the Best Buy store in Union Square in Manhattan, just before the official release of Windows 8, there was a throng gathered around the machines equipped with the new operating system. 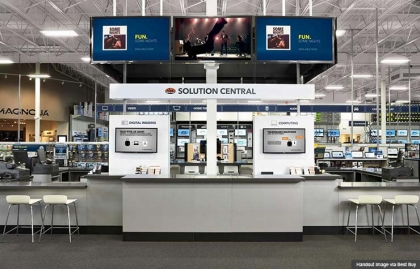 Best Buy wants to make sure consumers can have products up and working before they leave the store.

But the management of Best Buy had a different question. They wondered if these consumers would buy new machines at their stores, or would they simply look around, see what they want, then go home and buy it online for less money.

Just before Black Friday I witnessed a similar scene at my local Best Buy in Danbury, Conn., where consumers were looking closely at big screen TVs.  But would they buy them there? These are critical questions, not just for sales of computers and televisions, but for digital cameras, MP3 players, printers and almost everything else in Best Buy’s inventory.

These are not happy times for the nation’s biggest specialty retailer of consumer electronics. Its megastores have stopped paying the way. Internet-savvy consumers have found they don’t need to pay for Best Buy’s overhead. They can often get the same product online for a better price. Here are a couple of examples:

For the third quarter of 2012, the company lost $13 million. As a result it has closed roughly 50 of its more than 1,000 big box retail stores in the U.S. Now the retailer is rethinking the way it does business. And boomers and seniors could be playing a major role in Best Buy’s new business model.

The company is renovating its stores (albeit slowly), apparently taking a slice from Apple to turn its retail outlets into knowledge outlets. Not just selling products but making sure consumers can have them up and working before they leave the store. Best Buy is calling this new retail model its Connected Store.

I asked Josh Will, the Best Buy vice president for the new effort, to explain just what that means, “The Connected Store is our internal name for our next prototype, the best of Best Buy, which highlights our differentiation and training, and also highlights how we’re using the Geek Squad. We’re also adding new offerings such as appliances and high-end audio and video.”

The Geek Squad has been one of Best Buy’s most recognizable successes. It offers service over the phone, online, in the store, or even at your home and office. And its brown-shirted ambassadors of tech savvy are slated to play an even bigger role in the new Best Buy.

While the company is only planning to remodel and renovate about 5 percent of its full-sized U.S. stores in the first go-round, it’s planning to create the "Geek Squad Solutions Central" in many more.

According to Will, "As part of all the redesigns and remodels, Geek Squad Solutions Central will help customers get their devices up and running when they walk out of the store, as well as free services, tutorials and clinics to discover the possibilities of mobile phones, tablets, computers, cameras and a wide array of other products and services." Sounds a little like the Genius Bar at your Apple Store.

For boomers and seniors who are either not tech savvy, or just don’t want to put up with the frustration of getting a complex product up and running, paying a little more, whether in price or for service, could well be justifiable. Just how crucial is our demographic to the chain? The company says the 50-plus demographic is very important to everything it does.

Next page: Targeted products and more ways that Best Buy is hoping to win senior loyalty. »

Another way in which Best Buy is hoping to win our loyalty is with the introduction of targeted products.

For example, Best Buy is now the exclusive marketer of the Narrator HD radio by Insignia with Reader Service. That’s a nationwide group of radio stations available on the HD channels that provide audio versions of books and periodicals. The radio is designed with voice menus and big buttons to make it easy to navigate.

Best Buy already works with vendors to custom design mainstream products for its stores. With the change in emphasis, we might expect to see more products tailored to the needs of an aging population.

But Best Buy hopes to change in more subtle ways that will help us as well. For example finding out how a customer intends to use a product before he walks out of the store.

If you are buying a desktop computer, how are you going to use it? Will it be for email, for Web surfing, to look at pictures? If so, you might be asked if you need to install or learn the software you’ll need. Do you have an Internet provider? Do you need a wireless router, a printer, a digital camera?

These are opportunities not only to become more valuable to the customer, but obviously to increase sales as well.

Will put it this way, "What are the products or education you need to get it working — in many cases we’ll help you get it up and working before you leave the store. If we can get consumers to use technology, the more technology they are likely to buy, and buy from Best Buy. We’re trying to develop an environment so our (sales staffers) understand the needs of our customers. We will provide classes and clinics where we can get customers together who face the same problems, whether it’s learning the basics of digital photography, to getting the most out of a cellphone."

All of this is going to take time. At the current rate it would take Best Buy years to revamp all its stores, though it can certainly implement things like "Geek Squad Solutions Central" far more quickly. In the final analysis, it may well be the value that Best Buy can add to its interaction with customers that can prevent it from going the way of the late Circuit City.