Steve Austin, 81, has done what few people his age have done before: gone viral on TikTok.

"Old Man Steve,” as he has dubbed himself, is shy of 640,000 followers and 6.5 million likes on the video-sharing social media platform where 80 percent of users are 16-34 years old. His short “cooking” videos show off his lighthearted sense of humor and positive attitude.

"I know that it's kind of silly and I don't really cook,” says Austin. “I just make a sandwich or eat a bowl of cereal. It's not really cooking, but people seem to enjoy that. So I ran with it."

Austin says he couldn't make videos of himself dancing and jumping around like most of his fellow TikTokers. Instead, he spreads messages about believing in oneself and putting on a smile. Many of his followers comment that Austin's words have been a positive influence in their lives.

"That makes me feel good that they listen to me and take what I say to heart,” he says. “I live alone. So I really do feel the love that I'm getting from the comments. It really makes me feel not so alone." 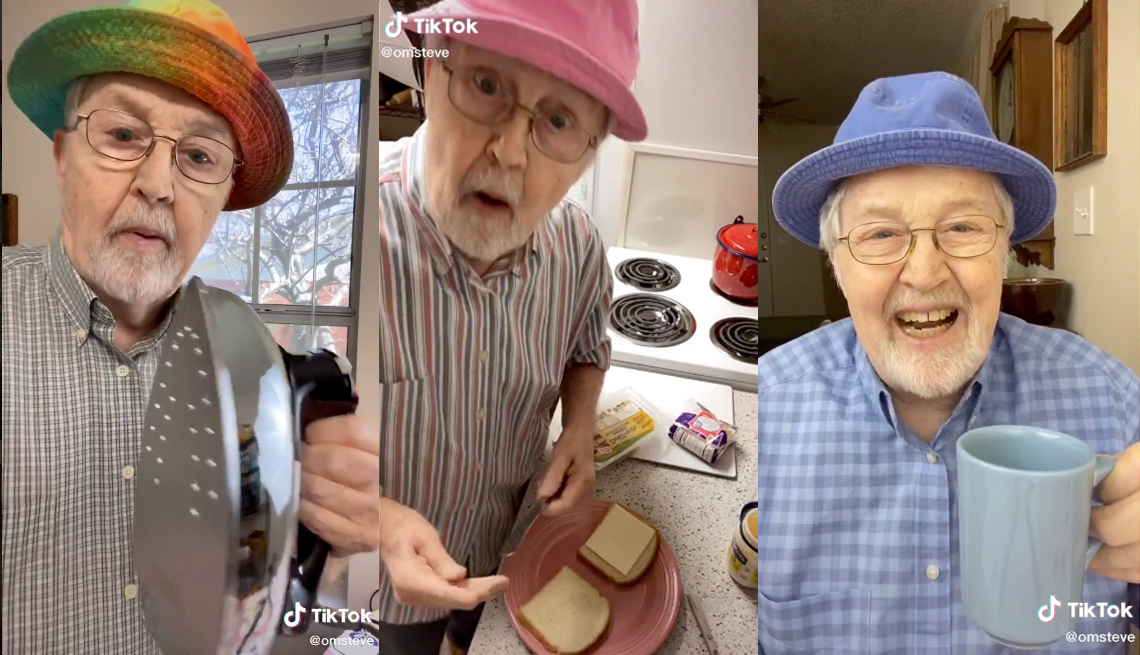 "I thought it looked good and made me look different. So I bought a couple of them, and then through the years it's become sort of a trademark to me. I probably have about 50 hats now."

See more of his posts on TikTok @omsteve.

The Dallas native relocated to Fort Worth, Texas, to be closer to his sister, a retired police officer. He lives in a senior apartment complex, where, he says, “I have a lot of great neighbors. It's nice to be around people my age."

Although Austin has no children or grandchildren, his followers refer to him as grandpa, often commenting online that he either reminds them of their own grandpas or they'd like him to be their grandpa.

He encourages his young followers to stay in touch with grandparents, parents or older neighbors.

"Go spend the day with them … call them up and see how they're doing,” he says. “Don't forget about your elderly people."

Austin first posted to TikTok in 2016 and took several hiatuses in the years since, returning to the app about six months ago. That's when his popularity really took off.

However, Austin is no stranger to the limelight. As a fan of musical theater, he headed to New York in 1959, working on and off for eight years in the box office for a variety of shows. During this time, he says, he found himself invited to cast parties and rubbed shoulders with such stars as Kathryn Grayson, Myrna Loy, Carol Channing and Tab Hunter.

Austin says he's always been a ham, and no one taught the social media influencer how to make videos. He learned it all from Google searches, YouTube videos, and “a lot of trial and error."

"I think every older person should try, not doing what I'm doing, but a hobby or being involved with the church or the local community. Something to keep them active, that's gonna be the best thing for you,” he says. Austin calls the internet a “blessing” for older adults because families spread out across the U.S. can now communicate with each other as never before.

"I think the internet is really great for older people, and I wish that more companies would cater to older people and find products and ways for them to express themselves,” he says. “I think that would be a great thing for them to do. Well, now, here I am on my soapbox."