It’s the rare company training session that opens with an enthusiastic rendition of “Jingle Bells” by round-bellied, rosy-cheeked, bushy-bearded men (average age about 65). But that’s what happened in a nondescript conference room of a suburban Denver hotel on an autumn Sunday. Bells appeared, and soon the singing men were on their feet, bouncing up and down and swinging their arms. When they hit that final “ho-ho-ho!,” they brought the house down — which is to say, there was back-slapping, chortling and bellowing of “Merry Christmas!”

Welcome to Santa University, a four-day training program open to the roughly 1,000 naturally bearded Santas who work for Cherry Hill Programs. The company places jolly ol’ elves in 675 retail centers across the country, promising a “turnkey Santa mall experience.” In today’s America, even the kindly Kriss Kringle of 34th Street fame has been corporatized.

The training session convenes each year in Westminster, Colo. It’s not required of Cherry Hill’s employees, which means the 73 Santas here paid their own travel and lodging to learn the ins and outs of portraying old St. Nick. For some, this is their first session; others return repeatedly, eager to reconnect with the brotherhood of the bearded. “There’s a lot of mentorship that takes place at Santa University,” says Santa James Smetana, 66, of St. Paul, Minn. “And it gets us so excited for the Christmas season.” 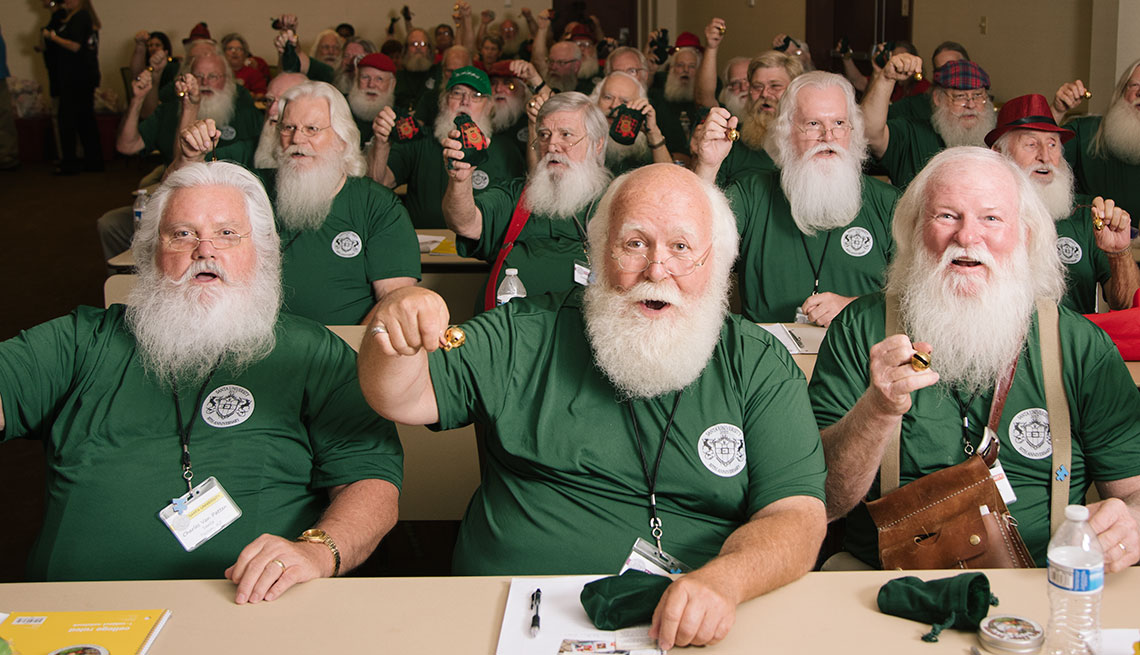 Which one is Santa? Well, all 1,000 hope to be — that is, if they make it through Santa University in Colorado.

They come from a variety of backgrounds: oil field workers, bus drivers, a lawyer, a former salesman at a camera store. While most are retired, others have day jobs and use vacation or unpaid time off to perform their Santa-by-proxy duties. One trainee was a federal ranger in his previous life. Another ran a hardware store (fittingly, it also sold toys) in Spokane, Wash. Some Santas are married with children; others, lifelong bachelors. One Santa tells of recently being tracked down by a 57-year-old daughter he didn’t know he’d fathered. It felt like a Christmas miracle, he says.

Many of these bearded men report being recruited for Cherry Hill Programs. Most had been mistaken for Santa since growing out their long beards anyway (some also carry around natural padding in their midsection). Smetana says the big chair found him. After three people told him on a single summer day that he looked like Santa (while in street clothes — in fact, he was wearing shorts), he joined a Minnesota Santa group and got his big break with Cherry Hill.

A Santa job is a good opportunity for older workers, says Judy Noerr, Cherry Hill guest experience officer. “For so many people, as they age, life narrows,” she says. “Being Santa offers connection and the chance to really mean something to someone.” 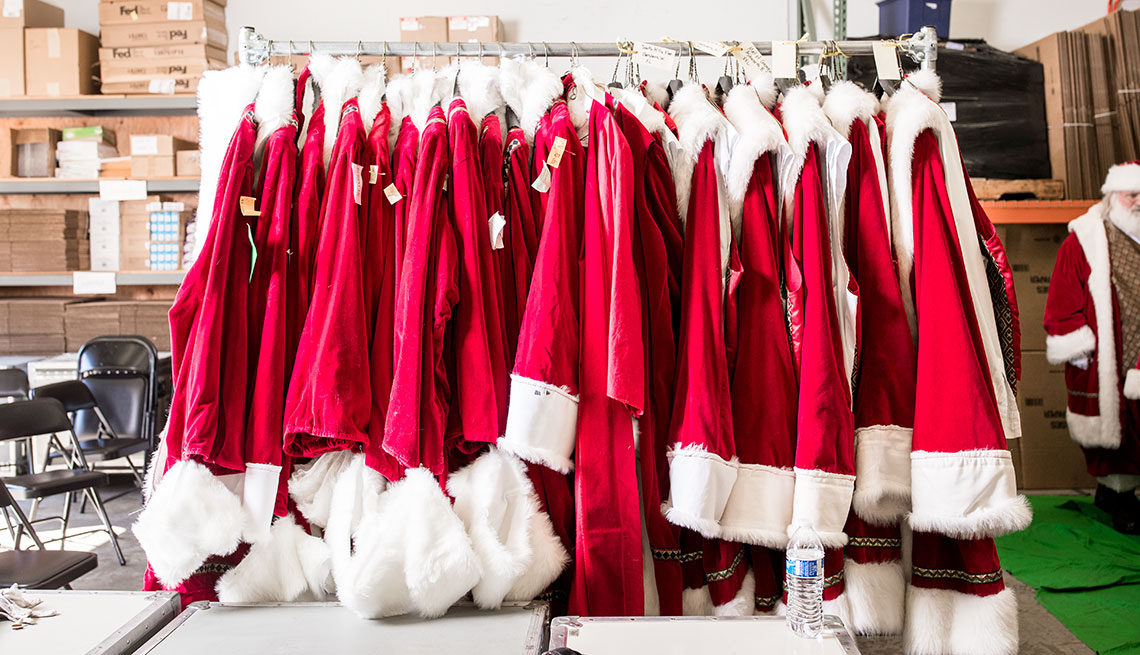 Santa's closet looks a bit different from ours — can't have too many good suits.

Noerr has been in the yuletide industry since 1981. She was running an event company that staged shopping center grand openings when managers at a mall suggested their Santas needed a “theatrical” upgrade. She offered this deal: Noerr Programs (which recently merged with competitor Cherry Hill in a deal that no doubt rocked the North Pole) would provide a well-costumed cast of trained professionals — a Christmastime promotional draw. Then the company would earn the profits from the sale of photos and merchandise. Its success was immediate. Everything about Santa (except for his actual existence) was made real — the costumes from thick velveteen, the gloves silken. And that beard? Natural. “It was never a question,” Noerr says of the mandate that Santas’ whiskers must be their own. “There’s a lot of anticipation around Santa, and visiting him can be very emotional for children. For the experience to be as magical as we envisioned, Santa had to have a natural beard.”

With the merger, Cherry Hill Programs became the largest naturally bearded Santa provider in the country, according to Noerr. Competitors exist, but standards can be slack (including those dreaded fake beards). The Charles W. Howard Santa School in Midland, Mich., is the country’s oldest trainer, celebrating its 80th anniversary this year, but unlike Cherry Hill Programs, the Howard school does not place Santas in jobs.

At Cherry Hill’s school, Santas learn how to have a healthy, pain-free season. Trainees hear from a chiropractor about body positioning that’s easy on the joints while holding children. They learn about nutrition for maintaining energy and boosting their immune system. Other sessions deal with tough situations — crying children, recalcitrant animals on “Pets with Santa” nights at the mall. They learn how to keep their beards and hair white and silky, the best way to launder their suit, and why they aren’t allowed to eat at the mall food court during their breaks (no child wants to spy Santa scarfing down tacos).

Despite a long line of mostly excited (some frightened) children, a good mall Santa tries to make a connection with each present seeker. “Santa Claus is unconditional love,” says Elmer Pearsol, 70, of Eagle Springs, N.C. Now retired, Pearsol plays Santa year-round, including at his niece’s wedding reception, where he was “Uncle Santa.” “It doesn’t matter who you are, where you come from, your race, your religion or anything. If I can make a child smile, I am doing my job.”

Not that the work is all peppermint sticks and carrots for Rudolph. Many a mall Santa has a doleful tale from a past experience in the big chair: single mothers in distress or a child with a heartbreaking request (one Santa recalls a child asking for a weapon so he could stop “the man who is hurting my mom.” Cherry Hill Programs has systems in place to contact authorities if Santas suspect abuse.)

But ultimately, being Santa means lifting the spirits of others, which boosts the Santas’ own personal joy, says Terry Bell, 67, of Springfield, Ill. “I go home every night, and my chest hurts from laughing so hard,” he says. “Folks see me and say, ‘Man, you have the greatest job ever.’ Yep, I do. And when you look like I do, it’s year-round. How could it get any better than that?” 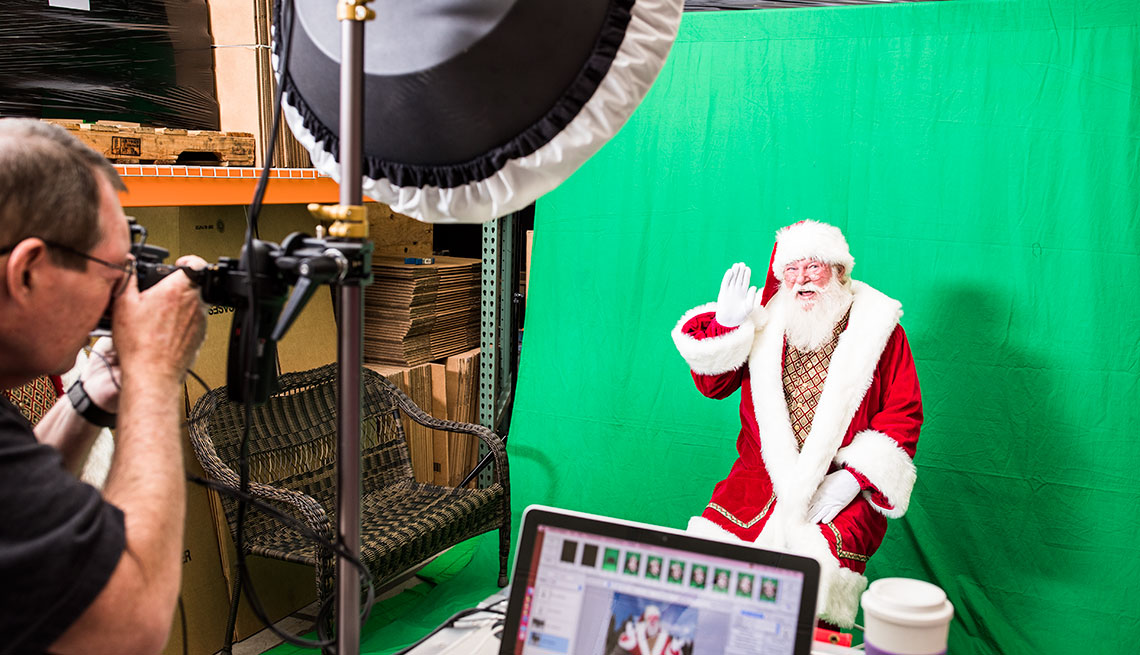 Santa practices taking the perfect picture, even if a child starts to cry on his lap. 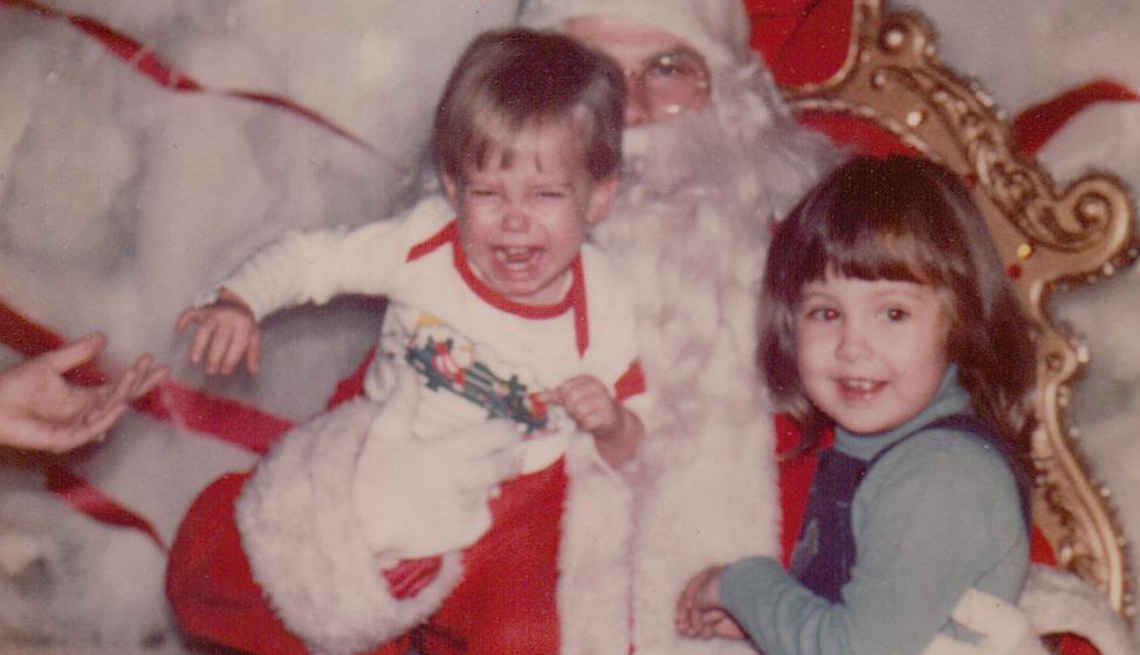