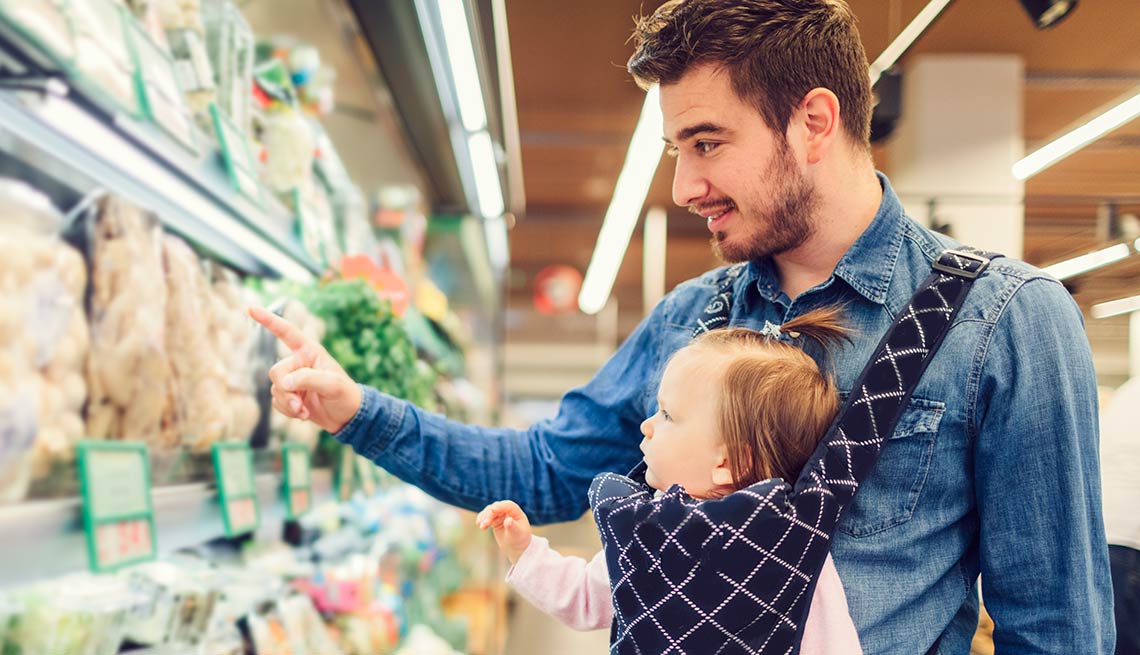 En español | If you spot a dad with tots in tow at the supermarket or on the playground, don't assume that he's giving the mom a break from parenting duties. It's just one indication that some millennials take a different approach to fatherhood than older generations.

While many traditional dads still exist in households where both parents work, a significant number are challenging stereotypes. We checked in with two of them.

Austin Dowd, 32, cares for his sons, ages 5 and 2, in suburban Raleigh, N.C., while his wife works full time in IT security. A photojournalist, Dowd decided to put his career on the back burner after his first son was born. He joined more than a half-million men on the so-called "daddy track," a figure that has doubled since the 1970s, with an increasing number of women breadwinners and escalating child care costs.

In an effort to find others in the same situation, Dowd joined the National At-Home Dad Network and organized a group of local fathers who gather weekly for playground meet-ups and "pancakes and play sets" in a member's home. "Guys have to seek out those communities," he says, adding with a laugh, "and as much as we spend time talking about discipline and other child issues, we also talk about movies and beer."

Another millennial dad, Simon Isaacs, also sees big changes in the way younger men approach parenting. When the New Yorker and his wife were expecting their first child, both jumped online looking for parenting websites. What Isaacs found was that the web was dominated by more than 4 million blogs for moms but very few for dads. So in typical millennial entrepreneurial fashion, he and a business partner launched the website Fatherly in April 2015. Fatherly bills itself as a practical lifestyle guide, with articles ranging from books on potty training to iconic road-trip vacations. The site has been a huge success, according to Isaacs. "We found that men are far more engaged in their families than ever before and really want to break that glass ceiling at home."

Isaacs, 35, the father of a 15-month-old daughter, notes that a popular topic is dads and daughters. "Millennial dads are looking for ways to support young girls, breaking down gender stereotypes," he says.

What surprised him and other editors was the popularity of the "2 Minute Therapy" column, which deals with couples' relationship issues. "Dual-income couples have very ambitious desires when it comes to both home and career, and that presents challenges to their relationships," he says.

Both Isaacs and Dowd offer the following advice to parents of millennial fathers:

* Recognize that your son is more conflicted about work-life balance. While the vast majority would like to take a long parental leave or even be a stay-at-home dad, they are recognizing that, just like moms, they can't have it all, Isaacs says. They need your compassion.

* Don't ask a millennial dad if it's mom's day off. "I'll be at Trader Joe's, and occasionally I'll get those comments," Dowd says.

* Stay-at-home dads write their own rule book. "Moms often follow a prescribed mom code, but men invent their own," Dowd says. "My priority is to get my sons outdoors as much as possible so they can burn off some energy."

* They don't need your advice. "Back in the '80s when you needed advice, you asked neighbors and friends. But we have the internet. When there's an issue, we jump online, and there's all the information we need," Dowd says.

* Spend time with your son's family. Most men tend to spend more time with their wives' families. But family is about everyone, Isaacs says. So when both parents are working and have limited time, try to go to them more than they come to you.