On my great-aunt Ruth's 90th birthday, after lobster and a blueberry pie she'd made herself, the birthday girl reached into her blouse, pulled out the soft breast prosthesis she'd worn since a mastectomy nearly 30 years before, and tossed it across the room to my husband's friend. "Catch this, honey!" Ruthie said, and he did, with that auto-reflex guy gesture of intercepting a football midair. When he realized what he'd done, his face flamed, exactly as she'd hoped it would. "I just wanted one more feel before I die," she said. 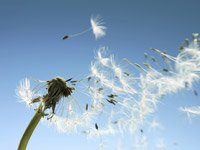 What Makes Life Worth Living?
Take our poll and compare your answers with others.

How Will You Know When It's Your Time?
Share your thoughts with others in our online community.

I think my mother snort-laughed a strawberry daiquiri. I looked at my great-aunt in wonder. "I want to be like her," I thought. Funny and fearless and life embracing. Yes, she was silver-haired and a little stooped, but she had a generous hand with mascara and lipstick. She cheated at canasta and swore when she lost. She had strong opinions, yet didn't act as if the world were ending when a younger person disagreed with her. I'd been sniveling about turning 40 that year, and suddenly I wasn't daunted by what lay ahead.

Two years later, Ruthie died of pneumonia, whispering to my mother in the ER, "Honey, this is just about enough." Minutes later, she was gone. How seamless it was, how graceful, how easy.

Or, at least, that's what I thought. When I said as much to my father, he gasped, "Are you kidding ?" Ruthie had lived with my parents at their lakeside home in New Hampshire since she turned 85, by which point she'd been widowed twice and outlived both of her children. "Not easy," Dad said. "When you kids weren't around, she fought us tooth and nail. She was the consummate survivor - she'd have tossed other folks out of the last Titanic lifeboat. We loved her, but she plain wore us out. I'm not going to do that to my kids, and you'd better not do it to yours, either."

A few years after that, his cancer went fast, seven months door-to-door. He died at 76. My mother's Alzheimer's was slower but just as definitive, and yes, trying to keep her with us and safe - in our home, on the planet - wore us out. Sorrow is about a hundred times heavier than a hospital bed. "We won't do that to you," my husband and I promised my son after Mom died at 85. But, of course, we might break that promise if, when the time comes, we don't have the ability to keep it.

Each generation grapples with end-of-life issues - our own, our parents', even, in some unthinkable cases, our children's - but each time it comes as breaking news. A recent flurry of prominent articles with subtitles such as "What I Learned From the Last Days of My Mom and Dad" and "A Son's Plea to Let His Mother Go" brought into stark relief the challenge of caring for intractably ill parents while coping with a labyrinthine and balky health care system, not to mention grief. Amid the voices coming at me when my parents were struggling, amid the paperwork and the oft-competing emotions of love and duty, it seemed I was asking myself, "When is enough enough?" How could I, or should I, decide for others? For that matter, how will I decide for myself? What's the last straw, the deal breaker, the ticket to ride? Have I learned enough, have I been clear enough, to help my loved ones when it's time for them to take this journey with me?

I remembered sitting on the couch late one night with my paternal grandmother, then in her early 90s, as we looked through an old album of family photographs. When she came upon a sepia portrait of her sisters and brothers (she was the youngest of nine), she touched it softly and murmured, "If you live long enough, you bury everyone you ever loved, which is too long, if you ask me." I don't think she even knew she was speaking out loud. A devout Catholic, she never would've asked anyone to help her die, but I know she asked God to speed it up and grew angry when he didn't.

On the other hand, you've got people like 92-year-old Rose Rohr, who last year survived a ruptured aortic aneurysm. When she first felt pain, she made a split-second decision, she says, between calling 911 or "going to meet my maker." Rose called the docs, they performed a minimally invasive repair, and her maker gave her a rain check. Now she is back in her own apartment, attending Mass every morning and feeling fine. Who wants to tell her that 91 years would have been plenty long to live? Not I. The life force is an amazing thing - mystical and intangible, confounding and sometimes totally surprising in its insistence against all odds. As 50-something humorist Andy Borowitz recently tweeted, "Figuring out how to not die is on my bucket list."

My friend Dave Daignault, 51, a painting contractor in Redding, Conn., and also a rock musician and fine-arts painter, isn't planning on checking out anytime soon, either. But he's well aware of the curveballs life can throw. Dave recently lost his father after a four-year struggle with ALS (Lou Gehrig's disease). Now he looks at his 12-year-old son and 11-year-old daughter and winces at the idea that they might ever experience such pain over him. "I don't want them to carry me," he says. "It's not their job. I have a great love, a great life and I don't want to make bargains with God or whomever just to extend it one more day. I'm healthy now, but if tomorrow I'm not? I'm grateful and outta here." Don't his wife and kids get a vote? I asked him. He grins. "Yes, and they always outvote me. I'll probably be banging out classic rock while getting liquid spinach through a feeding tube." Then his jaw tightens. "No. That is not going to happen. I want my life, but not at the expense of my children's."

Katy Butler, 63, a San Francisco-area writer and teacher, saw a deep contrast between her father's protracted death from heart disease and dementia, and her mother's briefer, more peaceful passing from heart failure, after she'd refused valve surgery. It's one thing to deal with an ailing parent when the other parent - a terrified spouse - is standing beside us saying, "We must do everything we can," and the doctors nod, and swiftly, there are machines and processes and medications. It's another thing to support a widowed parent who has walked through that hell once and doesn't want anyone to endure it again. "Early death - a child, a young parent, young people at war or in accidents - these are tragedies. But the death of someone who's had a long life isn't necessarily a tragedy," says Butler, whose book, Knocking on Heaven's Door: A Daughter's Journey Through Old Age and New Medicine, will be published next year. "The machinery of modern American medicine is horribly efficient at preventing death, and not efficient at helping families decide how far they want to take things," she says. "The old - the ones we want to protect - often become the victims."

Whatever happens in health care policy, no matter how many agonized cris de coeur we write or read, there is no way to answer absolutely for someone else what kind of life is worth living and when it's okay to stop trying to save that life and focus on comfort and peace. My adult son, who witnessed every step I took with my parents, is now the primary decision maker for his 101-year-old grandmother, my former mother-in-law. Although frail and in a 24-hour-care facility, she's in full possession of her marbles and a Netflix subscription (French films, no subtitles). Will he help keep me around until I'm 101, too? Will I want that? Or (my worst fear) will he, my husband, and our grandson do battle in the hallway about it? No way to know. We can only keep the conversation open, using real words, real scenarios and the value of the real experience we've already shared.

For me, the fundamental question keeps being answered with laughter. It's the one dependable legacy my siblings and I inherited from our parents and from Aunt Ruthie, who laughed on the darkest days and loved the sound of laughter around her. Humor runs as deep through my family tree as music does, and it works in the same way - healing, familiar, even spine building.

When I can't laugh, when nobody can make me laugh, I'm with my friend Dave: outta here. I think.

Larkin Warren has coauthored seven memoirs, most recently Carissa Phelps's Runaway Girl: Escaping Life on the Streets, One Helping Hand at a Time. She's working on a memoir of her own.

Also of interest: Creating a living will.