Trying to date immediately after a relationship ends is ill-advised. While it may be what we are instinctively inclined to do, dating before you are emotionally ready is a recipe for disaster. Why? You're likely to feel awkward, unhappy, anxious and numb — and who wants to date that person? 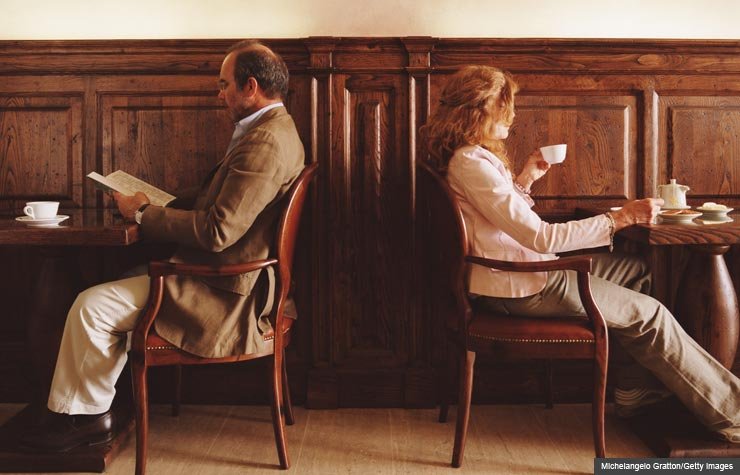 Dating in denial is a dead end. Mend your broken heart first.

The fact is, it's nearly impossible to hide a broken heart; I know I fooled no one when I was trying to do so. My anxiety was evidenced by my inability to make eye contact with a date, which was a sign to women that the lights were on but no one was home emotionally. My fixed-smile mask, a smirk really, wasn't a confidence builder either.

I was present in body, of course, but not in spirit. In one case, I double-dated with a friend and his partner, who had fixed me up with an attractive woman who had clearly spent time on her outfit, hair and makeup. I didn't even see that she was a knockout because I was blind to everything except my own pain. While my date was moving forward, I was stuck in reverse. When she engaged me in conversation, I mumbled one-word answers. I didn't know whether to say good-bye or apologize at the end of the evening, so I mumbled both. My friend didn't mumble, however, when he said, "No more dates, Ken."

I should have stopped dating cold turkey after that. But I was still addicted to the notion that the only way to make myself feel better was to find someone new. I clung to the foolish idea that a new woman could make my sorrow disappear, so I went on a few more disastrous dates.

The sage counsel I sorely needed came from my best friends — men who loved me, didn't judge me and supported my need to rebuild my heart and spirit. I shared my feelings about the breakup openly and honestly, and asked how they had managed their own heartbreaks. They told me to do things like sit quietly at home, alone, and allow myself to feel the pain rather than continuing to avoid it by going out. I needed to invite it in for as long as it took to heal.

They mentioned a few months of introspection as a good start. It took five.

At first I kept the television on, but I couldn't pay attention — it was just noise. I discovered that quiet music was soothing, so I stretched out on my sofa listening to classical music and allowed my feelings to surface, unrestrained. In time, I realized that ignoring my feelings had just kept the pain alive. My mantra became "Don't think, feel."

To my surprise, and great relief, after several months my spirits began to rise. I was laughing at late-night comedians' jokes again. I wasn't avoiding the cartoons in magazines. I began hanging out with my friends again and found joy in their concern. The signal that I had healed was that I felt glad to be alive again.

When I felt ready to date, I met a savvy woman who asked me a defining first-date question: "What did you learn from your last relationship?" I explained that I had taken a sabbatical from dating and had spent that time examining my feelings and my relationship behavior. I realized I hadn't been a good listener, which meant I was never really present on my dates. In addition, I had avoided my feelings, but I was on friendly terms with them now.

I felt proud that I could answer her question with something substantive. Most men I knew didn't take time between relationships. They simply moved to the next one, albeit with baggage.

Healing a broken heart wasn't a day at the beach, but I accomplished it by treating myself with the kindness, compassion and patience I'd show a best friend. I cooked terrific dinners for myself and ate them slowly and appreciatively. I worked out, and rewarded myself with massages. I watched my favorite movies. And most important, I forgave myself for my part in the failed relationship.

On the plus side, I developed skills that have subsequently helped me in relationships with both women and men. I've become a better listener, and I no longer feel I have to fix anyone's problems. I'm able to accept my part in relationship issues, and I can see this as a strength, not a weakness. I maintain my composure during disagreements instead of losing my temper. I look for solutions instead of someone to blame.

Dating in denial is a dead end. Mend your broken heart first.