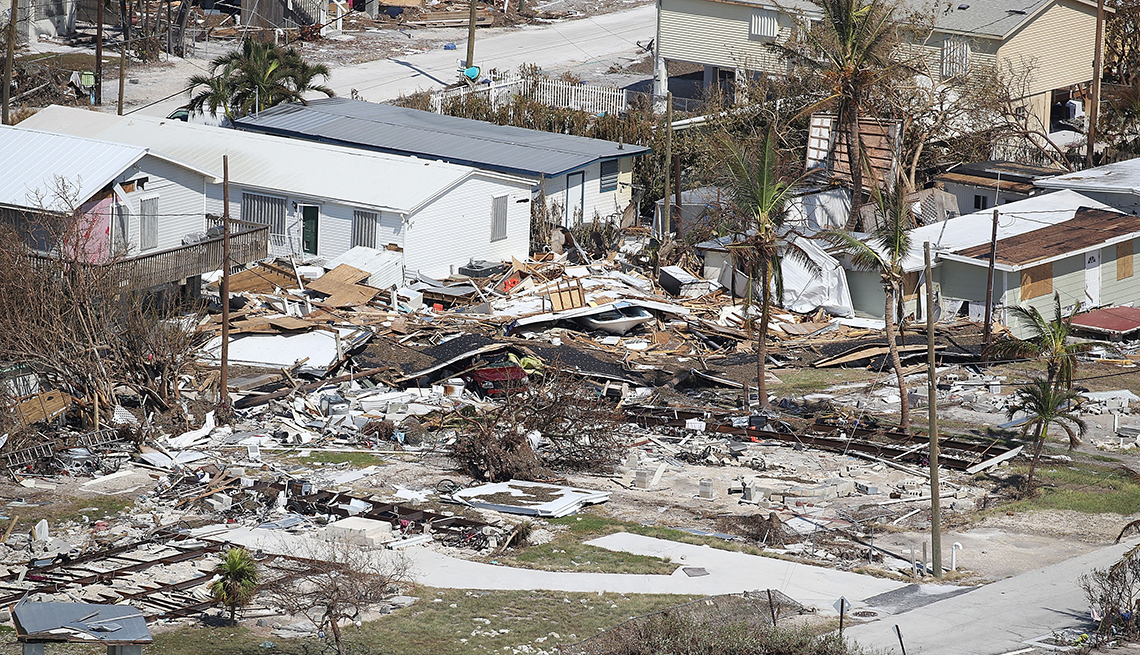 Many facilities face extensive renovation or reconstruction after the hurricanes in Texas and Florida. Here you see damage done by Hurricane Irma to a residential neighborhood in Marathon, Fla.

As millions in Texas and Florida begin to dig out from hurricanes Harvey and Irma, experts say the best thing families of nursing home residents can do is let loved ones know you care, be patient and let them tell you what they need to help put their lives back together.

“There are a variety of ways older people will react’’ to the kind of disaster Texans and Floridians are going through, said Terry Fulmer, president of the John A. Hartford Foundation, a New York City-based organization focused on improving the care of older adults. Some patients, Fulmer said, will say this is God’s will and be content to ride out what’s happening; others will ask why they’re not being helped more. Still others will be totally disoriented by the uncertainty and worry about whether they will be able to resume their life as it was.

“What’s important is that caregivers, family members, community health workers and clinicians listen carefully so they can guide their reaction according to the older person’s lead — what matters to them,” Fulmer said.

Family members also should be persistent about getting in touch with loved ones, she added. “Reach out by phone, text, email,” Fulmer said. “Let them know you are thinking about them and caring about their situation. That will go a long way.” And, she cautioned, “If you can’t communicate with them, you have to be able to understand that everyone is doing the best they can to get things rolling.”

The situation nursing homes faced as the hurricane hit ran the gamut. Some facilities were in mandatory evacuation areas and had to relocate residents and staff members. Others had to weigh the disruption of moving frail residents to other facilities — possibly far away — against the dangers of the impending storm.

The Florida Health Care Association, a trade group for skilled nursing facilities, estimates that 80 of the nearly 700 nursing homes in the state were evacuated.

The most pressing issue now in Florida is how to restore power to millions of people — including nursing homes.

The lack of power may have led to the deaths Wednesday of eight residents of a Hollywood, Fla., nursing home, which lost air conditioning after the storm. Law enforcement and state officials are investigating the deaths.

“The loss of these individuals is a profound tragedy within the larger tragedy of Hurricane Irma,” the Florida Health Care Association said in a statement. “Our centers' first priority is always the safety and well-being of every resident in their care, and they are doing everything in their power to meet their immediate and ongoing needs.”

“We still have 150 nursing centers that don’t have power,” Kristen Knapp, the association's director of communications, said in an interview Wednesday. She said nursing home operators are working with state emergency management and utility officials to get power restored as quickly as possible. She also said centers are working with their medical directors to continually assess residents’ health and ensure that it is safe to keep them in those facilities until the power is restored.

In Texas, nursing homes are beginning to get back to a sense of normalcy, depending on where they are located and how much damage Harvey did.

“There are many facilities that are having to do renovation and reconstruction,’’ Kevin Warren, president of the Texas Health Care Association, told AARP on Wednesday. “They have walls torn up, have to replace nursing stations, equipment, bedding, furniture.”

As in Florida, Texas had to balance the cost of disrupting patients’ lives by evacuating them with the need for safety. “Transfer trauma can be very disorienting,” Warren said. “About 55 percent of [nursing home] residents in Texas have some form of dementia. So you’re already dealing with issues of confusion, and these transitions exacerbate that.”

Adding to the difficulty, Warren said, is that in many cases the families of these residents lost their homes as well and may have fled to someplace far from where their loved one is staying. Facilities are doing their best to keep families updated on where their loved ones are and when — and if — they’ll be able to go back to the nursing home.

“What no one could have prepared for,” Warren said, “was the fact that Harvey got over Houston and stalled and sat and created 50 inches of rain.” Facilities that were high and dry and unaffected by the initial storm ended up getting flooded. Several of them had already taken in residents from facilities that were evacuated. That meant some nursing home residents were relocated twice.

In both states, health officials stepped in to waive red tape that could have stood in the way of getting the best care for displaced residents. They waived licensing requirements for nurses who moved with their patients to other states and relaxed bed-capacity requirements so facilities could bring in cots and mattresses and accept residents from other nursing homes.

Fulmer recalled that in 2006, after Hurricane Katrina, her foundation provided funding to study what happened and develop plans for how to handle such disasters.

Warren and Knapp said they expect there will be lots of discussion about lessons learned and what, if anything, might have been done differently before, during and after Harvey and Irma.

“We haven’t had a chance to stop and reflect,” Knapp said. Right now all the focus is on restoring power and patient safety.