En español | Will Medicare and Medicaid benefits be cautiously trimmed or dramatically sheared by a "super-committee" looking for ways to cut federal spending?

That's the question as the committee, composed of six Republicans and six Democrats, tries to figure out how to slash $1.5 trillion from the national deficit in a new round of negotiations. The group must make its recommendations before Thanksgiving, and Congress is expected to vote on them by Dec. 23. 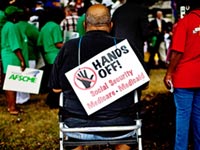 Seniors react to proposed cuts in health and retirement benefits.

Everything's on the table, but here are eight changes to Medicare and Medicaid that the committee is expected to consider:

1. Replace the current Medicare program with a private voucher system.

A proposal to privatize Medicare for everyone currently under age 55 passed the House in April — and failed in the Senate. But Republican leaders have made it clear that the Ryan plan — named after its author, Rep. Paul Ryan of Wisconsin, chairman of the House Budget Committee — is still on the table despite strong popular reaction against it.

The plan would replace Medicare with vouchers to help buy private insurance for people who become eligible for Medicare after 2021. Experts predict that it would shift more costs to beneficiaries — both for younger ones using the vouchers and, ultimately, for older ones who stay in the current Medicare program.

2. Raise the age of eligibility for Medicare.

The super-committee could adopt a proposal from a bipartisan bill recently introduced by Sens. Joe Lieberman (I-Conn.) and Tom Coburn (R-Okla.). This bill — seen by some as a bipartisan model for deficit cutting — would raise the eligibility age from 65 to 67, but only if a provision of the Affordable Care Act goes into effect in 2014. That provision would guarantee Americans who are not old enough for Medicare the opportunity to buy private insurance regardless of health conditions — something they would have to do if the Medicare eligibility age is raised. Most Republicans in Congress have vowed to repeal the health care law.

Raising the eligibility age is estimated to save the government $124 billion over 10 years, but if the health care law is repealed, the burden would fall on people ages 65 to 67 trying to buy insurance and on state Medicaid programs and employers that provide health insurance. If the law is allowed to take effect, federal savings would be partly reduced because more low- and middle-income people would be eligible for government subsidies under the law.

Next: Raising the costs to beneficiaries. >>

3. Raise costs for most beneficiaries.

The federal government currently pays 75 percent of the cost of Medicare Part B, which covers doctors' services and outpatient care, with beneficiaries paying the remaining 25 percent through Part B premiums. Beneficiaries' share could be increased — for example, to 35 percent by 2019 under the bipartisan Lieberman/Coburn proposal, saving the government about $241 billion.

This plan also would change the annual Part B deductible (currently $165) and the Part A deductible for hospital stays (currently $1,132 for each hospital benefit period) into a combined annual deductible of $550. Since the vast majority of Medicare beneficiaries do not become hospitalized every year, this proposal would cost most people more money, but save Medicare an estimated $130 billion over 10 years. The super-committee also could increase copayments for some services so that beneficiaries pay a greater share of the cost.

People with incomes over a certain level already pay higher premiums for Part B services and Part D prescription drug coverage. The super-committee could reduce these income levels so that more people pay the surcharges. Or it could require the wealthiest to pay premiums for Part A (hospital insurance), which has always been premium-free for everyone who has qualified for Medicare.

The Lieberman/Coburn plan raises costs for higher-income people in a different way. It creates an annual out-of-pocket spending limit of $7,500 for most beneficiaries, but wealthier people, depending on their income, would have to pay between $12,500 to $22,500 in deductibles and copays in a year before hitting their out-of-pocket cap.

This proposal has surfaced from time to time in the past. It's based on the idea that the 9 million people who buy private medigap policies to cover their Medicare deductibles and copays are insulated from the true cost of their care and therefore use more services. The Lieberman/Coburn plan would require policyholders to pay the first $550 of their annual out-of-pocket costs and would further limit medigap coverage.

People who qualify for both Medicare and Medicaid — the state-run health program for those with low incomes — represent about 15 percent of people in Medicaid but consume almost 40 percent of its spending. People in this group are generally older and sicker, and many of them live in nursing homes where, once their own financial resources are depleted, Medicaid pays the bill.

Federal funding for Medicaid could be slashed, or the states could be allowed more leeway to reduce their own spending by raising the bar for eligibility and cutting payments to nursing homes. A bill to provide this kind of flexibility to states, introduced by Sen. Orrin Hatch (R-Utah) and Rep. Phil Gingrey, M.D., (R-Ga.) is estimated to save $2.1 billion in federal funds over 10 years.

Doctors are already under threat of a nearly 30 percent cut in reimbursements from Medicare under a law that was passed in 1997, but these cuts have been staved off by Congress every year in short-term "doc fixes." If the super-committee fails to act, another 2 percent cut to Medicare provider payments would automatically take effect in 2013. The committee could recommend further cuts in provider payments — for hospitals as well as physicians — but much would depend on whether it uses an ax or a scalpel, analysts say.

The American Medical Association and other medical groups warn that across-the-board cuts would result in more doctors refusing to accept Medicare patients and add to an already critical shortage of primary care physicians, especially in rural areas.

Leading Democrats have long pressed for the federal government to negotiate prices for Medicare's Part D prescription drug program to lower costs. Currently, it's up to the individual private drug plans to negotiate prices, and they have far less bargaining clout. Republican lawmakers oppose direct government negotiation as interference in the open market, and specifically prohibited it when they designed the Part D benefit in 2003.

Democrats also have proposed requiring drug manufacturers to offer rebates to the government for drugs used by Part D enrollees who are eligible for both Medicare and Medicaid — just as the companies have long provided rebates in the Medicaid program itself — at an estimated saving of $50 billion over 10 years. Both approaches remain politically contentious, and the drug industry would mount massive lobbying efforts against them.