Medicare fraud is alive and thriving, and one of the latest examples involves a Maryland podiatrist who pleaded guilty in July to bilking the federal health care program of more than $1 million. 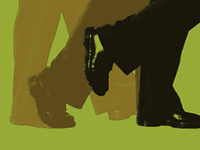 A podiatrist swindles more than $1 million in claims to Medicare Advantage for patients he didn't treat.

Larry Bernhard, 55, faces at least two years in jail and repayment of the stolen funds after admitting he turned in fraudulent invoices to providers from his practice in Gambrills, Md. According to the U.S. Attorney's Office in Maryland, Bernhard "flagrantly ripped off" Medicare Advantage, which is offered through private health insurers but regulated by the federal government.

"This was a pretty egregious example for it to reach a criminal charge," says Marcia Murphy, a press officer in the U.S. Attorney's Office. "He was even billing for [foot care] services on a double amputee."

According to the plea agreement, the fraudulent submissions were from October 2007 to July 2010.

Slipped through the system

Ironically, Bernhard had already been banned from participating in federal health care programs after accusations that, from April 2002 through October 2004, he submitted claims for patients at nursing facilities when the patients were actually in the hospital. His name was added to the Department of Health and Human Services' list of banned providers in 2007, yet somehow Bernhard's claims were approved.

"There are many faults within the system," says Malcolm Sparrow, a professor at Harvard University's Kennedy School of Government and author of License to Steal: How Fraud Bleeds America's Health Care System.

"You'd imagine that if they identified a person and tagged him for exclusion, they would have some way that would not allow him back into the system," Sparrow says. "It's very distressing."

Sparrow says it's difficult to determine just how much money is lost to fraud in federal health care programs — pointing out that while Bernhard was caught, his scam was somewhat ordinary.

"If it's easy for one individual to steal a million dollars, you have to wonder where the real threats are to Medicare funding. There are highly sophisticated organized frauds and coordinating scams," he says. "Nobody knows how much is being lost."

A spokesperson for the Centers for Medicare & Medicaid Services, which oversees Medicare Advantage, says CMS's role is not to investigate and that the private insurers who offer Medicare Advantage should at least check a provider's name against the federal government's banned list.

Meanwhile, Bernhard's attorney, Joseph Evans, says his client was not billing the federal government but private medical insurers. Bernhard told investigators that he faked billings to meet his financial obligations. He is scheduled for sentencing Nov. 21.