Results from three large-scale studies — including one study presented last weekend at the Alzheimer’s Association 2010 International Conference in Hawaii — add to the evidence that drinking moderate amounts of coffee and tea may be good for your health. 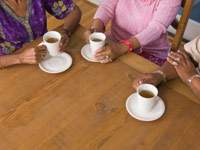 Moderate amounts of coffee and tea may be good for your health.

More than 4,800 men and women age 65 and older who participated in a heart study funded by the National Institutes of Health were followed for up to 14 years and given a standard mental assessment test annually. The mental and memory faculties of those who regularly drank tea declined about a third less than the faculties of non-tea drinkers, researchers reported at the conference.

“We can’t attribute the effect to caffeine because we didn’t see it in coffee drinkers as well,” says Lenore Arab, professor at UCLA, and lead author of the study. (Tea has less than half the amount of caffeine of coffee.) “At the highest level of coffee drinking, the magnitude of the effect was less than with even a weak tea drinker,” she says. The study that looked at the NIH research and analyzed the coffee and tea data was funded by the Lipton Institute of Tea.

Researchers at the University Medical Center in Utrecht in the Netherlands followed the coffee- and tea-drinking habits of more than 37,514 Dutch people for 13 years. The findings: People who drank two to four cups of coffee a day had a 20 percent lower risk of heart disease when compared with either those who drank less than two cups a day or those who drank more than four.

Tea provides even greater benefits. Those who drank more than six cups of tea daily had a 36 percent lower risk of heart disease compared with those who drank less than one cup. And drinking three to six cups a day reduced the risk of dying from heart disease by 45 percent.

The results don’t mean, however, that people should go out and gulp cup after cup of coffee or tea, warns Yvonne T. van der Schouw, professor of chronic disease epidemiology at the University Medical Center and lead author.

Next: Does coffee help protect against cancer? >>

“The main message is that people who drink coffee and tea do not have to worry that it increases the danger of cardiovascular illnesses,” she says. And, she says, moderate consumption might even protect against coronary heart disease.

The results were published online June 18 in Arteriosclerosis, Thrombosis and Vascular Biology.

In a separate report, an international team of researchers looked at the findings from nine earlier studies conducted in Europe, North America and Puerto Rico. Those studies involved 3,900 people with cancers of the mouth cavity and the pharynx and a control group of 9,000 other people without those cancers. Researchers then asked all of them about how much coffee and tea they drank.

The study found that the risk of developing these cancers was 12 percent lower for men and women who drank coffee compared with those who didn’t.

Those who drank more than four cups of coffee a day had a 39 percent lower risk, says lead researcher Mia Hashibe, an assistant professor in the Department of Family and Preventive Medicine at the University of Utah in Salt Lake City. But she, too, cautions against drinking coffee just based on these results.

“Individuals metabolize coffee differently, so they shouldn’t take this as a general suggestion at this point,” she says. “ But it’s an interesting finding that we hope will be followed up in other studies.”

The researchers did not see any association between tea drinking and a lower risk for these cancers.

“There is increasing evidence that moderate coffee or tea consumption [two to six cups a day] is not harmful for health and may have slight benefits,” says Frank Hu, M.D., professor of nutrition and epidemiology at the Harvard School of Public Health.

Coffee and tea “can be included as part of healthy diet and lifestyle,” he says. “However, don’t expect tea or coffee will have large effects on heart disease or cancer prevention or cognitive decline, as the evidence is still preliminary.”

Cathie Gandel is a freelance writer based in Bridgehampton, N.Y.