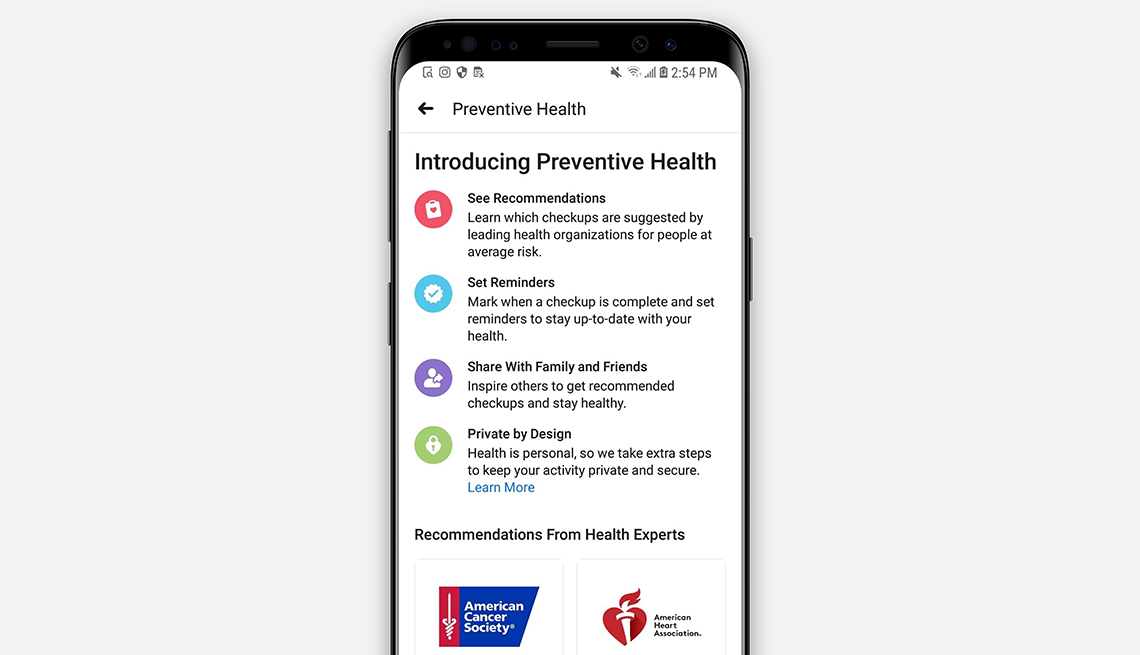 If you’ve logged into Facebook recently, you may have noticed something new: In addition to notifying you every time a friend messages or comments on your photos, the social media platform can now alert you when it’s time to check your blood pressure or schedule a mammogram.

The new tool, called Preventive Health, was launched to help reach the millions of Americans who miss out on the kind of annual physicals and routine tests that help catch common conditions underlying the two leading causes of death in the U.S. — heart disease and cancer.

When a Facebook user pulls up Preventive Health (find it by typing “Preventive Health” in the search bar of the mobile app), the tool recommends tests, screenings and medical appointments tailored to the user’s age and gender. A 70-year-old man, for example, is prompted to get a blood pressure test and a stool blood test once a year; a 50-year-old woman is advised to have a mammogram. An annual flu shot and regular cholesterol test are recommended for both.

“If somebody checks Facebook in the morning and they’re scrolling through their usual news feed and seeing what’s going on, they might get a reminder about doing things to improve their health,” says Andrew Freeman, a Denver-based cardiologist with the American College of Cardiology, which worked with Facebook on the new tool. 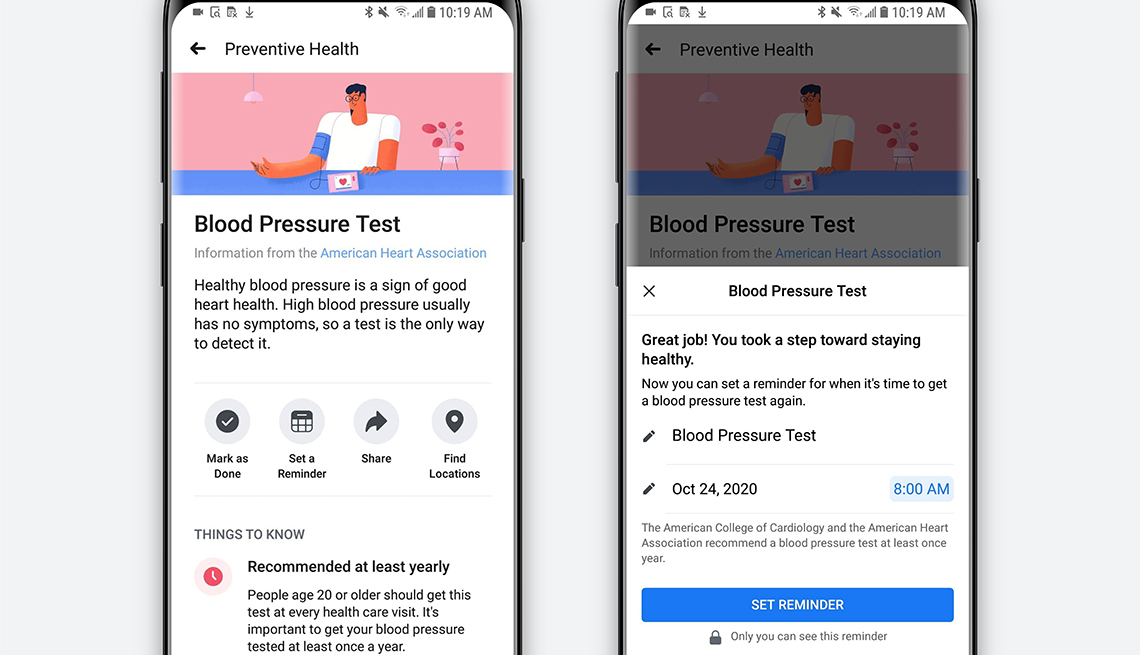 With each health tip, the user has the option to set a reminder to schedule screening appointments or read more about what’s being recommended (all of the information is from leading public health organizations). If location services are turned on, the tool also connects users to nearby federally qualified health centers, where they can access affordable preventive care if they don’t have insurance.

The concept is simple, but it could be lifesaving, experts say. About half of cancer cases and deaths from cancer can be prevented through lifestyle modifications and early detection from screenings, says Richard Wender, chief cancer control officer at the American Cancer Society, which also worked with Facebook on the tool. Lack of access to affordable health care is one obstacle that prevents patients from getting the preventive services they need. Health education is another.

Sixty-nine percent of Americans ages 50 to 64 and 40 percent of those 65 and older regularly use social media, according to the Pew Research Center. Wender says the ability to share vital health information with so many adults in one place is “unlike any online outreach that any one of our organizations could possibly achieve alone.” (The Centers for Disease Control and Prevention and the American Heart Association also worked with Facebook on the tool’s recommended screenings.)

“We’re not so naive to think that this tool alone will overcome all the barriers we see,” but it’s an “easy way for people to get information using a social media platform that they use every day and that they’re familiar with and comfortable with,” Wender adds. And it just might be the push they need to act.

Protecting personal data has been an issue for Facebook. But the company is telling users they have nothing to worry about with its new Preventive Health tool. Activity and information within the tool will not be posted publicly or shared with others, Facebook says in a statement. The company also says it won’t have access to a user’s test results and will not share personal information about user activity with third parties.

In its current form, privacy expert Jennifer King doesn’t see many red flags that should worry Facebook users. “The hesitation I have is: Where do they go with it?” says King, the director of consumer privacy at the Center for Internet and Society at Stanford Law School.

Freddy Abnousi, head of health care research at Facebook, tells AARP that “regardless of the evolution of the tool,” Facebook is “committed to continuing to protect user privacy.” He says the company “took extra steps to protect user privacy and collect a limited amount of information necessary to make the tool function and improve it over time.”

To ensure both privacy and safety, King recommends vetting any of the “nearby” health clinics before making an appointment. She also recommends users stay on top of their privacy settings if they’re concerned. “That could mean you have to set a reminder for the reminder,” King says.

Freeman hopes Facebook’s new Preventive Health tool serves as a “pause point” for users, where they can become more aware of their everyday behaviors and work to improve their health.

“There’s so much noise from so many sources that a lot of people have sort of, you know, ignored it,” Freeman says. “We’re hoping that it just amplifies the message in a newer platform and a newer method of reaching people.”