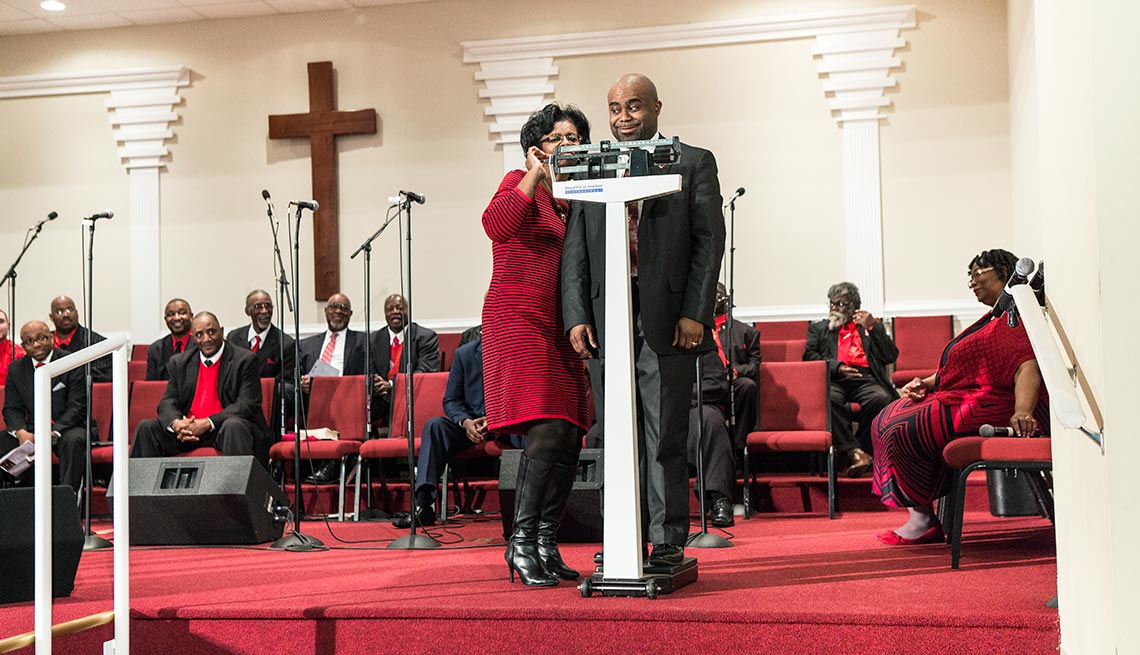 After 13 years as the pastor of Long Branch Baptist Church in Greenville, S.C., the Rev. Sean Dogan, a short, stocky man with a sculpted goatee, had given over 400 eulogies for his parishioners, most of whom had died from heart disease, diabetes, obesity or stroke. And after each funeral he'd sat down with friends and families of the deceased to a meal of fried chicken, mac and cheese, and collard greens boiled in fatback.

Then one day five years ago, Dogan had a revelation: It was the food that was killing his people. So on a bright Sunday morning, he stepped up to the altar with a small scale, and for all to witness, the reverend weighed himself.

It was high drama at Long Branch, but Dogan wanted to make a point: Like many in his congregation, he was overweight. The time for change, he declared with fire-and-brimstone urgency, had come.

With that passionate appeal, Dogan joined scores of African American ministers around the country who, from their powerful perches, have been making the health of their congregants a priority. And for good reason: Nationally, nearly 48 percent of African Americans suffer from obesity, compared with 33 percent of whites. And many are at the highest risk for diabetes, heart disease and a host of other obesity-related ailments.

Perhaps nowhere are these problems more evident than the rural South, where poverty and illiteracy have conspired to worsen matters. South Carolina, for example, has the tenth highest rate of obesity in the country, and ranks fourth for diabetes.

Now with the help of a burgeoning number of private and public "get healthy" initiatives and grants — or, in the case of churches like Long Branch, a simple good idea — many ministers are trying to turn this tide. And they're enlisting community foot soldiers to give them a hand.

Just 85 miles southeast of Greenville in the predominantly black mill town of Chester, S.C., Delores "Dee" Fedrick counts herself one of those soldiers. A pharmacist by training, Fedrick decided to give back to the community after retirement by teaching literacy classes to unemployed workers. She quickly realized that most of her students had health problems, and that those problems were related not just to illiteracy, but to diet, too. Her students couldn't read the doctors' instructions on their medicines, or nutritional labels on food packages, and they were making poor food choices, in large part because of cultural traditions.

So in 2010 she morphed her literacy program into a grant-based health-literacy program called "Eat for Life," developed at Emory University, and began preaching her message in African American churches. "The best way to reach blacks is in their churches," says Fedrick, a determined woman who grew up in segregation. "Our churches brought us out of slavery. Then during integration in the '60s, we strategized for freedom in our churches. It was our sanctuary." One of the churches that caught Fedrick's eye: Metropolitan AME Zion. 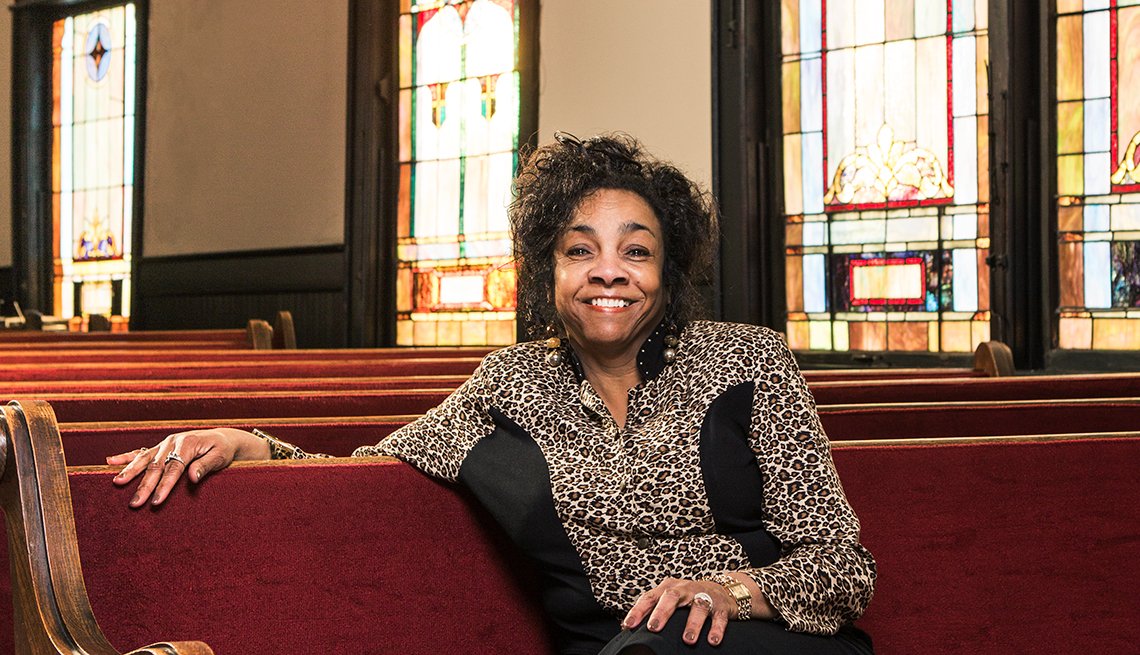 A revelation in church

Fedrick, making her rounds through Chester, stops her green SUV in front of the impressive red brick church and marvels at how the minister there, the Rev. Angela Boyd, kick-started a "get healthy" approach. Boyd had urged her congregation to try a Bible-based "Daniel fast" — "no animal fat, only water, fruits and vegetables for 40 days." When Fedrick got wind of that, she asked the minister to let her conduct nutrition classes there. Boyd agreed, because "Dee's scientific way of teaching good health was knowledge you can apply on your own."

Fedrick understood the cultural and social challenges. She grew up in the South of 50 years ago, with "colored" water fountains and restrooms. White boys harassed her on the way to school. Now men in their 60s, "they're always telling me how much they like me," said Dee. "They don't remember."

While some things changed, Fedrick knew, some remained the same. Like food. The meals Fedrick's mother cooked were typically Southern, but with healthy variations atypical for many families in the mill towns near her home in Columbia. Her mom's rules: water, no Kool-Aid, lots of fruits and vegetables, no sweet desserts. Which was why Fedrick preferred the tastier meals her grandmother cooked — "fried apple pies and fried chicken and collards in fatback.

"Fatback was our culture," Fedrick explains. "One piece had 200 calories from fat. Three pieces contained 100 percent of a day's limit of fat. We'd eat four and five pieces a sitting."

For Fedrick, who went on to graduate from the University of South Carolina and work for pharmaceutical companies, that way of eating is part of the tradition she's now intent on reining in. One Sunday while playing the piano in church, "I had this revelation," Fedrick says. "Wow! I thought. People go to a pastor to pray [to help them beat] their diabetes. They went to me as a pharmacist to dispense medicine. I was reactive. Why couldn't I be proactive? Help people avoid illnesses before they start."

Sean Dogan's church in Greenville is surrounded by sagging shotgun houses and the laughter of men sitting around front porches on a cool, sunny afternoon. Often, after services, the pastor leads some of his parishioners in a vigorous walk around the community.

The purpose, he says, is to remind them that their bodies are temples of the Lord. "I use scriptures during services," Dogan says, "to make that point." In 1 Corinthians 3:16-17: "Do you not know that you are the temple of God and that the spirit of God dwells in you? If anyone defiles the temple of God, God will destroy him." Of the 1,200 members of the church, nearly a third participate in some wellness activities, he said.

On this day, Dogan is sitting with some of the congregants who participated in a program created by LiveWell Greenville, a citywide organization that he chairs. He called it "100 days of faith, fitness and fellowship" — and its message was simple: Physical activity of the most elemental kind, like walking and a modest diet of fruits and vegetables, can improve your health. To spark enthusiasm, he started a monthly farmers market that has developed into a mobile market, thanks to a local farm.

But even Dogan concedes it was hard to keep everybody motivated. Faced with money and housing woes, says Connie Burgess, many still found that "their food was their comfort." It didn't help, says Connie Terrell, that "there's a McDonald's on every corner, and no grocery store, and some people don't have cars." But many found their way around the roadblocks. Burgess changed her cooking habits. "I didn't tell my husband," she confesses. Linda Nance adds, "I told my husband if he doesn't eat what I cook, he doesn't eat." All the women laugh.

And the difference for many was life-changing. "At one time I couldn't walk or use my hands," Burgess says. "Our pastor taught us there was more to life than the way we had been living."

Back in Chester, Fedrick is sitting in an Italian restaurant, chatting about why her Eat for Life courses struck such a chord. "I held discussions throughout the community first," she says. "Focus groups of movers and shakers." Her classes swelled to nearly 60 people, mostly women.

First, she taught moderation. She assured students they could still cook with fatback, but not as often. She urged them to eat smaller portions. She taught them federal guidelines for sugar intake (six teaspoons a day), cholesterol (300 milligrams a day), and for salt, calories and protein. And with a book she wrote, The Complete Guide to Developing Nutritional Skills, she lectured about everything from how to measure your meat to how to cut the fat content in meals to under 65 grams.

"My goal was to give knowledge," says Fedrick. "What they did with it was up to them." During her classes Fedrick's students brought in tasty foods cooked without salt, fatback or sugar. Steamed broccoli with spices. Spaghetti squash as a substitute for pasta.

At the end of her courses, she held an awards night. The woman who lost the most weight received a $100 prize, and to that, the Rev. Angela Boyd and everybody in the room were inspired to shout "Praise the Lord!"

Looking back at her work at Metropolitan, Fedrick admits that change was not easy. But it happened. "Thirty percent [of participants] lost weight," she says proudly. "One hundred percent were cutting back on portions. They had more energy. Their doctors' results were better.

"That was my goal. To leave someplace better than I found it."

Reaching out to parishioners about their diets is part of a nationwide movement to use faith-based initiatives to improve health. These programs help congregants with health issues in a number of areas, according to an analysis published in the American Journal of Public Health. A few examples: