En español | You can't change your genes, but if you have a common genetic trait that increases your risk of heart disease, you can eliminate that extra risk by eating a diet high in raw vegetables, fruits and berries, according to a recent study.

Researchers say the link between genes and diet provides an important new clue about why healthy eating is key to preventing heart disease. 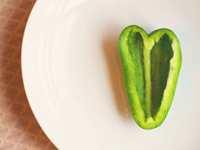 "The effects of diet on heart attack has been well known for a long time, but the actual mechanism of how a good diet can actually lower your susceptibility to these diseases is not well understood," says James C. Engert, a genetic epidemiologist at McGill University in Montreal who helped lead the study.

The study focused on a genetic variant linked to a tendency to develop heart disease. People with two copies of these DNA variations have twice the risk of heart disease as people who lack them entirely, Engert explains.

When the scientists examined records of 3,820 people who had suffered nonfatal heart attacks between 1999 and 2003 and matched them with 4,294 healthy people, they found those who reported the healthiest diets were about half as likely to suffer heart disease as those on a high-fat, carbohydrate-rich "Western" diet, even when they had the dangerous DNA pattern, Engert says.

The researchers also looked at a study of more than 19,000 Finnish patients, about 1,000 of whom suffered heart attacks, and found strikingly similar results, Engert says. "The consistency of the result is really the take-home message," he says.

The study supports the diet advice doctors have been giving patients for years.

Many patients with a family history of heart disease adopt a fatalistic attitude and assume there's nothing they can do about it, says Lori Mosca, M.D., director of preventive cardiology at New York-Presbyterian Hospital. But that family history can be modified by a healthy diet and behaviors, she stresses.

Engert says scientists still don't know exactly how the healthy diet affects the genes, but "the fact that we've been able to put these things in the same bin should help other researchers connect the dots."

One possible weakness of the study is that it was based on patients' descriptions of their diets, which may be inaccurate, Engert says.

"What I find really important about this information is that it reinforces that our destiny is not just determined by our genes," Mosca says. "Even if we're dealt a bad genetic risk for cardiovascular disease, we can still modify that landscape by making better choices in our diet."

Also of interest: Eat for a healthy heart. >>