En español | Whipping up a cool, creamy smoothie in your trusty blender — remember when we used to do that way back in the good ol' days, like the 1990s?

Lately, though, smoothies are being passed over for the latest beverage craze — juices and juice fasts. The idea is to drink nothing but juice extracted from fresh fruit and vegetable juice for several days to "cleanse" your digestive system and maybe drop a few pounds in the process. 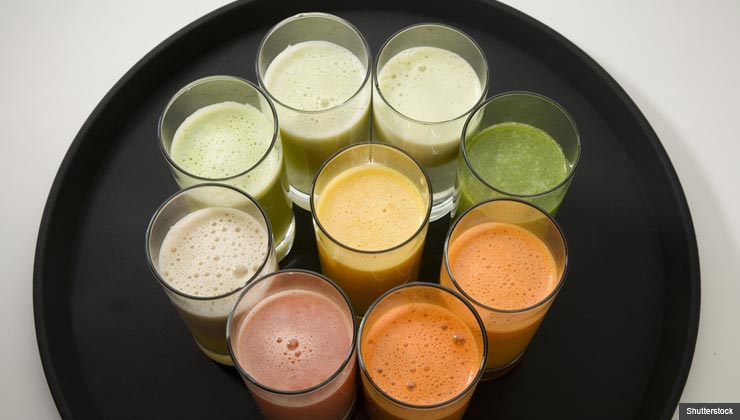 Both juicing and blending can be an effective way of getting more fruits and veggies into your diets.

Celebs, such as Gwyneth Paltrow, are touting them. Even the 70-year-old food critic for Vogue magazine, Jeffrey Steingarten, tried an eight-day cleanse to see whether it could help him recover from an intestinal bug.

Writing about his experience in the May issue of the magazine, he admitted he thought about food "every few minutes — nearly all day." He also found it hard to focus, to write or to even stand up by the eighth day.

But is drinking freshly extracted juice really better for you than our old standby, the smoothie?

The answer, as with everything else, is — it depends.

Here's the funny thing: This seemingly new fad is just the latest rendition of an 80-year-old idea.

The whole concept of extracting nutrient-packed juice from fruits and veggies to keep us looking young and feeling healthy dates back, not to the early 2000s, but to the 1930s, when doctor and raw food proponent Norman Walker came up with the hydraulic Norman Juicing Press.

That was followed in the 1950s by the first modern juicer — the Champion Juicer. Still sold today, it's a hefty gadget, one that Ohio caterer Scott Groth, who blogs for The Chubby Cook, says "is heavy enough to put in the back of your pickup truck in winter to avoid sliding off the road."

Then in the 1970s, everyone's favorite fitness fanatic, Jack LaLanne, sparked another juicing mania with his Jack LaLanne Power Juicer, which he pitched relentlessly on TV.

Why does juicing keep resurfacing?

One major reason undoubtedly is that anything that helps us eat more fruits and vegetables is a good thing, especially for older Americans. Studies have shown these foods help improve heart health and reduce the risk of cancer and dementia.

And, by all accounts, we need a little encouragement to eat our veggies. In 2010, the government reported that barely a third of Americans eat two servings of fruit daily and only about a quarter of us eat three servings a day of vegetables — although older Americans do a much better job at it than do younger ones.

Both juicing and blending can be an effective way of adding more produce into our diets. The difference between the two basically comes down to fiber. A smoothie, because it's made by pulverizing whole pieces of fruit, offers fiber plus vitamins and other nutrients. Juicing, on the other hand, strains out the insoluble fiber — the (sometimes bitter) skin, seeds and stems — leaving only the nutrient-rich juice.

New Orleans registered dietitian Molly Kimball spells out the pros and cons of juicing versus blending this way:

As for whether you should try a juice cleanse, most experts urge caution, especially for people with chronic health conditions.

Sylvester explained that for diabetics, a juice fast could send blood sugar levels soaring. And kidney disease patients who consume higher-than normal amounts of produce risk dangerous side effects from elevated levels of potassium and other minerals.

With the renewed popularity of juicing has come lots of choices for buying a juicer, from a basic model for under $100, to the Cadillac of juicers, the Vitamix, which can cost up to $650.The term "juicer" seems to be a catch-all phrase for everything from basic citrus juicers to the more powerful juice extractors, which are better for juicing denser, fibrous fruits and vegetables. Juice extractors cost more, but are more versatile. They also have more parts to clean. When choosing a model, consider whether it has a large enough tube to accommodate large pieces and whether the parts are dishwasher-safe for convenient cleaning. Consumer Reports recently rated 11 juicers (although not the Vitamix) and rated the Hamilton Beach Big Mouth Pro 67650 ($80) a "Best Buy." They also gave top marks to the Juiceman Pro JM503 and the West Bend Performance 7010.

Plus, it's questionable whether our bodies even need to be "cleansed" through liquid-only fasting.

Adrienne Youdim, M.D., medical director of the Weight Loss Center at Cedars-Sinai Medical Center in Los Angeles, explained that the body naturally removes toxins via the liver and kidneys.

"There really isn't any reputable science to suggest that there is any health benefit" to cleanses, she told the Los Angeles Times.

However, if you — or someone you're caring for — dislike the taste or texture of many cooked fruits and veggies or find fresh produce difficult to chew, juices and smoothies can be a good addition to your diet.

It's always a good idea to consult your doctor before starting any new dietary regimen.

Pressed as to which she'd choose, juice or smoothie, dietitian Kimball gives a slight edge to smoothies, especially those made with low-fat yogurt. Unlike juice alone, smoothies, she says, ultimately will keep you more satisfied with "a combination of produce, fiber, protein and healthful fats."

Go to the AARP home page for tips on keeping healthy and sharp, and great deals.