Looking for volunteer opportunities? Whatever your skill set, there’s a role for you with AARP Foundation Tax-Aide.

Here's another reason to look forward to turning 80 — you may start sleeping better than you did at any other point in your life.

Surprised? So were the authors of a recent myth-busting study that found that the older you are, the better you sleep.

If you're losing zzz's, there may be an underlying medical problem. — Photo by Corbis 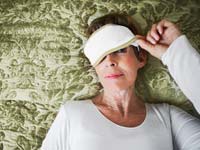 In the world's largest study of sleep quality and health, reported in the journal Sleep, researchers analyzed survey results from nearly 156,000 adults ages 18 and older. Healthy older people reported fewer sleep disturbances and less daytime fatigue than younger people — and those in their 80s sometimes had the fewest complaints of all. "Older people without illness or depression should not have trouble sleeping," says psychologist and lead author Michael Grandner of the Center for Sleep and Circadian Neurobiology at the University of Pennsylvania's Perelman School of Medicine. "If they do, they may want to see a sleep specialist." Sleep disturbances may be a symptom of underlying illness and should not be ignored.

The study was the first to compare sleep problems across age groups. Researchers asked participants how often in the past two weeks they had felt tired, slept too much or had trouble falling asleep or staying asleep. Young men, ages 18 to 24, complained the most about sleep difficulties and daytime tiredness, while middle-aged adults reported a slight bump in sleep difficulties and fatigue.

Women's sleep problems peaked during child-bearing and midlife years — no surprise to super-moms and women in menopause. But after age 60, they felt better rested than they'd ever felt before.

"We expected to confirm that sleep difficulty increases with age, as some other studies have shown," Grandner says. But while previous studies only focused on sleep disorders such as insomnia or sleep apnea, this study looked at sleep and related daytime difficulties in general. Healthy older adults may be more satisfied with sleep because they have more flexible schedules and less lifestyle stress, such as child-rearing and workplace problems, Grandner says. "Or it could be that the current older generation is more stoic and less likely to complain than their younger counterparts."

Still, older adults often take sleep difficulties for granted and may not mention them to their doctors, says Michael Twery, director of the federal government's National Center on Sleep Disorders Research. "That's a mistake," he says. "Poor sleep may be a red flag for potentially critical medical conditions."

He suggests a sleep diary — noting sleep duration, nightly awakenings, number of daily naps — if you're not sleeping well. "There's no blood test" for poor sleep, he adds, "so it's up to you to give the doctor detailed information about how sleep is affecting your health."