Legal analysts predict that the Supreme Court will take up the health care law this fall and rule by June. Then, finally, it will be clear whether the "individual mandate," the provision that requires nearly every American to buy health insurance by 2014 or face a tax penalty, is constitutional. 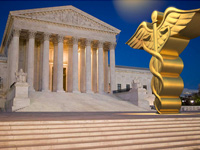 The Supreme Court may or may not rule on the health care law.

"It is wild — and it's not something anyone saw coming," says law professor Kevin C. Walsh at the University of Richmond, a former clerk for U.S. Supreme Court Justice Antonin Scalia.

If the Supreme Court agrees with the latest analysis of the 4th U.S. Circuit Court of Appeals in Richmond, Va., it could avoid ruling on the mandate until well after 2014, Walsh and other legal scholars say.

The future of the law is of particular concern to people 50 to 64 who have lost their jobs and health insurance in the economic downturn and stand to receive coverage under the law, which also expands eligibility for Medicaid.

Five federal appellate courts have issued contradictory decisions. The 6th U.S. Circuit Court in Cincinnati upheld the entire law, while the 11th U.S. Circuit in Atlanta found the individual mandate unconstitutional but let the rest of the law stand. Three other courts, including the 4th Circuit, dismissed cases on jurisdictional grounds.

Jurisdictional decisions typically gain scant attention because the courts stop short of ruling on substance. But when the 4th Circuit in Richmond on Sept. 8 threw out two suits challenging the law, judicial tea-leaf readers were intrigued. Two of the three judges also volunteered that they would have found the law constitutional.

In Liberty University v. Geithner, the judges ruled that the university could not challenge the mandate's tax penalty because the tax hasn't yet taken effect. The court cited an obscure 19th-century law that prohibits judges from ruling on tax challenges before a tax has been collected.

One issue is whether the penalty for not buying health insurance is a tax. While Congress debated the bill, the Obama administration argued the penalty is not a tax, although the IRS would collect it. In the courts, government lawyers have argued it is a tax, which Congress has the right to levy.

Another issue is whether the 19th-century law applies. Government lawyers have flip-flopped, first arguing that it did and then that it didn't.

In the second decision last week, the case of Virginia v. Sebelius, the 4th Circuit ruled that the state lacked standing to challenge the mandate because the state is not subject to it and lacks "a personal stake." Virginia Attorney General Ken Cuccinelli II has said he will appeal to the Supreme Court.

"We've now seen a federal appellate court rule that no federal court has jurisdiction" to decide the substance of the cases, Walsh says. "The upshot could be to delay the ultimate decision on the constitutionality of the mandate."

All this raises new points for the highest court.

"Suppose the Supreme Court finds that the 4th Circuit was right in both decisions," says Walsh, who wrote a friend-of-the-court brief urging dismissal of the Virginia lawsuit.

Brad Joondeph, a law professor at Santa Clara University, says that the Supreme Court could decide it lacks jurisdiction until a taxpayer is assessed the tax penalty, pays it and then sues the government for a refund. The court might not rule on the mandate until 2015 or 2016, he wrote in the ACA Litigation Blog.

And that would be another intriguing twist in this fascinating legal drama.