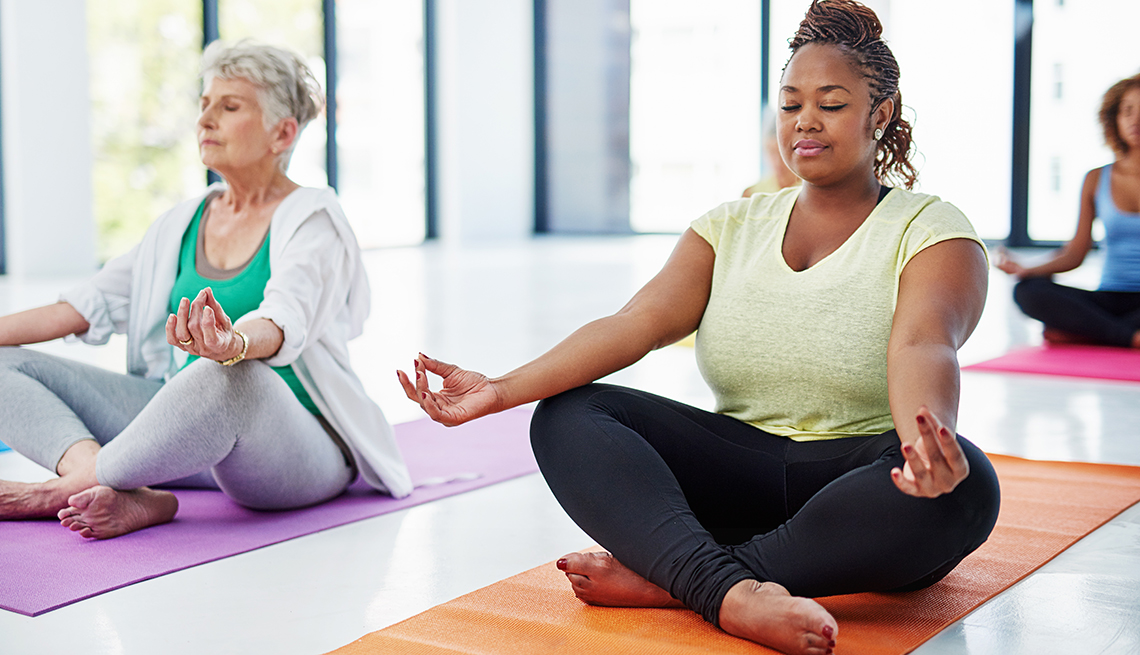 Yoga is great for all ages and fitness levels.

En español | Have you resolved to exercise and get healthier in the new year?  Health and medical experts say you might want to try yoga.

This ancient healing practice has become increasingly popular in our modern, stressful world as a powerful way to stretch and strengthen the body, relax and calm the mild, enhance energy and lift the spirit.

In fact, a 2016 survey by Ipsos Public affairs shows that more than 36 million Americans now practice yoga, up from 20.4 million in 2012.  And 34 percent of Americans—or more than 80 million people—said they were likely to practice yoga over the next year.

Doctors are increasingly recommending yoga to people over 50 because it can help lower blood pressure, ease pain and improve balance.  But people tend to stick with the practice because they find it also improves their mood, relieves stress and, simply put, makes them feel happier.

Unfortunately, many yoga instructors are not trained to adapt the practice to older bodies. And America's booming interest in yoga has lead to an increase in classes that are called yoga, but are actually "yoga-flavored" exercise classes taught by instructors whose yoga training may be limited to a weekend workshop.

Unless a yoga teacher creates a safe class designed for older adults, this practice meant to heal may cause harm. To safely reap the many benefits of yoga, it's important to understand these seven essential yoga facts:

1. Yoga can be good medicine. When new students come to my yoga class, I typically ask them what they're seeking from the practice. "Flexibility" and "stress reduction" were once the most common answers, since most people associate yoga with stretching and relaxation. But that's changed in recent years, as a growing body of scientific evidence demonstrates that yoga can have numerous physical and psychological benefits, including boosting cardiovascular health, relieving anxiety and depression, enhancing functional fitness and easing back pain.  Studies are examining yoga’s therapeutic effects on a broad array of ailments, including heart failure, arthritis, chronic pain, cancer and Parkinson’s disease. Yoga even appears good for the brain.  Studies examining yoga to prevent or slow the progression of Alzheimer’s disease showed that a 12-minute yoga meditation exercise improved cognition and memory in people with mild cognitive impairment. Now, more and more students tell me yoga is just what their doctor ordered.

Yoga is a system of holistic health and spiritual growth that originated several thousand years ago in India. In the West, the word "yoga" is commonly used to refer to hatha yoga, one branch of this ancient discipline that focuses on physical postures, breathing exercises and meditation. Hatha yoga teaches you how to relax and release tension, as well as how to strengthen weak muscles and stretch tight ones. It also helps balance and integrate mind, body and spirit.

2. Yoga is not just for the fit and flexible. Saying that you're not flexible enough to practice yoga is like thinking that your house is too messy to hire a maid. The idea that you must twist yourself into a pretzel to do yoga is one of many common misconceptions. I've taught yoga to people with a wide array of health conditions including heart failure, cancer, osteoporosis, arthritis, fibromyalgia and back pain. The only requirement for practicing yoga is the ability to breathe.

3. You don't have to stand on your head. While some people over 50 are extremely healthy and able to do headstands and other challenging yoga postures, much more common are older adults who fit the profile of the "average" senior in America — 80 percent of whom have at least one chronic health condition and 50 percent of whom have at least two. Many also face other health challenges, such as artificial joints or prosthetic heart valves. That's why it's essential for older adults beginning yoga to find an appropriate class with an experienced and well-qualified instructor.

4. There are many styles of yoga — from "hot" to gentle. For example, ashtanga yoga is very athletic, while kripalu yoga tends to be gentler and viniyoga is generally done one-on-one in a therapeutic setting. If you attend a class that is too demanding for your specific level of fitness, you may risk injury. Be sure you're in a class that is appropriate for you, and inform the teacher of any health concerns or challenges you face. (See "How to Find a Good Yoga Instructor.") Older adults, particularly those who have been inactive, should look for a class called Gentle Yoga or one specifically geared to seniors.

5. Yoga should not hurt. The yogic approach is very different from the Western exercise mentality of "go for the burn." Ancient texts on yoga say that a posture should be "steady and comfortable" or, according to some translations, "relaxed and stable" or "sweet and calm." So if you're straining to push yourself into a posture suitable for a magazine cover, that's gymnastics or calisthenics but not yoga. Yoga invites you to move into each posture only to the point where you feel a sensation of pleasant stretch, then allow your breath to help the pose deepen and unfold.  If it hurts — back off!

6. Yoga is not just a workout. Yoga is a powerful form of mind-body medicine that approaches health in a holistic manner, recognizing that physical ailments also have emotional and spiritual components. In one recent small study researchers at Boston University School of Medicine found yoga was better than walking to improve people's moods. The tools of yoga are postures, breathing practices and meditation, which work together to balance and integrate mind, body and spirit.  One of yoga’s most basic skills is learning to pause and take an easy breath, which can be one of the most healing practices of all.  (Download a free guided relaxation breathing practice, the Six Minute Stress Reducer.)

7. Ask for help for a smooth start. Consult your doctor for specific recommendations — especially if you have heart disease or any chronic health condition, if you've had surgery or are taking medications. Tell your doctor that you're planning to take yoga and ask for guidance, particularly about any specific movements or positions you should avoid. People with osteoporosis, for example should usually avoid certain movements that can cause fracture — including bending forward from the waist and twisting the spine to a point of strain -- movements commonly done in certain postures taught in many yoga classes.
Responsible yoga teachers will ask you about your health and, in some cases, may seek your permission to work with your physician to create a yoga practice tailored for you.