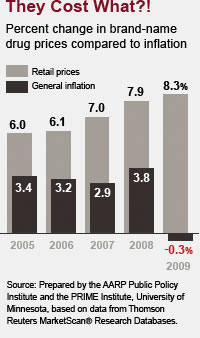 Price increases for these popular drugs over past five years:

Fosamax (70 mg): increased about 20 percent, even with introduction of a generic equivalent in 2008

By the end of 2009, for patients taking a brand-name drug for a year for a chronic condition, the average retail cost was $626 higher than five years earlier. For a patient taking three brand-name medications, this translates into a yearly average increase of $1,878.

En español | Retail prices for some of the most widely used brand-name prescription drugs shot up more than 8 percent in 2009, even as inflation plummeted to a record low, according to a new AARP analysis of retail drug price trends released today.

The AARP Rx Price Watch Report also looked at retail drug prices over the past five years and found some huge increases for popular drugs including the prostate drug Flomax, which nearly doubled in price; Advair and Aricept saw price hikes of 40 percent. During the same period, the consumer price index rose 13.3 percent. The findings show that the cost of prescription drugs—many widely used by those on Medicare—far outstripped the price increases for other consumer goods and services.

Stephen W. Schondelmeyer, the co-author of the report and professor of pharmaceutical economics at the University of Minnesota, says the results "confirm yet again that drug manufacturers are raising prices far beyond what normal inflation is."

He says the drug industry has criticized AARP's past reports for focusing on manufacturer prices without taking into account discounts and rebates provided to consumers.

The AARP report found that all but six of 217 brand-name prescription drugs had retail price increases exceeding general inflation last year. The drug Flomax, generally prescribed for incontinence due to prostate problems, had the biggest price jump, climbing 24.8 percent in 2009. Flomax began facing competition from lower-priced generic drugs in early 2010.

For those taking drugs for a chronic condition, the average retail cost of brand-name medications in 2005—the year before Medicare Part D was implemented—was $1,049. By 2009, that had jumped about 32 percent to $1,382.

"The coverage of drugs under Part D was supposed to help give access to people who could not afford them," Schondelmeyer says. "But the drug prices have gone up since Part D began; they haven't gone down. We thought these plans would negotiate better prices, but they haven't."

The Pharmaceutical Research and Manufacturers of America (PhRMA), an industry trade group, said in a press statement today: "Although we have not seen AARP's latest pricing report, independent and government data continue to show prescription medicines represent a small and decreasing share of growth in overall health care costs in the United States."

"Not only is the recent rate of growth for prescription medicines historically low," the statement continued, "but the recent decline in drug spending growth has contributed to one of the lowest rates of total health care growth in the past 50 years."

John Rother, AARP executive vice president of policy and strategy, called for action by Congress and the drug industry to bring more competition and transparency to the marketplace. "Unless something is done to bring down their skyrocketing price increases, lifesaving medicines will be out of reach for too many."