A year after undergoing a kidney transplant, the 74-year-old patient was doing remarkably well. But when doctors reviewed his blood tests, they discovered an alarming mystery: Levels of the drug that was preventing the patient’s body from rejecting the transplanted kidney had dropped significantly. “We had no idea why at first,” says Joseph Boullata, associate professor of pharmacology and therapeutics at the University of Pennsylvania School of Nursing.

See also: Slideshow of 10 supplements that can interfere with your prescription meds — ginseng, kava, licorice and more. 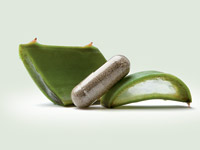 When taken orally, aloe vera may interact with medicine used to treat diabetes.

It wasn’t until the hospital pharmacist talked to the man’s daughter that they found the explanation. The patient had begun taking a dietary supplement that included Saint John’s wort, which is marketed to improve mood. “No one had mentioned it because no one really thought of it as a medicine,” says Boullata. But Saint John’s wort can speed the breakdown of some prescription medicines by eliminating them from the body before they can take full effect. If the blood test hadn’t alerted doctors, the supplement might have triggered rejection of the kidney — or even death.

Today, half of all Americans take dietary supplements, according to the National Institutes of Health’s Office of Dietary Supplements. Consumers spend more than $28 billion a year on vitamins, minerals and herbal remedies, in hopes that they’ll cure everything from insomnia to depression. And because many dietary supplements are touted as “natural” and are often sold in health food stores, it’s easy to assume they’re harmless.

While supplements can be harmful at any age, men and women age 50 and older are more likely to encounter problems. First, older people more often have chronic conditions like kidney or liver disease, which make it harder for the body to process compounds found in supplements. Then, too, they usually take more prescription drugs than younger people — and the more medications you take, the greater the risk of hazardous interactions with supplements.

The Food and Drug Administration regulates dietary supplements but does not apply the same rules it uses for medications. Manufacturers are not required to obtain approval from the FDA before marketing supplements. Under federal law, manufacturers are responsible for making sure their supplements are safe, and the FDA steps in only when troubles arise. Unfortunately, adverse interactions with prescription drugs may go undetected for a long time, even by physicians.

According to recent survey by the AARP Public Policy Institute, 59 percent of people 50 and older had used supplements in the previous month, and 52 percent took them daily. Fewer than half said they talked to their doctors about the pills they took.

“It’s a serious problem, and getting more serious as the number of medications and herbal products increases,” says K. Simon Yeung, a pharmacist and herbalist at Memorial Sloan-Kettering Cancer Center, where he manages a database of supplement information available to physicians and patients. According to Yeung, about 50 percent of cancer patients use some kind of dietary supplement to ease symptoms or side effects — or, out of desperation, in search of a cure.

Yeung is convinced some herbs help alleviate their symptoms. Unfortunately, several popular herbal supplements pose risks for people with cancer. Saint John’s wort, the same herb that washes antirejection drugs out of the body, can also speed the breakdown of certain cancer chemotherapies, robbing them of cancer-killing potency. And vitamin C, in megadoses, can interfere with the effectiveness of cancer drugs.

Next: Have blood clots? Beware of garlic supplements. »

Even garlic can be risky

Also at risk are patients taking drugs for depression or other psychiatric problems. Ginkgo and ginseng have both been linked to adverse interactions with psychiatric medications. Dietary supplements with psyllium, which is used as a laxative, can cause problems by reducing absorption of prescription medications, including carbamazepine and lithium, which are widely used to treat psychiatric symptoms.

The extent of the danger isn’t clear in part because so little is known about many of the active ingredients in supplements. The fact that ingredients in herbal combinations vary from batch to batch only complicates the problem. “There are 5,300 distinct dietary supplements, and very few of them have been studied systematically,” says Vanessa Grubbs, M.D., an expert in kidney disease at San Francisco General Hospital.

Grubbs began to be concerned about supplements when many of the patients coming to see her because their conditions had worsened told her they were taking them. Looking at a national health survey, Grubbs and her colleagues found that 6.5 percent of kidney patients were taking a supplement that contained one or more of 39 herbs considered to be dangerous for people with kidney problems, including nettle and sassafras.

Further, few dietary supplements have been tested to see how they interact with prescription drugs, so no one really knows which combinations are likely to cause trouble. “Pharmacologists can predict some potential interactions based on what we know about the biochemistry involved,” says Boullata. “But often we only discover there’s a problem when something bad happens.” A patient, he says, “has what looks like a heart attack or sudden unexpected changes in liver or kidney function. Eventually we discover that the cause isn’t their disease or their prescription medication but a dietary supplement they’re taking.”

And there are other hazards, such as contamination. In 2009, the FDA fingered 72 weight-loss products that contained ingredients not listed on their labels, such as traces of lead and arsenic.

Still, experts emphasize that some dietary supplements can be helpful. “Most dietary supplements are generally safe for most people at the recommended levels,” says Paul Coates, director of NIH’s Office of Dietary Supplements. He points out that supplements like calcium or vitamin B12 may be especially beneficial to people over 50 who have difficulty getting all the nutrients they need in foods.

The National Center for Complementary and Alternative Medicine also has useful information online about many commonly used dietary supplements. But the best place to start is with your doctor and pharmacist. Make sure they know if you’re taking a dietary supplement of any kind, including a multivitamin. And before you start taking any new supplement, no matter how “natural” or harmless it may seem, talk to your doctor or pharmacist.

Also of interest: Are you taking too many pain meds?