What Can the 1918 Flu Pandemic Tell Us About the End of COVID?

Both eras share similarities, and experts say some lessons from the past can be applied today 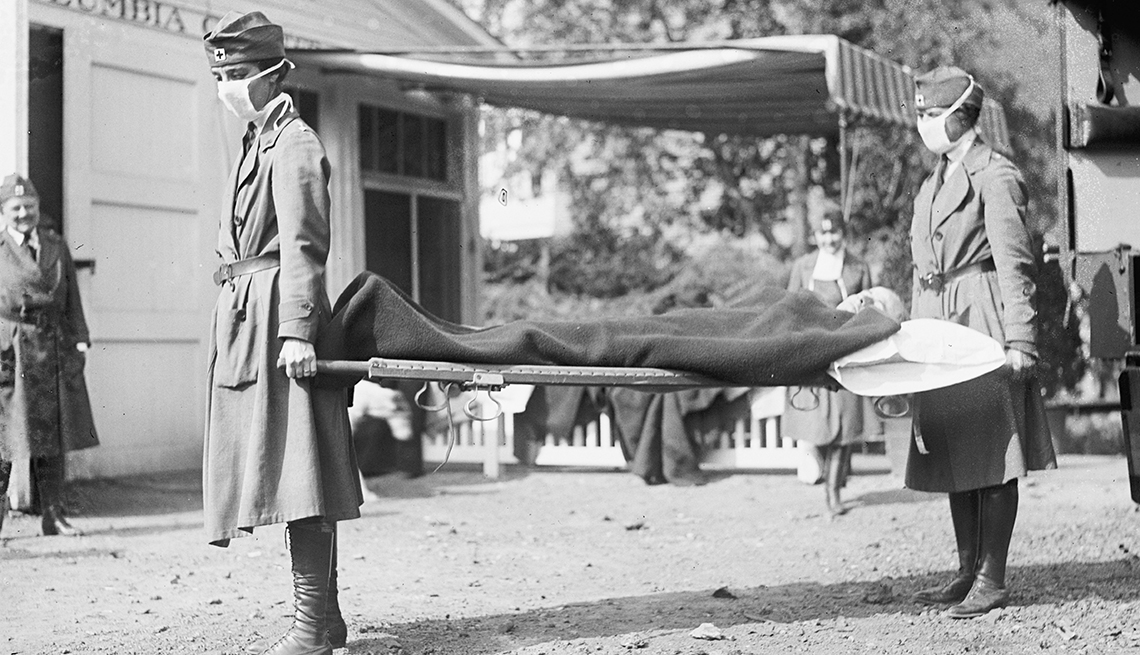 Demonstration at the Red Cross Emergency Ambulance Station in Washington, D.C., during the influenza pandemic of 1918
HUM Images/Universal Images Group via Getty Images
By:

Though they occurred more than 100 years apart, the 1918 influenza pandemic and the current COVID-19 pandemic share similarities. Both were caused by viruses that can trigger respiratory illness; both spread by respiratory droplets and aerosols; both prompted public safety efforts like face masks, social distancing and shutdowns; and both resulted in hundreds of thousands of ﻿U.S. deaths﻿ (and millions worldwide) that played out over a series of surges.

It’s no surprise, then, that many people are turning to the history books to see if this past pandemic can shed any light on when we might finally be on the COVID-19 exit ramp — especially now that new cases caused by the highly contagious omicron variant, while still high, are plummeting in many areas of the country.

But experts urge caution in comparing the two pandemics. There are commonalities, but “they are different viruses,” says John M. Barry, distinguished scholar at the Tulane University School of Public Health and Tropical Medicine and author of The Great Influenza.

“We can use [the 1918 flu pandemic] as a guidepost in some ways, but we can't really overlay them with each other,” adds Egon Ozer, M.D., an assistant professor at Northwestern University’s Feinberg School of Medicine and director of the Center for Pathogen Genomics and Microbial Evolution at the Havey Institute for Global Health. “What happened in that pandemic, we can't necessarily take as a given in this one.”

From pandemic to endemic

After a few fatal years, the virus that caused the 1918 pandemic eventually petered out. As population immunity from infection rose, deaths declined and the virus became a less lethal seasonal influenza — ﻿though descendants of it still circulate today, according to the CDC.

A growing number of scientists, including almost 90 percent of immunologists, infectious disease researchers and virologists polled by Nature, predict SARS-CoV-2 (the virus that causes COVID-19) will follow a somewhat similar path, in that it, too, could become endemic.

“Speaking very generally, what [endemic] means is that we, as a population, have a truce with the virus,” says infectious disease expert William Schaffner, M.D., a professor at Vanderbilt University School of Medicine. “The virus is reduced in its impact so that it doesn't disappear from our population — it's not totally gone. But you can think of it as smoldering. It continues to be transmitted at very low levels,” occasionally causing serious illness in vulnerable populations.

Hospitalizations and deaths are “substantially” reduced in an endemic stage, Schaffner explains, but they still occur. The seasonal flu, which is considered endemic, caused 12,000 to 52,000 deaths annually between 2010 and 2020, according to the CDC. Respiratory syncytial virus (RSV), another endemic virus, kills about 14,000 adults 65 and older every year, federal data shows.

Increased immunity, either by vaccination or natural infection, is what experts say will help to push us into this endemic state with COVID-19. After the end of the omicron wave, only a small sliver of the global population will be what scientists call “immunologically naive,” meaning that their immune systems will not have been introduced to the virus, according to Christopher Murray, M.D., director of the University of Washington’s Institute for Health Metrics and Evaluation.

Plus, new treatments like the oral antiviral pills from Pfizer and Merck will help to keep individuals who are at high risk for severe illness from getting seriously ill if they become infected, and tools like masking and testing can help tamp down on spread if there are flare-ups.

It’s possible that our immune systems “may have to be periodically reminded about COVID because the protection from vaccines or from natural infection with this class of viruses wanes,” Schaffner says. “It may well be part of the endemic circumstance that we will require periodic boosting.” This is not unusual for endemic diseases. The flu shot, for example, is recommended annually.

It’s unclear if SARS-CoV-2 will mutate into a less menacing version of itself, like the virus that caused the 1918 pandemic ultimately did. (It’s important to note that the descendants of the 1918 virus still went on to kill tens of millions of people over a century-long period following the pandemic, according to experts at the National Institute of Allergy and Infectious Diseases.) “They're different classes of viruses; just because it's a virus doesn't mean it's going to behave the same,” Schaffner notes.

There have been several coronavirus variants since the start of the pandemic — some have been more dangerous than others — and experts expect there will be more in the future. But, Ozer says, “there’s nothing to say that the virus will evolve to be more or less virulent, or more or less transmissible. It's just whatever happens to help it in the moment.”

Even with the emergence of a more threatening strain, it’s unlikely that we’ll see the same level of sickness and death that we saw during the dangerous delta variant wave, Murray wrote in a modeling insights blog, pointing again to increased immunity and greater access to effective treatments. Top infectious disease expert Anthony Fauci, M.D., has also said that even with the appearance of additional variants, the tools that we have and continue to develop will help “get us to the point where we will not be dominated by this virus — where we can return to a degree of normality that we all crave for.” 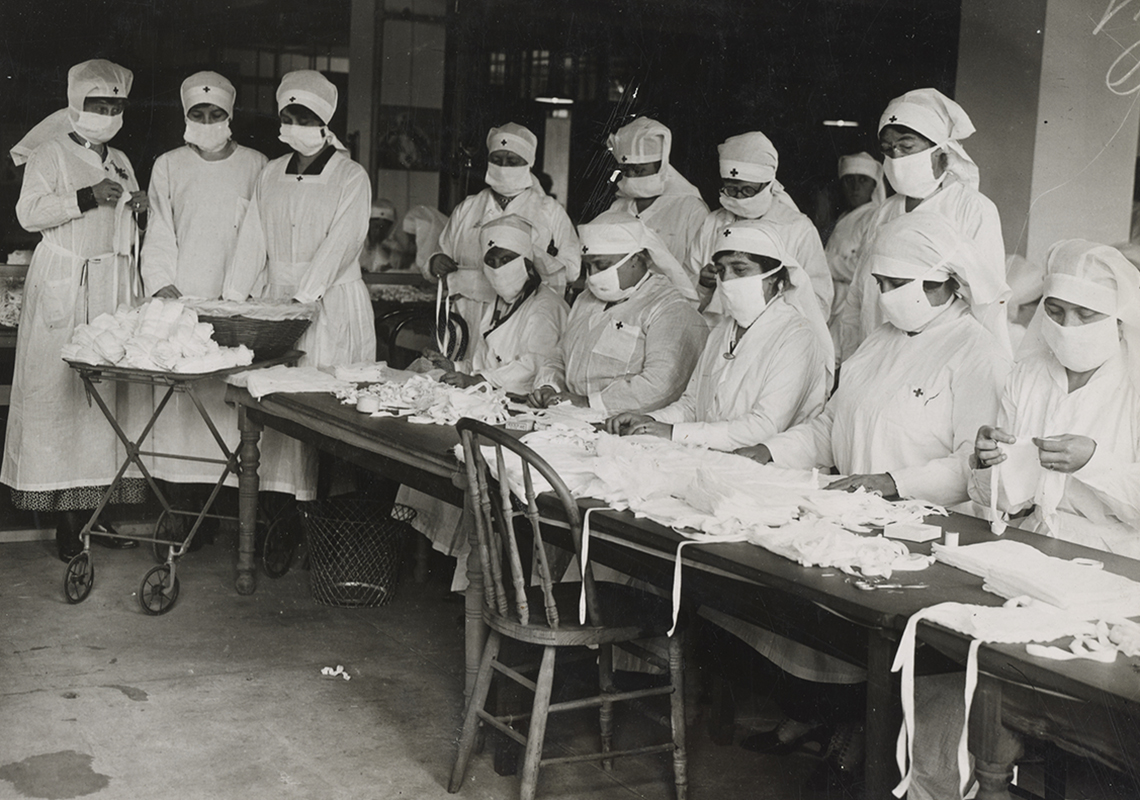 One way to help slow down the progression of additional variants is to increase global vaccination rates, says Mark McClellan, M.D., ﻿professor of business﻿, medicine and policy, and founding director of Duke University’s Margolis Center for Health Policy. The vaccines are most effective at protecting against serious illness, but “they also have an important protection — maybe a 50 percent reduction in [people] getting infected or transmitting COVID at all,” McClellan explained during a recent media briefing.

“If the virus can't transmit between people, then there's just that many fewer chances for it to adapt and change and become better at what it does,” Ozer says.

A flu shot was not around during the 1918 flu pandemic to help curb infection and transmission — the first flu vaccine was developed nearly two decades later. However, today’s seasonal influenza vaccines are expected to provide some protection against the 1918 ﻿virus that's still circulating today, the CDC says. Tamiflu and Flumadine, two antiviral treatments, also are expected to be effective.

Most historical accounts describe the 1918 pandemic in three waves, with the final wave ending in the summer of 1919. However, Barry says the end of the pandemic wasn’t so exact and that the virus didn’t start behaving like seasonal influenza until 1921. “But by 1920, people didn't pay much attention to it,” Barry explains, even though the virus continued to rip through major cities and kill many more Americans. “People got tired, just as we’ve gotten tired,” and behavior returned to normal.

Flash forward 100 years and the same sentiment is playing out. A report from the Kaiser Family Foundation has found that about 3 in 4 U.S. adults, across party lines, say that they are tired or frustrated with the pandemic. A poll from Monmouth University found that 7 in 10 Americans agree with the statement that “it’s time we accept that COVID is here to stay and we just need to get on with our lives.” 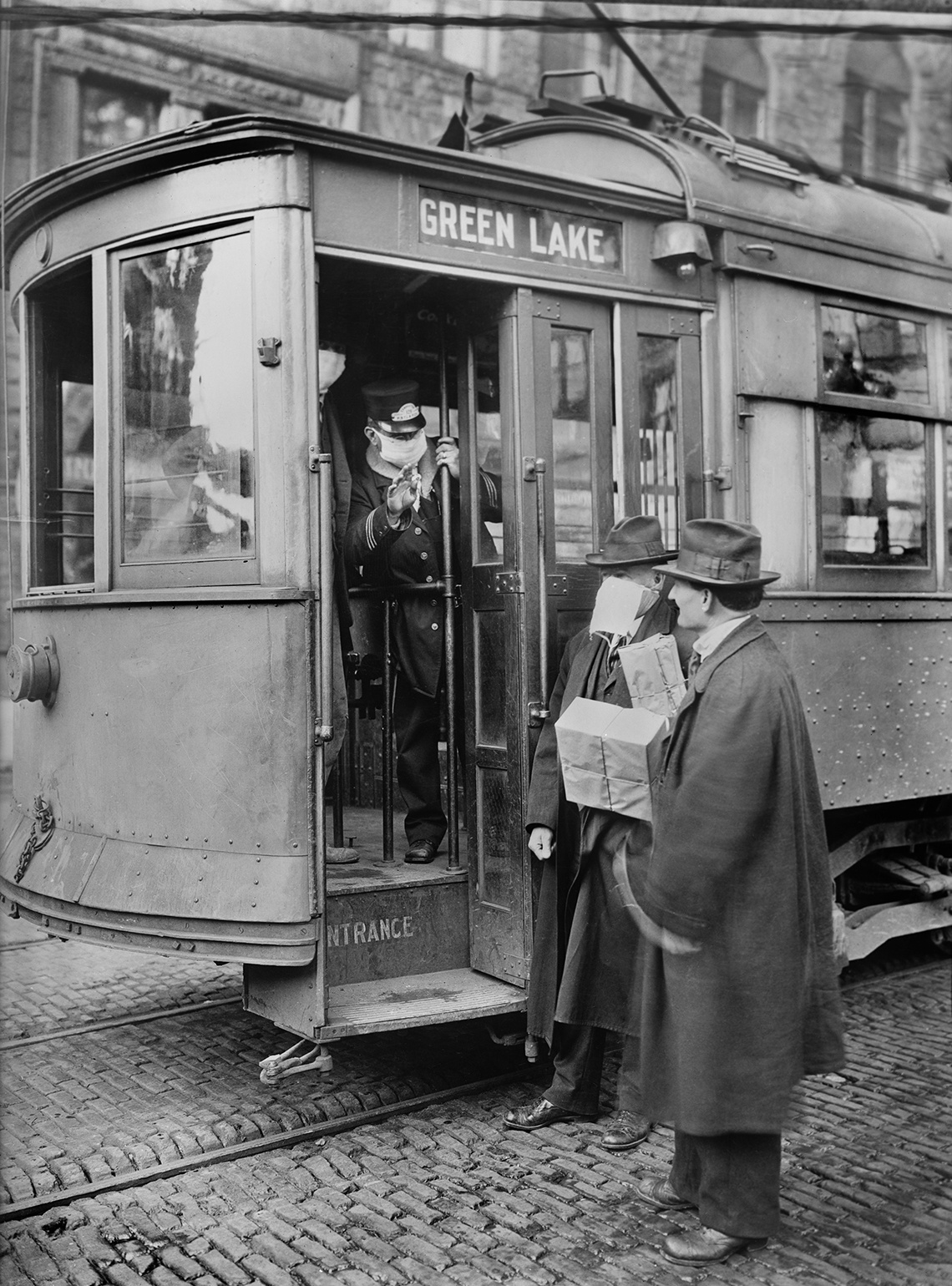 In a recent New York Times editorial, Barry urged Americans not to repeat the same mistake that was made in 1920. “I think we need to recognize that it's not over and to respond accordingly,” Barry tells AARP, adding that it’s impossible to predict when a true end to the pandemic will happen. His advice? “People need to be aware and take the risks that they're comfortable with.”

Barry offers up the example that he goes out to breakfast nearly every morning but, considering his own risks, still prefers a table outside.

Schaffner expects these so-called “learned behaviors” — opting for outside over inside, or putting on a mask in a crowded grocery store — will continue for many during a transition from pandemic to endemic. They could even become a more regular part of flu season precautions.

“It’s going to depend on how well we use all the other tools we have, in addition to vaccination, to keep us in something like normalcy in the future,” Duke’s McClellan says. “Part of the future may be each American kind of having a plan, just like you do for a hurricane or a bad weather event, for what you do if there is a surge to help keep you safe, help keep your family safe and help keep your community safe.”

Staying on top of global efforts should also fit into that picture, Schaffner says. “While we're transitioning from pandemic to endemic here, we need to work on that around the world, too.”

Timeline of the 1918 Flu Pandemic

Spanish Flu: How America Fought a Pandemic a Century Ago

What to Know About the Omicron Subvariant

A strain known as BA.2 is spreading in the U.S.