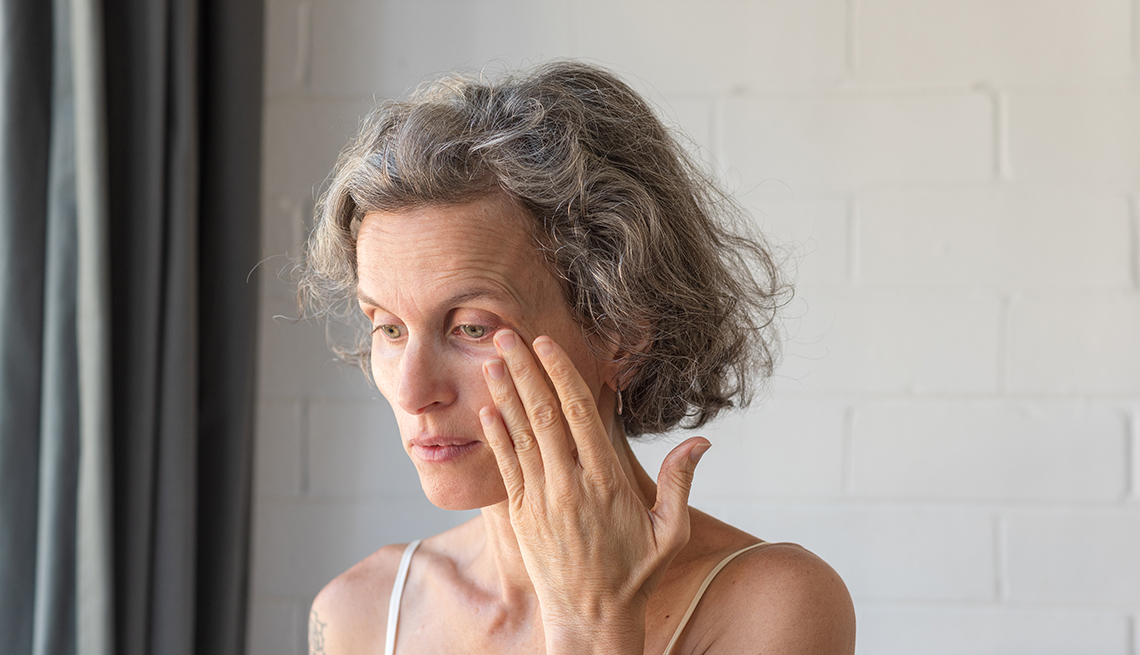 You flip on the bathroom light, look at your reflection in the mirror and come face-to-face with a pair of swollen eyelids. Unless you've gotten in the ring with pro fighter Conor McGregor or just finished a tearjerker marathon, you've probably got an ocular issue.

What's prompting the puffiness? It depends. Possible reasons can range from pollen to pink eye to — believe it or not — your last mani-pedi. Here are a few common causes.

It doesn't take much to upset the thin, delicate and, frankly, cranky skin around our eyes. “Contact dermatitis typically occurs when someone comes in contact with something that they have a sensitivity to,” says Michelle Andreoli, M.D., a Wheaton, Illinois–based ophthalmologist and spokesperson for the American Academy of Ophthalmology. “It could be poison ivy, the metal in the nose pad of your glasses or the material eyelash extensions are made from. Your lid will become sore, irritated, red and swollen.”

"The first step is to avoid the allergens or irritants that are causing symptoms,” advises Sumayya Ahmad, M.D., assistant professor of ophthalmology at the Icahn School of Medicine at Mount Sinai in New York City. And there's a conga line of possible culprits, including certain cosmetics, soaps, sunscreens, perfumes, eye drops and contact lens solutions. Even airborne substances can activate an allergic response.

"The fumes from nail polish in salons is a common thing my colleagues have been encountering as a cause of swelling,” says John Ng, M.D., professor of ophthalmology and an orbital trauma specialist at Oregon Health & Science University in Portland. Certain medications can also be triggers. “Using ocular medications that contain preservatives, such as glaucoma drops or some eye drops, frequently can lead to swelling and inflammation,” he adds.

Ask your doc about less irritating alternatives. If you're reacting to something that is physically irritating the surface of the eyelids, say, mascara, switch to hypoallergenic products. And consider wearing protective eyewear when venturing outside (extreme temps and wind can worsen the condition).

Keep the eye area clean and hydrated. Shower with a mild, fragrance-free cleanser before bed and as soon as you get up, to get allergens off your face and lashes. “Cool compresses can help by constricting the blood vessels to reduce swelling,” Ahmad explains. Treatments may include a moisturizing cream, available with or without an Rx, to soothe the skin, and a mild steroid-based cream, used short term, to ease inflammation.

It starts out small, but within a few days, this firm, painless lump or cyst, usually found above the lashes on the upper lid, can grow to the size of a pea. Chalazions, as they're known, are caused by a malfunctioning meibomian gland in the eyelid. The oil becomes too thick to flow out of the gland and causes a blockage. Over days or weeks, the gland continues to secrete oil. “Without anywhere to go, the oil builds up inside the gland, which blows up like a water balloon, causing a lump in the eyelid,” Ng says.

If you have a very small chalazion, try warm compresses for a day or two. “Wet a washcloth, throw it in the microwave for 10 to 15 seconds so it's hot but not so hot that it will burn your hand,” says Andreoli. “As soon as the washcloth gets cold, reheat to keep it moist and warm; then put it back on the eye. Do this for 10 minutes, up to six times a day, for several days, to help soften the hardened oil that is blocking the ducts.”

Gently massaging the lid, a few minutes a day, with a clean finger, can also help soften the hardened oil in the cyst. “A lot of chalazions will start to feel better and will drain, like a blemish erupting,” Andreoli says. Most go away completely without treatment, though they can reoccur.

If that bump won't budge, see your doctor. “We typically give patients a steroid-antibiotic combination,” Andreoli says. “The steroid helps with swelling and discomfort; the antibiotic prevents it from becoming infected.”

Still no success? It may require an injection of steroids or, sometimes, surgery. “If a chalazion is around for several months, the body doesn't like the constant irritation and inflammation, so it tends to form a thick-walled capsule around the area, making it hard to drain,” Ng explains. “Surgery may be needed to remove the capsule.”

This is a funny-sounding name for a condition that is anything but. In short, blepharitis is an inflammation of the eyelids. It has different causes, bacteria and mites among them. “But the most common thing that I see is blepharitis that develops as a result of the chronic skin condition, most commonly rosacea,” says Andreoli.

Indeed, it's estimated that ocular rosacea may affect the eyes of anywhere from 58 to 72 percent of rosacea patients. The condition often targets the oil glands near the base of the lashes. “Secretions become thicker, like sludgy toothpaste,” Ng notes. “That causes a blockage, which can lead to inflammation, redness and swelling.”

Rosacea rarely goes away completely, so it's important to get symptoms under control. “If you have chronic inflammation over many years, you can get a very slow, progressive scarring of the eyelid,” Ng says. In fact, research has found that approximately one-third of ocular rosacea patients could develop corneal problems that could potentially affect their vision. One potential complication, Ng warns, is that the eyelashes can start growing inward and rub against the cornea — a condition known as trichiasis.

To keep flare-ups to a minimum, “start with a warm compress,” Ahmad suggests. The heat will soften blocked plugs and get them to open, so secretions can start flowing. At least twice a day, massage the lids at the base of the lashes with a washcloth and baby shampoo (or a mild cleanser like Cetaphil) diluted with warm water, to loosen and express any debris from the clogged oil glands. (An over-the-counter scrub, specifically designed for the lids and eyelashes, such as OCuSOFT, can also help rid the area of oil and debris and keep it from getting infected.)

Even blinking has benefits, helping the eye secrete oil. Try some open-and-shut at least 20 times, four times a day.

Finally, avoid things that can trigger flare-ups. (Hint: Hot baths, spicy foods, caffeinated drinks and alcohol are not your friends.)

If heat, daily hygiene and lifestyle tweaks aren't doing the job, see your ophthalmologist, Andreoli says. Solving the problem may be as simple as applying a topical antibiotic. For acute redness and swelling, a corticosteroid may be prescribed (short term), to fight inflammation and bring down redness and swelling.

Simply put, preseptal cellulitis is an infection of the eyelid — and, yes, it's as nasty as it sounds, characterized by skin that's red, swollen and tender to the touch. “In most folks it comes from a cut or chalazion that has become infected, or from an infection from somewhere in the face,” says Andreoli. “That infection spreads into the soft tissues around the eye area and you can develop swelling."

If you suspect that you have preseptal cellulitis, schedule an appointment with your ophthalmologist. If not treated quickly, the infection can move even farther, behind the eyelid, and involve the eye socket (a condition known as orbital cellulitis). From there, says Andreoli, it can spread deep inside the eyes and travel to your brain. Preseptal cellulitis is almost always treated with oral antibiotics directed at the source of the infection.

Conjunctivitis (also known as pink eye) occurs when the conjunctiva — the thin, clear tissue lining the inner surface of the eyelid and covering the white part of your eye — becomes inflamed. Eyes can become reddish and itchy, sometimes with swollen, crusty lids, and you may have a watery or sticky discharge. Pink eye is most commonly caused by a virus, and it's contagious. Most cases of viral conjunctivitis improve without any treatment in a week or two, as your body recovers from whatever infection it had.

There's also something called allergic conjunctivitis, in which the immune system overreacts to harmless substances, leading to redness, watery discharge, swelling and other symptoms.