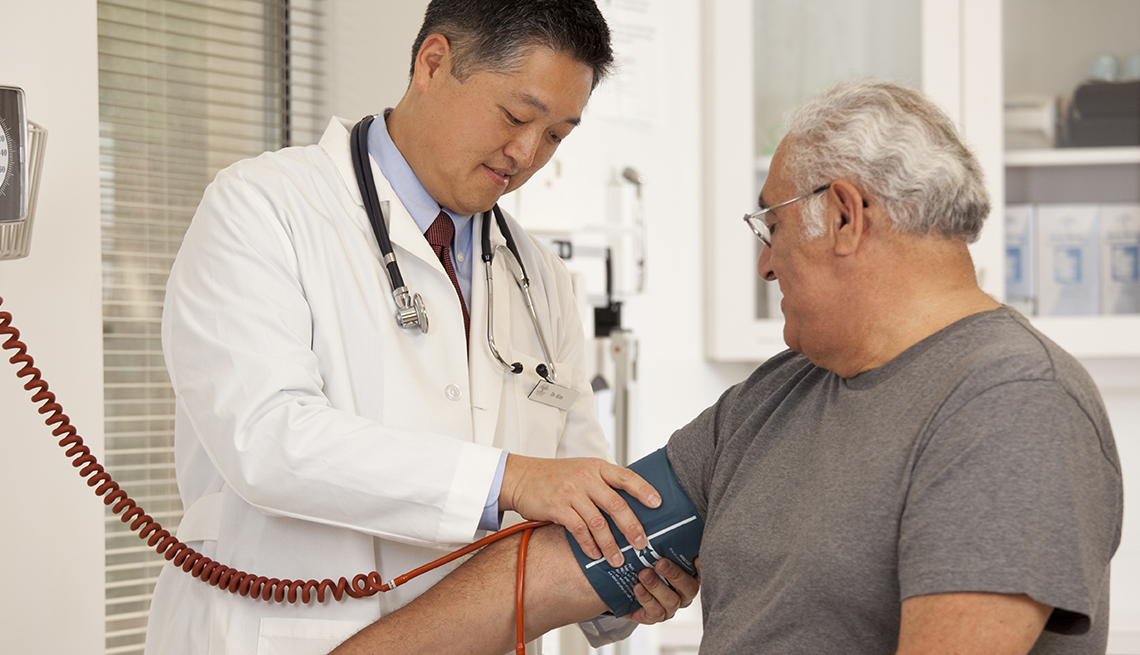 Takeout meals, sitting at a desk most of the day and an extra 20 pounds that you just can't shake — if that sounds like you, listen up. You're one of the millions of Americans at risk of developing metabolic syndrome, a cluster of health conditions that includes obesity, high blood pressure, type 2 diabetes and abnormal cholesterol.

"All of these conditions are related — if you're overweight, especially around your abdomen, that fat secretes hormones such as stress hormones that raise your blood pressure, blood glucose levels and levels of LDL ["bad"] cholesterol,” explains Dennis Bruemmer, a cardiologist at the Cleveland Clinic.

The relationship between heart disease and type 2 diabetes has become so interrelated now, that some experts in the field are even suggesting the creation of a new specialty: “cardiabetes.” “My patients are surprised to learn that all of these are so interconnected, but they are,” Bruemmer adds.

While around 1 in 3 Americans have metabolic syndrome, people over the age of 60 are particularly vulnerable, with about 1 in 2 affected, according to a 2015 study published in the Journal of the American Medical Association.

"It's become more common in people of all ages, including children, but older adults are especially at risk because they're also more prone to weight gain and developing chronic diseases such as hypertension as they age,” Bruemmer notes. But this condition, also known as insulin resistance syndrome, or Syndrome X, raises the risk of a whole host of conditions, including type 2 diabetes, heart attack and stroke.

Why it's so dangerous

To be diagnosed with metabolic syndrome, groups like the American Heart Association and the American College of Cardiology agree that you need to have at least three of the following five risk factors:

But even having just one or two of these risk factors is cause for concern. “About half of all patients that we diagnose with metabolic syndrome already have undiagnosed cardiovascular disease, such as changes in the walls of their blood vessels that haven't yet caused symptoms,” Bruemmer says. That's why staying on top of all of these conditions — and treating them aggressively — is key. Otherwise, people who go on to develop metabolic syndrome are at risk of several life-threatening conditions, including:

People with metabolic syndrome are more likely to develop a condition known as insulin resistance, in which your body's cells don't respond normally to the hormone insulin. This means glucose can't enter your cells as easily, so your blood sugar rises. Over time, that can lead to type 2 diabetes. A 2017 study published in the Journal of Epidemiology found that people with just two risk factors for metabolic syndrome were over four times as likely to develop type 2 diabetes over a five-year period, while people with four risk factors were about 10 times more likely.

Untreated or poorly controlled high cholesterol and blood pressure can lead to the buildup of plaque in your arteries, causing them to narrow and harden. As a result, people with metabolic syndrome are three times more likely to have a stroke or heart attack than those who don't have it, according to the American College of Cardiology.

People with metabolic syndrome have a 55 percent increased risk of developing kidney problems, according to a Cleveland Clinic review published in the Clinical Journal of the American Society of Nephrology.

How to reduce your risk

There's no magic pill to reverse metabolic syndrome, but you can help reduce your risk of developing potentially deadly complications by getting various risk factors under control, Bruemmer says.

Lose weight. Shedding as little as 5 to 10 percent of your body weight can help restore your body's ability to recognize insulin, lower your blood pressure, increase HDL levels and lower triglycerides, says Peter Goulden, M.D., medical director of the Division of Endocrinology and Metabolism at Mount Sinai St. Luke's Hospital in New York City. One good way to do this is to follow the Mediterranean diet, which emphasizes fruits, vegetables, whole grains, legumes, nuts and healthy fats found in foods such as fish and olive oil. Patients with metabolic syndrome who followed this eating plan saw significant reductions in both blood sugar levels and abdominal fat, according to a 2014 study of nearly 7,500 people published in 2014 in the Canadian Medical Association Journal.

Time your eating. Adults with metabolic syndrome who only ate within a self-selected 10-hour daily period for 12 weeks lost a significant amount of weight, particularly around their abdomen, and also lowered their blood pressure and saw improvements in their cholesterol levels, according to a study in the journal Cell Metabolism.. “When you eat within a 10- to 12-hour window, you're following your body's natural circadian rhythms, which allows your body to burn fat more efficiently,” explains Pamela Peeke, M.D., assistant professor of medicine at the University of Maryland School of Medicine and author of The Hunger Fix . It also prevents you from falling into the trap of night eating, which raises your risk of developing insulin resistance.

Get enough rest — and stick to a consistent sleep schedule. Sleep deprivation has long been linked to weight gain and an increased risk of heart disease and type 2 diabetes: It raises levels of hunger hormones such as ghrelin, as well as stress hormones like cortisol, Goulden says. But regular bedtimes and wake-up times are important, too. Every hour of variability in your bedtime raises your risk of developing metabolic syndrome by 27 percent, according to a study published this past June in the American Diabetes Association journal Diabetes Care. “When you're constantly changing your sleep and wake times, it can interfere with your circadian rhythms, which in turn can affect things like levels of stress hormones and blood glucose levels,” explains Michael Breus, a sleep specialist in Los Angeles and author of The Power of When.

Lift weights. Exercise itself can help reduce risk of metabolic syndrome by helping you lose weight, lower your blood pressure levels and raise your HDL cholesterol. Aim for about 30 minutes of moderate to vigorous activity (like brisk walking or jogging) most days of the week. But resistance training is especially key. People who regularly lift weights are about a third less likely to eventually develop metabolic syndrome, according to a study published in the Journal of Strength and Conditioning Research. “Weight training helps you build muscle mass, and we know that people who are lean generally have a lower risk of metabolic syndrome,” Goulden explains.

Know your numbers. The only way to “treat” metabolic syndrome is to get your weight, blood pressure and cholesterol under control. While losing weight is important, it's particularly key to target your middle. A 2019 JAMA Network Open study of more than 155,000 postmenopausal U.S. women found that those at normal weight whose waist circumference was over 35 inches were almost one-third more likely to die from cancer or heart disease than women with a normal body mass index (BMI) and a smaller waist. The likely reason: Fat around the abdomen — visceral fat — causes your body to secrete stress hormones. These hike blood pressure and blood glucose levels, says study coauthor Wei Bao, M.D., an epidemiologist at the College of Public Health at the University of Iowa in Iowa City. Aim for less than 35 inches if you are a woman and less than 40 if you're a man.

It's also key to know your cholesterol levels. Since high levels of LDL cholesterol increase the risk of coronary artery disease, in people with metabolic syndrome, an LDL level of less than 80 to 100 mg/dL is recommended. If yours is high, talk to your doctor about possibly taking a cholesterol-lowering medication such as a statin.

The only way to raise HDL levels and lower triglyceride levels is through lifestyle measures such as losing weight, eating a healthy diet and exercising. Your target blood pressure should also be under 130/80. So if you can't get there through diet and exercise, talk to your doctor about possibly going on a blood pressure-lowering medication, Bruemmer says.

More on Conditions and Treatments