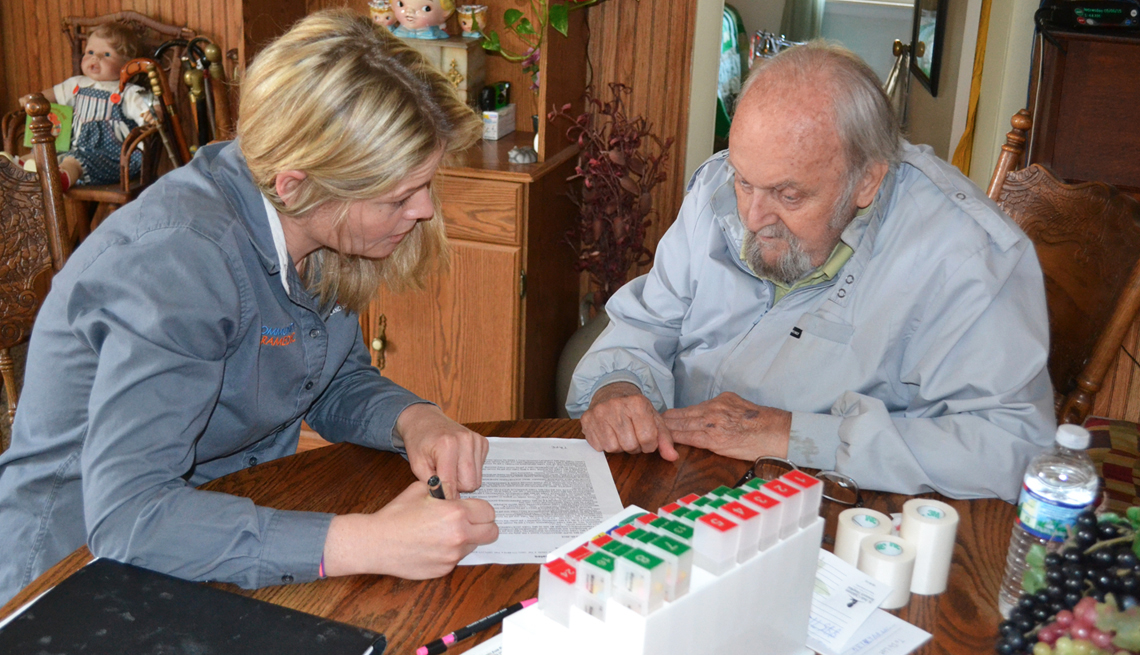 En español | When Jeff Woolsey returned to his job at the Alexandria, Virginia, Fire Department after Thanksgiving, he had a small stack of papers on his desk from colleagues who spent the holiday weekend responding to emergency calls.

One note asked Woolsey, an emergency medical services (EMS) captain, to check on an older resident who is in declining health and living in “less than optimal conditions"; another requested that he visit a local man who is having a difficult time providing care to his mother after a stroke. Dressed in his uniform — not a fireproof jacket and helmet but a gray collared shirt — Woolsey hopped into the station's Ford Explorer and headed out for a day of home visits.

After 28 years of responding to emergency calls, Woolsey is now the city's community paramedic. It's his job to help prevent those emergency calls from coming in.

He tapes down trip hazards, such as telephone cords and throw rugs, in the homes of adults who have suffered recent falls and makes sure community members with chronic conditions take their medications correctly. He connects people with local food and transportation services and has even helped a few residents obtain handicapped parking spots and disability-compliant housing. And he does it all without sirens and stretchers.

"One of the best parts of my job is just getting out and having a conversation with people,” says Woolsey, who has been Alexandria's community paramedic for about two years. “And sometimes it's just [helping them make] simple changes.”

Community paramedicine programs such as the one Woolsey oversees have become more common throughout the country in the past decade, especially in rural communities where access to health care is increasingly limited. Since 2005 more than 160 rural hospitals have closed, according to data compiled by the University of North Carolina, leaving many residents with longer commutes to both emergency and preventive services.

Distance is what keeps many people in rural Idaho from “getting the health care they need,” says Wayne Denny, chief of the Bureau of Emergency Medical Services and Preparedness at the Idaho Department of Health and Welfare.

"If someone needs to have a blood sample drawn for lab work, that may be put off for weeks because someone's not going to take a day out of their life to travel to the nearest larger town where there's a clinic. It really delays the care,” says Denny, who is building a community paramedic program in Idaho to reduce emergency room admissions.

He envisions a scenario in which a community paramedic or EMS professional stops on the side of the road “and somebody hops off a tractor” to get their blood drawn or receive another form of care. “And then we're able to keep those individuals healthier, keep them working, keep them out of the emergency room, keep them out of the hospital,” Denny says.

Community paramedics can check on high-risk patients routinely (even if it's just to fill a water bottle or change the thermostat) and visit those recently released from the hospital to explain confusing discharge instructions, so their chances of readmission are less likely.

By bringing health care to the people, Denny notes, community paramedicine is “an answer to a problem that we've been wrestling with for a long time.”

There's been a recent push from policymakers to reduce hospital readmission rates and emergency department visits, both of which cost the health care industry billions of dollars each year. And advocates of community paramedicine say its model can help achieve those goals.

"Many times we pick patients up when they're really sick, and if we were there three or four days earlier to help them manage their diabetes or other conditions, maybe we wouldn't have to show up at 3 a.m., when they're in dire straits, and take them to the hospital, where they're then going to be admitted for three or four days,” says Dennis Russell, a paramedic and community paramedicine manager for United Ambulance Service in Lewiston, Maine.

Preliminary results from a three-year program at Regions Hospital in St. Paul, Minnesota, revealed that more than half of the study's 111 hypertensive or diabetic participants who received regular home visits from paramedics for nonemergency care lowered their blood pressure and blood sugar levels. The program also resulted in a “significant decrease in both emergency department visits and hospital readmissions,” just by having a paramedic help deliver medication, monitor vital signs and conduct home evaluations. Other studies conducted in the U.S. and Canada report similar findings.

"It's a very efficient way of caring for the patient that is less costly,” observes Michael Wilcox, a physician who has been helping the Minnesota Department of Health launch a number of community paramedicine programs and trainings throughout the state since 2009.

"If you ask the patients and their families about which direction they would rather go for their health care, most often they'll say, ‘I prefer to be seen in my home. I want to be taken care of proactively before I end up with a medical emergency that will lead to my having to go to the emergency department.’ "

Seeing patients in their home has its advantages for medical professionals, too. Russell and his colleagues were able to help a diabetic man avoid a medical emergency when they noticed that he wasn't removing the cap from his insulin injector. For some time, the patient was having trouble managing his blood sugar levels, all because “he was never getting the insulin that he needed,” Russell says. “We never would have noticed that” if we were not in the patient's home, he adds.

Fitting into the future of health care

Patients come to community paramedicine programs in different ways. Woolsey, in Alexandria, Virginia, combs through Fire Department data looking for residents who frequently call 911 and for older adults who called after a fall. He also coordinates with local hospitals to visit people who have recently received a heart pump (a left ventricular assist device, or LVAD) and relays their care needs to the nearest firehouse, should an emergency call come in.

Russell, on the other hand, visits adults referred from primary care physicians whose packed schedules don't allow for home visits. Many of the patients he and his colleagues care for don't qualify for home health services and lack support networks at home. A community paramedic helps “bridge that gap” between doctor's visits, Russell says. “I really see it as being an invaluable tool for the primary care physicians.”

Although states from California to South Carolina have had success with community paramedicine programs, the biggest “hurdle” that's keeping the model of care “from absolutely exploding” is the compensation piece of it, Idaho's Denny points out. Traditional ambulance rides to the hospital and routine doctor's visits are mostly covered by private or public insurance. Community paramedicine, on the other hand, falls into a gray area.

Different communities fund their programs in different ways. The Alexandria Fire Department, for one, pays for Woolsey's full-time community paramedic position. Others, like Russell, operate through a patchwork of grants. Some programs, including those in Minnesota and Idaho, have had luck getting state programs and commercial insurers on board with reimbursements.

The Centers for Medicare & Medicaid Services (CMS) does not reimburse community paramedics for home visits or scheduled appointments. But it will begin testing a new program in the spring of 2020 that “will reimburse ambulance suppliers or providers for transporting patients to alternative destinations (rather than an emergency department) and/or for treating patients in place” when an emergency call comes in, the agency tells AARP. The aim is for patients to “receive the most appropriate care, at the right time and in the right place.”

Still, Wilcox says it's only a matter of time before insurance companies and other payers get on board with community paramedicine.

"If you can take care of these patients less expensively, more efficiently — not in a hospital or clinic — at the end of the pay period, the health care organization comes out ahead financially,” he explains.

In the meantime, the movement toward more at-home preventive care will continue to grow.

"It's not a matter of if, it's a matter of when, community paramedicine really takes hold,” Russell says. “It's something that I don't believe is a fad anymore. … It enables us to deliver a full spectrum of care.”