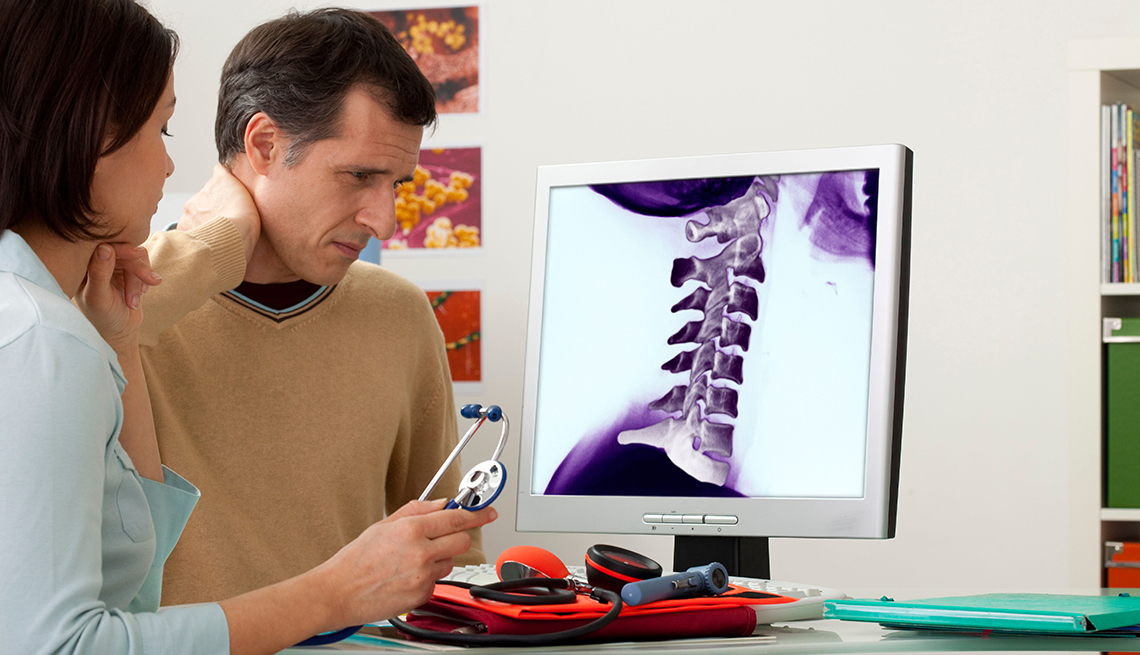 En español | Before the morning I was jolted awake with one of its more mysterious symptoms, I had never even heard of degenerative disc disease, though I was certainly aware of the intense tingly, buzzing sensation that was shooting down my arms and into my hands.

Shaking out my arms and hands didn’t help; it still felt as though I’d pressed my fingers against electrical outlets and shocks radiated up and down my upper limbs.  Though they ebbed and flowed throughout the day, the seriously uncomfortable vibrations returned in force as I drove to an appointment that afternoon — and that’s when I began to fear that something was seriously wrong.

When the symptoms didn’t go away after a few days, I went to see my internist, who was as mystified as I was. Because I didn’t have any other symptoms, she thought these neurological signs might be due to Lyme disease, celiac disease or a vitamin B-12 deficiency, and sent me for a battery of blood tests, all of which turned out to be negative. Next up: a visit to an esteemed neurologist who examined me for multiple sclerosis (negative) and did special, and painful, nerve conduction tests to see if I had nerve damage in my extremities (thankfully, I didn’t). After another slew of blood tests yielded no insights, on a hunch, the neurologist sent me for an MRI of my neck. Sure enough, three bulging discs were pressing on my spinal cord, causing the tingling, shock-like sensations. After six weeks of stress and discomfort, the mystery was solved! The diagnosis: degenerative disc disease and cervical stenosis (a narrowing of the spinal canal in the neck).

Little did I know that one-third of women and men between the ages of 40 and 59 show evidence of degenerative disc disease on CT scans; the prevalence doubles among those ages 60 to 69 and quadruples for those 70 to 79, according to a 2018 report from the Framingham Study. It turns out that degenerative disc disease in the neck is 38 percent more common among women than men, according to a study at the Loyola University Medical Center in Maywood, Illinois.

Yet, the term is actually a bit of a misnomer because “degenerative disc disease” is not actually a disease. “It’s very much a normal part of aging, where we develop some wear and tear of the discs in our spine; we all get it to some degree,” says Alpesh A. Patel, M.D., a professor of orthopedic surgery and neurological surgery at the Northwestern University Feinberg School of Medicine in Chicago.

Getting to the sources of the problem

The discs in the neck and back are basically space holders between different bones (vertebrae) in the spine — and they serve as cushions or shock absorbers. As we get older, “the discs begin to dehydrate, which contributes to wear and tear of the material that composes the discs,” explains Andrew Gitkind, M.D., vice chair of the Department of Physical Medicine and Rehabilitation and medical director of the Montefiore Spine Center at Montefiore Medical Center in the Bronx.

Genetic factors play a role, so if your parents had or have this condition (like mine do), you’re at higher risk. Playing heavy impact sports such as football, soccer or hockey, can increase your susceptibility, as can activities like running or golf. Meanwhile, excess body weight and smoking can worsen disc degeneration. “Smoking decreases the body’s ability to carry oxygen in the blood, which means the discs are likely to degenerate more quickly,” Gitkind notes.

Many people have degenerative disc disease without any symptoms. When symptoms do occur, pain and stiffness are the primary complaints. “The most common way people find out they have it is they have episodes of neck or back pain, seek appropriate medical care and get an MRI that shows degenerative changes,” Patel says. These changes can include bulging discs, like I had, small tears in the discs, herniated discs (when part of the disc’s center pushes through the outer edge) or flattened discs. In some cases, such as mine, these changes place pressure or impinge on the nerves, which can cause pain, tingling, numbness or weakness in the arms (if the problem occurs in the neck) or in the back and legs (if the wayward discs are in the mid- or lower spine).

Unfortunately, there isn’t any way to reverse the problem. If you have signs of degenerating discs without symptoms, consider yourself lucky. But if you have back or neck pain, “we start with conservative management — physical therapy and strengthening of the surrounding muscles, particularly the abdominal, oblique and back muscles,” Gitkind says. “The more support we can provide the spine, the less wear and tear there is.”

If flare-ups of pain occur in the back or neck, taking an anti-inflammatory drug such as ibuprofen may help. If there are neurological symptoms from pressure on the nerves in the spinal cord, cortisone injections may be in order,  Gitkind says. If there’s severe disc degeneration and nerve compression in the back or neck, you might be a candidate for minimally invasive microdiskectomy, which involves removing the disc fragment that’s putting pressure on the spinal nerve, Patel says. If stenosis gets more severe, surgeons begin to consider “more invasive surgery such as spinal fusion, in which the problematic disc is removed and the adjacent bones are knitted together,” he adds.

I wasn’t a good candidate for surgery or cortisone injections. My neurologist decided we should take a watch-and-wait approach with some considerable modifications to my lifestyle. That meant: no more running (too jarring to the spine), no more riding roller coasters (a serious bummer for my kids), avoiding activities that involve hyperextension of the neck (including certain yoga postures, breaststroke, even the way I have my hair washed at the salon), and making postural adjustments to my desk chair and computer height.

If you spend a lot of time in front of a computer, experts say that using a sit-to-stand desk might help take some of the pressure off your neck and spine, for example. If you must sit, set a timer to cue you to get up every 30 minutes to stretch and walk around.

Seven years later, I still get occasional stiffness and achiness in my neck and, less frequently, tingling sensations, but I’m happy to report that my symptoms have greatly improved over time. I’m hoping to maintain these improvements for as long as possible. If my condition does get worse down the road, hopefully new treatments will be available by then. “There is a tremendous amount of work being done to look for ways to treat degenerating discs,” Patel says, “but it’s still in the early stages.”