We know that some alcohol appears to be good for heart health, but now researchers say you need to know how often to drink that wine or gin or Scotch.

In the latest study on how drinking habits affect heart health, occasional heavy drinking or bingeing — as many tend to do at holiday gatherings — was found to later double the risk of heart attack and death from heart disease. 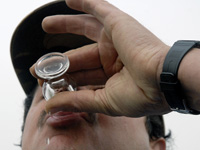 Don't count on full stomach. "Food plays a role in how quickly alcohol is absorbed but it won't mask the [heart-damaging] effects of binge drinking," says Cullen.

European researchers looked at Irish and French drinkers to compare binge drinkers with those who drank almost daily but more moderately. Their study, reported in the British Medical Journal, looked at the drinking habits and the death and disease rates of 9,778 men in their 50s living in Ireland and France. Although the Irish consumed less alcohol in a given week, they tended to drink more heavily during weekend binges, averaging about five drinks per night. The French, meanwhile, averaged three drinks every day.

None of the men had any signs of heart disease at the start of the study. After accounting for factors such as cholesterol levels, blood pressure and weight, researchers determined that over a 10-year period, the Irish binge drinkers had twice the risk of heart attack or death, along with other problems caused by reduced blood flow.

Binge drinking is usually defined as five or more drinks on one occasion for men and four for women, whereas moderate drinking is considered one drink a day for women and no more than two drinks a day for men.

"It may be surprising to know that drinking 14 drinks per week in a twice-daily fashion can actually reduce your risk of heart disease, whereas having the same 14 drinks over just two days can promote heart disease," says John Cullen, associate professor at the University of Rochester Medical Center, who was not involved in this study but is a longtime researcher on the effects of binge drinking on cardiovascular health.

"There's a fine line; alcohol can either protect or damage your heart," Cullen says, adding that the "very interesting study" yet again "highlights the importance of the effects of patterns of alcohol consumption on heart disease."

Two years ago, he found that occasional binge drinking increases the inflammation of blood vessels — reducing blood flow and potentially damaging the heart.

Other studies indicate that occasional binge drinking is associated with "holiday heart syndrome" — irregular heart rhythms, rapid pulse, shortness of breath and spikes in blood pressure. So the bottom line: Enjoy that holiday cocktail or glass of wine, but don't drink enough to put your heart — and perhaps your reputation — at risk.